This time of year, when the veil is thin, is a great time to make a pilgrimage to thank our forefathers in horror.

Seeing Stars says, “If you had to choose only one Hollywood cemetery to visit, Westwood Village Memorial Park would be your best bet.” In addition to all the movie stars, Westwood has its share of writers. Author of In Cold Blood  Truman Capote’s ashes are in a niche facing the cemetery entrance. The ashes of Robert Bloch, author of Psycho, are in the Room of Prayer columbarium beyond Marilyn Monroe. Billy Wilder, screenwriter of Sunset Boulevard, has a headstone that reads, “I’m a writer, but then nobody’s perfect.” Near him lies Ray Bradbury, whose headstone remembers him as the author of Fahrenheit 451 but to me, he’s the author of Something Wicked This Way Comes.

Westminster Abbey has served as the site of every British coronation since 1066. The tradition even predates the modern Gothic building, which was begun by Henry III in 1245. The abbey is stuffed nearly to bursting with mortuary sculpture, which is — unfortunately — forbidden to photograph. The abbey’s website says, “Taken as a whole, the tombs and memorials comprise the most significant single collection of monumental sculpture anywhere in the United Kingdom.” Charles Dickens — author of A Christmas Carol, the most-filmed ghost story in the English language — was interred here against his will, rather than being buried alongside his family in Highgate Cemetery.

In the last half of the 19th century, Harper’s Magazine sent Lafacadio Hearn to Japan. Although he soon parted ways with his editors, he loved the country and wrote book after book describing it to Western readers for the first time. While his tales drift in and out of fashion in the West, he is still revered in Japan. His most famous work is Kwaidan: Stories and Studies of Strange Things, a collection of Japanese ghost tales comparable to the work of the Brothers Grimm. Those stories inspired Akira Kurosawa’s 1964 movie of the same name, which won a Special Jury Prize at Cannes and received an Academy Award nomination for Best Foreign Film. Hearn is buried under his Japanese name, Koizumi Yakumo.

Walking up the hill from the parking lot between the Old Dutch Church and the Pocantico River, you’ll find the author of The Legend of Sleepy Hollow. Just shy of the crest of the hill, Washington Irving rests inside a simple iron gate emblazoned with his family name. A plain marble tablet, streaked green with lichen, marks his grave. According to a bronze plaque placed in 1972 by remaining members of the Irving family, the “graveplot” is now a national historic landmark.

The most famous of the New Jewish Cemetery’s denizens is easy to find, thanks to good signage. Franz Kafka’s monument is a top-heavy six-sided obelisk made of pink-and-gray granite. He died in 1924 of tuberculosis, in agony from his hemorrhaging lungs. All of his novels remained incomplete and unpublished at the time of his death, so only a few friends mourned him. Kafka shares his grave with his mother and hated father. In fact, he predeceased them both. He’s commemorated as Dr. Franz Kafka, in deference to his law degree. An inscription on a marble plaque at the base of the monument remembers his three sisters, who vanished into the Nazi death camps.

Jack London was among the most widely read authors of his time. His short story “To Build a Fire” has scarred schoolchildren for almost a century. Four days after his death on November 22, 1916, Charmian London placed her husband’s ashes on a small rise behind the ruin of the house they had been building together in Northern California. She marked the grave only with a large lava rock from the Wolf House ruin. The boulder is strangely shaped: a weird, worn, organic form for a rock. Moss covers it like velvet, softening its broken edges.

Lovely Swan Point’s most famous permanent resident is Howard Pillips Lovecraft. An obelisk labeled Phillips marks the plot belonging to Lovecraft’s grandparents. The back of it holds Lovecraft’s parents’ name and dates. At the bottom, he is remembered as Howard P. Lovecraft, “Their Son.” A smaller stone purchased by Dirk W. Mosig — the leading authority on Lovecraft in the Seventies — was unveiled during a small ceremony in 1977. The low granite marker spells out Howard Phillips Lovecraft, August 20, 1890 — March 15, 1938, with the epitaph, “I am Providence.” Those words came from a letter Lovecraft wrote to his Aunt Lillian, eventually published in 2000 in Lord of a Visible World: An Autobiography in Letters, edited by S. T. Joshi and David E. Schultz.

Westminster Hall’s best-loved resident lies just inside the gates. A large monument marks the grave of Edgar Allan Poe, his wife Virginia, and her mother Maria Clemm. Poe was originally buried in 1849 the plot of his grandfather David Poe, elsewhere in the churchyard. His unkempt grave went unmarked for decades, despite several attempts to provide a suitable monument. Eventually, he was moved to this more prominent plot when his mother-in-law died in November 1875. It took 10 years before his wife was exhumed from her grave in New York and reburied in Baltimore beside him. 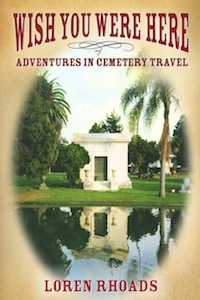 The author of The Strange Case of Dr. Jekyll and Mr. Hyde decided to stay in Samoa in 1899. In December 1894, when Stevenson died of apoplexy (a brain hemorrhage), he was 44. Local Samoans built him a hardwood coffin and stood guard over his body through the night. The following day, they cut a road through the jungle to his gravesite, which they called the “Road of Loving Hearts.” Working in relays, they carried the coffin to the grave. Stevenson was buried just below the 1560-foot summit of Mount Vaea in a tomb overlooking his family estate Vailima and the ocean.

One of the oldest crematories in England, Golders Green may also be the best-known crematorium in the world. Over the years, many famous people have chosen to be cremated there. Some remain there in urns in the columbarium or beneath rosebushes in the garden. The current crematorium was completed in 1939. Its three columbaria contain the ashes of thousands of Londoners. London’s Cemeteries says Golders Green is “the place to go for after-life star-spotting.” My hero Bram Stoker is in one of the columbaria, which can be visited with a guide.

Some of horror’s progenitors have no graves. After H.G. Wells was cremated at Golders Green, his ashes were scattered over the Dorset coast. Shirley Jackson’s son was given her ashes after she died in 1965. Angela Carter’s ashes aren’t easy to visit either. I can’t seem to find where they ended up.

Any list of graves is likely to be deeply personal. I’m working through visiting the graves of these writers, who have all inspired me. Whose graves would you visit?

TODAY’S GIVEAWAY: Loren is offering a paperback copy of Wish You Were Here: Adventures in Cemetery Travel to someone who answers the question above in the comments below. Or e-mail your answer to membership@horror.org with the subject line “HH Entry.”

LOREN RHOADS is the author of Wish You Were Here: Adventures in Cemetery Travel, co-author of As Above, So Below, and editor of The Haunted Mansion Project: Year Two.  All three books are available from Amazon.com (http://www.amazon.com/Loren-Rhoads/e/B002P905PE/ref=sr_ntt_srch_lnk_1?qid=1378785502&sr=8-1). You can follow her morbid antics at http://lorenrhoads.com/.

9 comments on “Halloween Haunts: Where Horror Lies by Loren Rhoads”