I grew up in a relatively safe neighborhood in Colorado Springs, which was why, when I went trick-or-treating in fourth grade, I was allowed to go with a small group of friends and no adult supervision, and how I ended up alone at the mouth of a dark tunnel, my friends no longer answering my pleas.

I was a shy kid and didn’t like going up to people’s houses, even for candy, so as the night wore on and several of my friends went home and I was left with only my good friends Sam and Brad, I suggested we go down to the creek, a place where I liked to play during the day, but had never been to at night. “The creek,” as we called it, was actually little more than a sandy trench cut through the neighborhood, separating the middle-class houses from a large apartment complex, where the water drained. As we stood in the grass at its edge, I felt a little uneasy. The ground was dark, the rivulets of cold water even darker.

We jumped and landed in the sand and walked.

“Check it out,” Brad said when we came upon a tangle of branches that had washed up against a large rock. Inside the tangle were various Halloween decorations—orange and black streamers that looked gray and black under the moonlight, some cardboard cutouts of leering pumpkins and ghosts, some empty trick-or-treat buckets, a plastic tombstone, a pair of rubber rats, and a couple of masks, one of which had either caught or been hung from a protruding branch like a severed head upon a spike. Brad ripped the mask free, put it over his head, turned to us, and growled.

The mask made Brad look like a shaggy werewolf with barred yellow fangs.

“You shouldn’t put that on your head,” Sam said. “You don’t know where it’s been.”

Brad removed the mask, sputtering. “Uck,” he said. “It’s full of sand.” He dropped the mask and kicked it away. He brushed at his hair and face with his hands.

“Who do you think put this stuff’s here?” I asked.

“Who cares?” Brad said. “Probably washed up the last time it rained.”

We continued down the creek until we got to the drainage pipes that ran under the busy road that marked the end of our neighborhood. They were large enough to walk through and I’d been through them many times to the other side, but now they were gaping holes filled with blackness.

I didn’t like the look of the tunnels; anything could be lurking in there, hiding.

“Come on,” Brad said. “You first.” He shoved Sam toward the opening.

Sam looked back and gave me a pleading look. Then he stepped into the murk and was gone.

Brad smiled, didn’t look scared at all and followed.

For a moment, I stood there, peering into darkness. “Guys?” I didn’t want to go into the tunnel. It scared me, but my friends had gone in there. And if I didn’t follow, Brad was going to make fun of me, probably at school, and loudly. I took a deep breath, pushed my fear away, and stepped into the darkness.

My feet splashed in the trickle of cold water that ran down the bottom of the tunnel. I couldn’t see a thing, my arms held out in front of me, in case I ran into something. “Brad?” I called out. “Sam?” I couldn’t hear my friends. There was no answer.

Something rattled along the floor of the tunnel.

A rat, I thought. But it sounded bigger than that.

I froze, hearing a sound like a raspy chuckle, and I smelled something too, musky, like a wet animal. I looked back and the tunnel’s entrance had receded to a tiny circle.

“Stop trying to scare me,” I said, my heart pounding in my chest. “It won’t work.”

I could sense something moving in the dark, something padding toward me. A gust of stale air wafted around me, filled with that greasy, animal smell.

For an instant, I saw a pale face hanging in the dark, belonging not to either of my friends, but much older, sagging, sorrowful. I shrunk back against the side of the concrete tunnel and raised my hands to protect my face. Terror filled me.

A moment later, I heard footsteps receding, splashing lightly, leaving me alone in the dark. I was breathing raggedly.

“Oh, shit,” someone said. “There’s something in here with us!”

I panicked and ran. I could hear my friends running behind me. Brad had been the one to break the silence.

We burst from the dark tunnel into the moonlight. I tripped and caught myself in the sand. Sam was right beside me, shaking and breathing heavily.

Brad began to laugh. He had something in his hands and threw it to the ground. It was a furry lump caked with mud. “Just another stupid Halloween thing,” he said.

“What,” I said, standing, picking the thing up. It was rigid and furry and mushed beneath my fingers. “This is…” I threw it away, revolted. “That’s a dead animal!”

Brad grinned. “No, it’s not.” He grabbed a stick from the ground and skewered the thing and swung it around his head.

Brad laughed and danced in a circle. He lifted the stick, and smashed the thing against a rock. It broke into pieces and something wet and wriggling was left on the rock. A rancid stench, cloyingly sweet filled the air.

“Shit,” Sam said, covering his nose with the sleeve of his shirt.

Brad looked at the mess on the rock. He chuckled nervously, a strange look on his face. “I’m going home,” he said. “See you guys tomorrow.” He dropped the stick and Sam and I watched him run along the creek bed, a moment later making a sharp left, back toward the neighborhood and gone. 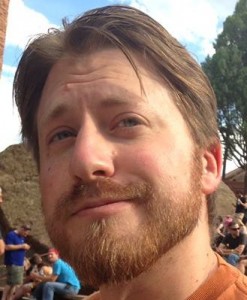 We walked back, neither of us saying a word.

When we reached the top of the small hill that overlooked the creek, I asked Sam if he’d seen anything strange in the tunnel. He shook his head, but something about the look he gave me made me wonder if he was telling the truth.

Movement caught my eye and I watched something moving down in the creek, large, lopping along, with shaggy fur, like a dog, but larger.

A shiver ran through me. I thought about the dark, of the things that lurked within it. “There’s always something out there, isn’t there?” I said to Sam, but my friend had had enough for the night and we both hurried home.

TODAY’S GIVEAWAY: Keith is offering one paperback signed copy of Ghosts of Eden and two e-books of Shadow Animals. Comment below to enter or e-mail membership@horror.org with “HH Entry” in the subject line.

KEITH DEININGER is an award-winning writer of fantastic and disturbing fiction. He is the author of The New Flesh, Shadow Animals, and Ghosts of Eden, among others. He was raised in the American Southwest and currently resides in Albuquerque, New Mexico with his wife and four dogs. He is a skeptic and a bit cynical. www.KeithDeininger.com

Learn more about GHOSTS OF EDEN.

In her bedroom, she dreamed of the cat outside her window, large and white, scratching to be let in, talking to her.

She’d spent the rest of the afternoon avoiding everyone, safely ensconced in her bedroom with the door shut tight. She’d paced and sat and paced some more. The room had seemed tiny, claustrophobic, the walls more closely packed than usual. She’d forgotten her book—it lay somewhere else, in the vastness of the house. She’d watched the storm from her window for a while as it continued to lash and wail outside. She’d tried to read her magazine, but the words were out of focus and distant. She’d pulled her closet open and looked at her clothes hung from hangers and her shelves and her meager collection of toys. A doll in a frilly dress had stared out at her, but its face had been lifeless, she had no longer been able to hear its voice. She’d been trapped in her room, it being the safest place. She wasn’t just restless, she’d realized, she was nervous. But why?

By four o’clock, the storm had subsided to a gentle drizzle. When she’d put the magazine down and held her breath, the house had been very quiet. Bradley must have turned the volume down on his game and her parents had probably been downstairs watching television. She hadn’t been able to watch TV because her parents wouldn’t let her have one in her room, even though they had one and Bradley had one. “You’re too young,” her father had told her many times. “And, besides, you wouldn’t watch it anyway.”

Outside, the light had faded quickly through the darkly bubbling clouds, as evening had struck Kayla’s window and quickly turned to night. She’d expected a call to dinner, but none had come and she would have told her parents not to worry about her—that she wasn’t hungry—anyway. She’d lay on her back on the bed, her head propped up on her pillow, still flipping through the magazine.

You know what’s going to happen, don’t you? the cat said to her.

No. What’s going to happen? Outside it was very dark. She could no longer see the houses across the street—or the street itself, for that matter.

The cat looked at her with round intelligent eyes. You’re going to die.

Oh, yes. Did you really think you could live forever?

I have important things to do.

Then leave me alone.

It’s not up to me, little girl. The cat licked its lips. If only it were…

Outside, the night had changed; it had grown even darker and seemed to be filled with a sudden density of trees, crowding forward: a jungle, a twisting immensity of vines, and Kayla knew, if she were to open her window what would happen. The air would be stiflingly hot and humid. She would be in the jungle. And the cat would come toward her, slowly at first, creeping around the room—large and white and sleek—and then it would pounce, and its teeth would wrap her throat.

You don’t have the strength for the trials. Without help you’ll never make it.

No. Not strong enough.

The sudden sound of shattering glass filled the room. Kayla looked and the jungle was groping through the window.

An uncoiling sound brought her head back around—a dull snick; a convulsion of thumps—and her eyes snapped to the two figures suspended over the floor by the ropes around their necks. They were already dead: faces swollen purple, white jelly running between their lips and eyes and ears.

We never wanted you. We never loved you. It’s better this way.

Don’t do this to me! Kayla screamed. I hate you!

The cat was behind her parents now, creeping toward her.

A vine snaked across the wall like a tentacle, curled about her dresser, disappeared beneath her bed.

I hate you! I’ve always hated you!

It’s alright, dear. Feelings mutual. We hate you too.

The cat looked her in the face from between the shriveled hanging legs of her parents. Enough of this. The cat leapt in the air, its claws extended, pointy teeth bared in a snarl.

The sounds of her own screams woke her.