Letter from the Disney Must Pay Joint Task Force 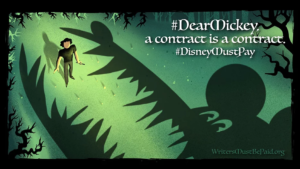 In April 2021, we let you know about a contract issue with Disney that affected multiple authors across different writer organizations. We’ve made some progress and a few authors have been paid. Unfortunately, we’ve also uncovered more concerning issues in the process. We still need your help to raise awareness of the #DisneyMustPay campaign, which has yet to be resolved.

Authors may still be missing royalty statements or checks across a wide range of properties in prose, comics, and graphic novels. As of today, our list is incomplete and only based on properties and/or publishers for which we have verified reports of ongoing issues. We have little doubt more creators are affected by this issue.

We have identified properties now owned by Disney where works are being reprinted by new domestic and foreign publishers without the author receiving notification, updated royalty statements, or payment. Disney acquired two media companies and all their properties. They and their properties include:

Previously published works for these properties are now being reprinted by Disney-owned publishers or their licensees. This list is by no means exhaustive. Publishers include:

If you are an affected author who has not been paid or are missing royalty statements, you have the right to ensure your contract(s) are honored. We urge all creators to review their statements regularly and recommend that affected creators fill out this form, hosted by the Science Fiction and Fantasy Writers of America (SFWA, Inc.). We guarantee anonymity.

Please note that you do not need an agent or membership in any professional organization to seek help from the task force.

Additionally, only a handful of creators have been paid since our last update while several more have come forward.

The Disney Must Pay Joint Task Force has attempted to create a cooperative relationship with Disney, but the corporation continues to refuse a partnership.

Disney’s actions make it clear to us that they are picking and choosing which cases they want to resolve, while simultaneously attempting to isolate creators from receiving counsel from their professional organization. The Disney Must Pay Joint Task Force has observed a marked difference in treatment between agented and unagented creators, as well as high-profile and lesser-known individuals, and novelists and comics writers.

As of today’s date, conversations are ongoing to ensure Dark Horse Comics creators will be paid for their licensed, reprinted comics, graphic novels, and/or novels post-acquisition. Royalties are owed and Disney must pay.

Despite Boom! Studios agreeing to work with us and sending us a list of affected creators, the status of the original cases is unchanged. To date, affected Boom! Studios creators have not been paid the royalties they are owed.

The task force has communicated with Disney in the past, but we have yet to bring these cases to a close. We continue to ask for simple, basic methods to honor contracts. Yet, our experiences have reinforced our belief their strategy is to be selective about who they assist.

Despite paying a few higher-profile authors, Disney is not willing to even put a FAQ on their website, much less work with the task force to identify authors and correct missing payments. Thus, we need your help to alert any creators who may be affected. If you know someone who may be affected, please share this email.

You can also show your support for this effort in a number of ways:

Because Disney has declined to cooperate with the task force in identifying affected authors, the Disney Task Force needs your help to contact everyone who might be affected. Unfortunately, this now extends to reprinted works for the properties listed.

Please help us spread the message widely that #DisneyMustPay.