Halloween often brings to mind memories of past frights and haunts. As a horror writer, I find myself drawn to moments that scared the crap out of me, so I can relive the intense thrill and ponder anew its meaning. I am not talking about actual-horrific events that I experienced in life, but false alarms or watching a horror movie or going to a haunted house. Something frightening without a real threat of violence to myself.

This summer’s publication of The Bachmann Family Secret and the arrival of October has me thinking about one particular recurring nightmare from my high school years. Specifically, during my senior year, I had the same nightmare about four or five times. In the dream, my family and I traveled to my grandfather’s funeral, who had lived in a large ancient home. Side note: he was still alive and didn’t live in a mansion. He lived near us in a tiny apartment at a care facility, but alas dreams don’t always bother with conforming to the truth.

Back to my nightmare: the dream meandered all over the place, but I remember being in my grandfather’s “home” and fearing for my safety. Two moments remain particularly vivid. First, I walked up into the attic to find the ghosts of my grandfather and grandmother dancing together. The image presented a happy, tranquil moment, and nothing in the scene frightened me. I felt happy about their being reunited in death, and they signaled pleasure at seeing me.

But soon thereafter came the second dream incident that terrified me enough to yank me out of my sleep in fear. Something threatened me in the attic – my memory does not recall what. But in the dream I sprint downstairs, through the house, and outside to find my family in our car waiting for me so we could escape. The car peeled out of the driveway, whipped around the corner, and I looked up at the attic window to see: the ghost of my grandfather came flying out the window, glass shattering everywhere, as he dive bombed the front windshield of our car.

Stop! Commercial break! As a writer I should complete this scene because otherwise it leaves you, the reader, hanging with no resolution.

Unfortunately, I am going to do just that to you: stop the story right here. Because at that moment, every time I had the dream, I woke up sweating and afraid. Funny, though, as a horror fan – as much as the nightmare disturbed me, I also embraced the fear. The terror fascinated me. The ability of my mind to scare me even more than a typical horror movie excited me! No wonder, then, that this very dream became the basis for my future novel. Yep – that high school dream of many years ago stayed with me, grew over time, and eventually found its way into The Bachmann Family Secret. In fact, the entire novel was written around these two scenes from my nightmare.

I tweaked and elaborated upon the nightmare over the years, and the story became a lot more fiction than truth once I dove into it. But – spoiler alert – the scene of my grandparents dancing? It’s in the novel. And the fright of a ghost slamming into my family’s car as we attempted to escape? Yeah, that happens in the novel, too. My nightmare came to life. Almost like Freddy Krueger took told of me, the dream scenario captivated my attention over the years so much so that it now resides as a scene in my novel.

So, this Halloween, let yourself embrace a good scary nightmare. You never know where the self-created fright may lead!

The Bachmann Family Secret by Damian Serbu from NineStar Press 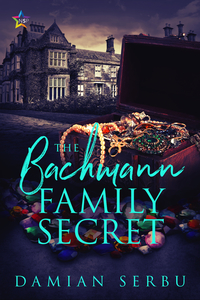 In The Bachmann Family Secret, Jaret Bachmann travels with his family to his beloved grandfather’s funeral with a heavy heart and, more troubling, premonitions of something evil lurking at the Bachmann ancestral home. But no one believes that he sees ghosts, and no one else saw his grandfather’s ghost warning him to stay home except his dog, Darth. Grappling with his sexuality, a ghost that wants him out of the way, and the loss of his grandfather, Jaret must protect his family and come to terms with powers hidden deep within himself.

Damian Serbu is giving away a free copy of The Bachmann Family Secret.  Comment below or send your name in an email to HalloweenHaunts2020@gmail.com by midnight to be entered to win!

Biography: Damian Serbu lives in the Chicago area with his husband and two dogs, Akasha and Chewbacca. The dogs control his life, tell him what to write, and threaten to eat him in the middle of the night if he disobeys. He has published The Vampire’s Angel, The Vampire’s Quest, and The Vampire’s Protégé, as well as Santa’s Kinky Elf, Simon and Santa Is a Vampire with NineStar Press. Keep up to date with him on Facebook, Twitter, or at www.DamianSerbu.com.