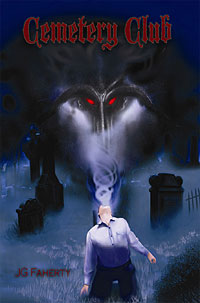 20 years ago, four friends awoke an ancient evil. Now it’s back, and only the Cemetery Club can stop it before the whole town ends up dead. Or worse.

Rocky Point is a small town with a violent history. Mass graves, illegal medical experiments, and brutal murders dating back centuries. Of course, when Cory, Marisol, John, and Todd form the Cemetery Club, they know none of this. They’ve found the coolest place to party after school – an old crypt. But then things start to go bad. People get killed, and the Cemetery Club knows the cause: malevolent creatures that turn people into cannibal zombies. When no one believes them, they descend into the tunnels below the town and somehow manage to stop the killings.

Now it’s twenty years later, and the murders are happening again. The Cemetery Club must reunite to defeat the menace once and for all. Except they can ft remember how they did it.

It’s a race against time as they find the true source of the evil infesting Rocky Point and venture into the tunnels again to face their demons in a final showdown.

With plenty of new twists on some old favorites, Faherty’s latest novel provides readers with as much fun in a graveyard as the law will allow. Ancient legends, demonic shadow-creatures and ravenous zombies–what more could you ask for?” –Hank Schwaeble, Bram Stoker Award-winning author of DAMNABLE and DIABOLICAL.

THE CEMETERY CLUB is like a plastic pumpkin bucket filled to the top with all of your favorite candies. Loads of gory fun! –Jeff Strand, author of PRESSURE and DWELLER.

I’ve known JG Faherty since he was an up-and-comer. Now, he’s arrived. Start reading him now — as in TODAY — so you won’t have to play catch-up later.” –F. Paul Wilson, author of the bestselling Repairman Jack series.