A Series of Bad Advice from Joe Borrelli

Halloween is almost here and, while I don’t know about you guys, I always find it to be a bit stressful. As the resident spooky guy out of my circle of friends, I find there’s always this unspoken expectation: oooh, what are you going to come up with this year! What scary thing are you going to suggest?

Because I’m a social butterfly (or social vampire bat, maybe), I’m always the one who plans scary events throughout the month, which I’ve christened OcJOEber. There’s something going on every weekend and quite a few weeknights, too. Most of these activities are cheap—a necessity as I live in cash-strapped Brooklyn—and they’re a great way to amuse a bunch of drunk hipsters like my friends and myself.

So, without further ado, here are my suggestions for Halloween events you can host in your neighborhood. 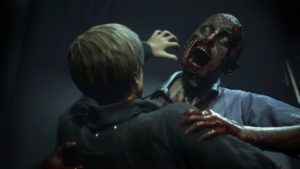 One of my most popular annual events, the Victorian Evening Tea and Séance party is part dress-up event and part scare show. The gist is that I encourage my guests to get dressed up, preferably in period-appropriate costumes, and then I invite them into my home for tea and parlor games. We end the night with either a round on the Ouija Board or a proper séance.

Of all of my events, this one can be the most labor-intensive. I spend a lot of time making finger foods (cucumber and cream cheese or roast beef mini-sandwiches, cupcakes with bats on them, etc.) and in decorating the place for appropriate atmosphere. For this, I recommend enlisting the aid of your guests to help. It lets them feel ownership of the event and takes a lot of the stress off you.

The most costly part of this event is finding nice tea and saucer sets, which can run very expensive if you try to buy them new. I bought all mine from secondhand stores and from a church thrift sale. Nothing cost me more than three dollars, and I had a beautiful, if mismatched set, to serve people.

Lighting is another big part of the décor. I do have a few candelabrum around, but with a bunch of drunks in corsets staggering around, I’m always worried about something getting knocked over. To that end, I replaced the light bulbs in the apartment with color-change bulbs and set them to blue. They contrast nicely with the candle flames and allow people enough illumination to see without spoiling the mood.

Finally, cocktails. Wine is always a favorite, beer is too gauche, but I find that a touch of absinthe really captures the old-world essence I strive for. We had an absinthe set complete with dripping water, sugar cubes, and spoons with little holes in them, but if that’s too much, then a few simple absinthe cocktails will keep your party socially lubricated.

As to the séance itself, there are a lot of ways you can go about it. I had my obligatory Tarot friend (which I’m sure we all have) seated at a corner doing readings, we did a Ouija round in the middle of the event, and we closed out with a séance at the end of the night. Please read my companion article, “How to Summon The Spirits of The Dead For Fun And Parties,” for suggestions on how to pull this off.

This particular game originates (supposedly) in Edo-era Japan and was usually played during summer months, when the wood and paper walls of people’s homes provided little relief from the summer heat. The game was designed to cool the blood, providing guests with a fearful chill to help them beat the temperatures. It was also used as a test of bravery for the samurai warrior caste.

To begin the game, you need two rooms. In the first room, the guests would light a hundred candles. The second room would be empty save for a big mirror. After the hundred candles were lit, guests would take turns telling stories of the supernatural, of dark deeds, or of grisly things that fascinated them. When the storyteller would finish their narrative, they would blow out a candle and then walk alone into the empty room. There, they would stare at themselves in the mirror. After the final candle was blown out, it was said that demons would appear in the mirror.

The use of a hundred candles meant that the game was supposed to take all night, but we all have shit to do, so my version limits the game to 3-5 candles for each player. We prefer using tea lights, but, if burning down your apartment is an issue, then a few candles surrounded by electronic tea lights work as well. Most of the stories are meant to be brief, and I encourage people to share whatever dark lore they’ve come up with, from folklore to true crime tales to stories of medical anomalies and bodily horror.

Ideally, you’d want some kind of fancy ornate mirror for the guests to peer into, but, if you’re budget-scaring like I am, then simply move one of your mirrors to an appropriately spooky location and cover it with black fabric.

Inspired by a Well-Known Horror Video Game Franchise, we created this game for a friend of ours who was lucky enough to be born in October. The gist is that we surprised him by turning our entire apartment into a survival horror game. His friends were the zombies chasing him, and he had to solve a series of small puzzles to beat the Head Monster (his girlfriend dressed as a Witch from Left 4 Dead) and win the game. People loved it, so we had others run through the maze.

This works better if you have access to a larger space. Everyone in our building let us use a floor, so we were able to pull this off in otherwise cramped NYC living. The gist is that the hero has to work through the event, deciphering clues while zombies went after them.

Because we would have lost ALL the security deposits if we actually smeared blood on the walls, we hung up large sheets of butcher paper gleefully decorated in bloody handprints and messages of doom. We replaced the lightbulbs in the halls and bedrooms with trick lights that would flicker irregularly, giving the impression that the power was coming on and off. All the TVs in the house were set to emergency broadcast channels and all the speakers had zombie moans or sounds of emergency vehicles.

As for the actual zombies, we just had our friends darken their eye sockets into shadowy pits, put a little gray foundation on, and have fake blood smeared all over their mouths. Each zombie group was in charge of a specific “zone” in the house, and they could go after the players that wandered within the zone. If one of the players entered a bathroom, the zombies pounded on the doors and moaned a bit before returning to their starting positions. This made the bathroom a place of respite.

We armed the player with a Nerf N-Strike Disruptor, primarily because it was only $10. It was a six-shot gun, but it was difficult to reload and needed to be cocked every time it was fired. We hid extra bullets all around the game space. If a zombie was shot in the chest (we discouraged headshots because eyes are easily poked), then the zombie would go back to their start position, count down from ten, and go back into the game. To attack the player, we attached three red flags to them. If they were grabbed, the player was “dead” and had to restart the maze.

The goal of the game was to escape. Like the original video game franchise it was inspired from, access to different areas required keys to get through. Opening one room would get you the pass key to help get you into a room that was previously closed off, etc. We marked these little clues by electronic tea lights, imitating the twinkle effect of items in the game. The final key accessed the boss fight, which required the player to open the curtain to the room (she was vulnerable to moonlight) and shoot her while she cringed, winning the game.

This game was a lot of fun. We were able to knock it out with 10-12 people (with me as the host), and everyone took a turn. I rearranged the key items before a new player ran through the game simply by moving their positions around the play space. Everyone THINKS they’d be the ultimate survivor, but I saw plenty of people lose their minds when they were surrounded by zombies and running too low on ammunition. 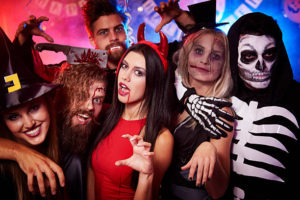 Or, if setting up elaborate sinister party games isn’t your thing, nothing beats a good ol’ fashioned monster movie night.

A monster movie night is a great Halloween party idea. I like to make themed double features (HALLOWEEN and HALLOWEEN 2018), and I break the movies up with vintage spooky cartoons in between each episode.

Two fun additions we’ve done include themed snacks and trivia-for-shots games. Nothing gets people’s appetite up for barbecue like watching THE TEXAS CHAINSAW MASSACRE, and cheesy monster flicks can be more fun after a couple of stiff drinks. 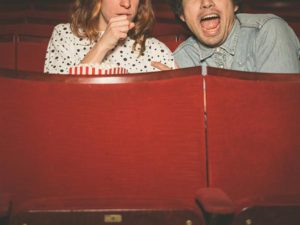 Halloween is a special time of year for all of us horror creators, and there’s no wrong way to celebrate it. I’ve found that creating memorable events has become one of the most satisfying parts of the season. It’s a great way to share the scares with those you love, and an even better way to have the cops called on your house several times in a month.

Stay scary and have a happy OcJOEber!

Joe Borrelli likes writing scary stuff. Find him at CreatureCast.net or at his monthly “Entombed By My Long Boxes” article in this newsletter.