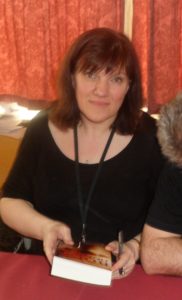 I honestly can’t remember exactly – I first joined maybe ten years ago? My membership lapsed at one point, and I renewed it a couple of years later, but it’s been around ten years overall, I think.

2) How did you serve the HWA and for how long?
I took on running the UK Chapter of the HWA, together with my husband, Paul Kane, in December 2015/January 2016. We’re still doing that – in addition to bringing StokerCon over to the UK for the first time in April of this year (https://stokercon-uk.com). We’re trying to spread the HWA word wherever we can, by sponsoring events, holding regular meet-ups, etc. I also sat on juries for the Stoker Awards a few times – Short Story one year, Anthology the next, Lifetime Achievement the next, and also the Election Committee.

3) Who were/are your biggest influences?
Stephen King is an obvious one; I first read Carrie when I was thirteen and was hooked immediately. Clive Barker, too; I love his prose, his sheer imagination. I also love the writing of Neil Gaiman, Joe Hill, John Connolly, Angela Slatter, and Caitlin R. Kiernan… The list goes on.

4) Was there ever a time you felt being a woman affected your career (for better or for worse)?
Only once, I think, and I’ve worked with so many people over the years. Most of the time I’ve had positive experiences and have been privileged to know and work with some lovely people. The one person who treated me differently because I was a woman isn’t worth mentioning. I’d rather concentrate on the positive, always.

5) Do you feel women’s role in the horror genre could be improved? If so, how?
I think that, traditionally, what made it harder for a woman to be taken seriously in the horror genre wasn’t so much the lack of good female writers (a comment that crops up online now and again), but that women didn’t tend to submit their work. I’ve edited several publications and judged short story competitions etc. for the British Fantasy Society, and I also teach writing, and the numbers of women taking part or putting their work forward was very low compared to their male counterparts. That’s changing, I think, and I’m very glad to see it – but you have to have a thick skin to keep going in publishing, especially as a woman, and traditionally writing horror isn’t seen as ‘nice’, something I know my mum tried to drum into me, and I’m sure I wasn’t alone.

I don’t think that’s such an issue now, but the lack of confidence engendered by seeing an industry as ‘male-dominated’ (even though that’s not necessarily true) is a difficult beast to subdue – and it’s something that will only be cured by seeing more women coming up through the ranks and achieving success, something that’s more likely to happen today, possibly, than it once was.