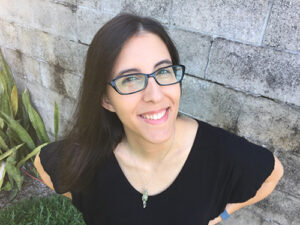 Valerie Valdes lives in an elaborate meme palace with her husband and kids, where she writes, edits and moonlights as a muse. When she isn’t working, she enjoys playing video games and admiring the outdoors from the safety of her living room. Her debut novel Chilling Effect was shortlisted for the 2021 Arthur C. Clarke Award, and was named one of Library Journal’s best SF/fantasy novels of 2019. Valerie is co-editor of Escape Pod, and her short fiction and poetry have been featured in Uncanny Magazine and Nightmare Magazine.

I’ve had the writing tide come in and go out a few times in my life. When I was six and wrote my first story. When I was nine and wrote a whole chapbook of poetry. When my friends and I made a zine in high school. Sometimes I wrote because I wanted to tell a story, sometimes I wanted attention, sometimes I was leaking emotions and writing was my floodgate. I stopped writing over and over, refocusing priorities and devoting my time to other pursuits, but I’ve always picked it back up eventually. Now I do it because I have bills to pay, but also because it’s deeply satisfying to create a world and characters, line up dominoes and then knock them down and watch the pattern emerge.

I’ve been reading horror since I discovered Stephen King in middle school, but I didn’t start writing it until much later. I think comedy and horror are two sides of a coin, and I tend to write both. They’re observational and critical; they see the world and say to everyone else, “Look at this thing! Think about it!” Comedy says, “Isn’t this funny? Isn’t this weird? Doesn’t this make you laugh?” Horror says, “Isn’t this terrible? Isn’t this terrifying? Doesn’t this make you sick?” They both cause similar kinds of discomfort and catharsis, and they mix well because of that. I like to stir the pot.

It’s hard to unravel myself from my work, and that means both conscious and subconscious inclusion happens. Even my stories that take place in other worlds often deal with diaspora feelings, the aftermath of conflict, building a new life far from home, family dynamics, all the scars and splinters from my own life and my family’s history. My Chilling Effect series is specifically about someone descended from Cubans having adventures in space because I think anyone can and should be able to do that, not exclusively but especially in fiction. I once wrote a story for a workshop, a funny horror story about technology gone wrong, and the main character was Cuban, the story took place in Miami, because why not? I was told the character’s ethnicity wasn’t justified. As if any story with a Cuban character must somehow revolve around that identity. How dare we be allowed to simply exist in fiction? Since then, most of my stories are about Latinx people as a quiet middle finger to that person in particular. I hope they got a clue.

I have an overdeveloped sense of justice. The world is a hellscape and it’s easy to feel overwhelmed and powerless. I get angry when people do evil things, and I am filled with harsh and vengeful thoughts. Horror is a good outlet for them, but it’s also a way for me to grab people’s faces and prop their eyes open and make them see something they might have been ignoring. Horror is a dark mirror and a cracked window and some of us are out here polishing the glass.

I think the horror genre has always contained multitudes. You have everything from gore to psychological horror to satire and all shades in between, and I think that isn’t going to change. What I would say we’re seeing more of is horror that deals with the traumas and terrors of historically marginalized people, in a way that isn’t intended to be exploitative or gratuitous. So much old-school horror fixates on fears that often reduce to: what if people with power and privilege were stripped of their advantages or held accountable for their actions? What if people living peaceful, idyllic lives were stripped of their safety and security? Marginalized people often don’t have the same power or privilege or safety or security, so old horror often doesn’t resonate as strongly with those communities as what’s being created now. The dynamics, the fears, the forms of catharsis can be very different, and more and more of these stories are reaching a wider audience and being celebrated. I hope the trend continues.

We’re doing amazing work and that isn’t going to stop. That’s it. That’s the tweet.

I get chills thinking about Captain Vidal from Pan’s Labyrinth. The Pale Man may look scary, but Vidal is the real monster in that movie. The masked child in The Orphanage literally gives me nightmares.

If you’re going to sell your pain, don’t sell it cheap; you deserve better than the world is offering.

Don’t be afraid to experiment. Be flexible. Try new things. Find your themes and tropes and voice and lean into them, but don’t feel like you have to stick with anything if it stops working for you. Find what motivates you—spite, rage, twisted glee—and keep that battery charged. It’s okay to take breaks; writing will always be there for you to come back to. Forgive yourself for not being perfect. Dale, que tú puedes.