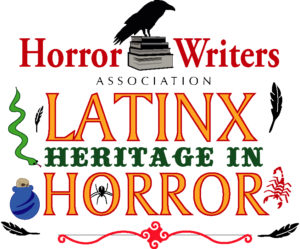 My name is A.P. Thayer and I’m a queer Xicano writer based out of Los Angeles. I write speculative fiction with a heavy horror bent, but try to blend genres as much as possible. My work has appeared in Space Fantasy Magazine, Dark Recesses Press, Uncharted Magazine, Los Suelos, Murder Park After Dark, and Glitter + Ashes, among others. I am also a staff member of Constelación Magazine. My heritage is a big part of not only what I write but my platform. I love talking about it, too!

I jokingly tell people that my need for control is what originally got me started, except as I’ve grown older and more self-aware, that answer becomes less of a joke. When I was younger, being able to create exactly what I wanted to and when was exactly what I needed to survive. Whether it was the rigid structure of school or the tight discipline of my parents, escaping into books and, eventually, writing, was how I got to experience a world outside of the here and now. I especially found myself writing during times when I was struggling with identity and feelings of belonging, so what started as, perhaps, a coping mechanism developed into my true purpose.

I’ve often thought about what it is about horror that I and others are drawn to, and I keep coming back to the idea of controlled fear. We live in a world replete with terror that we can’t shy away from, so experiencing it in measured doses is so appealing. But on a less philosophical level, I’ve always loved scaring people and being scared. The macabre, the horrific, the spooky… from Goosebumps to Scary Stories to Tell in the Dark, my childhood was filled with it. Halloween was always my favorite holiday. My parents unknowingly nurtured the horror lover in me by taking me to gothic cemeteries in Europe. My favorite was the ossuaries. Seeing their creepy architecture in the form of entire chambers filled with bones made me feel like it was okay to love the scary things that I did.

I do. I think representation is huge. I am constantly looking for it when I ingest any form of media, so why wouldn’t I want it to be there when my audience is consuming mine? Whether it’s obvious LatinX characters or influences in my setting, voice, or mythology, I weave it in wherever I can. And I try to do it as widespread as possible because not only do I think representation matters, but diverse and wide representation. LatinX people are not a monolith (just ask a Latin-American what they think of the term LatinX, for example, and you’ll get a dozen different responses), so I want my characters and my work to be widely representative. Regional differences, generational differences, sociopolitical differences. The more rep there is, the wider the rep is, the more likely it will be that someone sees themselves in art who may not have seen themselves as anything but a stereotype before, if anything at all.

The world is filled with horror and it’s easy to feel powerless in the face of it. Even the most horrific things I imagine are not as devastating as some of the real-life issues we are facing right now. Writing horror is like holding onto that one piece of flotsam while the sharks are circling. It’s firm, I can hold it, and it’s the one thing I can focus on while kicking my feet to keep the snapping maws at bay. There are things I can control and things I cannot, and writing horror keeps me just this side of sane.

I think horror has been on the forefront of getting historically underrepresented and marginalized voices a space to exist. The uptick in Latinx horror, especially, has been an absolute balm to my soul. The continued success of authors like V. Castro and Gabino Iglesias has been extremely energizing. I think this is just the beginning, and the horror community will continue to lead by example and push boundaries.

I already mentioned two, but there are so many Latin-American identifying authors putting out fantastic work. I think we’re at the forefront of a golden age of LatinX horror and think the future of LatinX horror is in great hands. I can’t wait to learn more about LatinX history and the community in the work of others.

The first LatinX character I really recognized in horror was Wray in Planet Terror, played by Freddy Rodriguez. For some reason, that character has always stuck with me. Maybe because it was the first character in horror I saw as Latin-American that felt right to me and not just a collection of stereotypes. He was badass, well-spoken, moody… all the things I admired in a character. I love Cheech Marin and everything he’s done for Chicanos, but I don’t talk like that, you know? It goes back to diversity even within the LatinX community.

I think V. Castro and Gabino Iglesias are great places to start, but also be sure to check out Cynthia Pelayo.

There is a ton of prescriptive advice out there that I’ve adopted and then subsequently shed, but the one thing that stuck with me and that is still the most important thing I did for my own writing was this: Find your people. By that I mean, find a group of writers to bounce ideas around with, submit critique to, and to be your support group. Writing is tough and lonely a lot of the time, and I would have floundered so often if I didn’t have my people supporting me. Celebrate everyone’s wins, commiserate about losses, and succeed together.

We are not a monolith, as much as the publishing industry and outsider would like to imagine. Write your story your way. Honor your heritage and your voice in the ways you know how to. Be LatinX your own way.