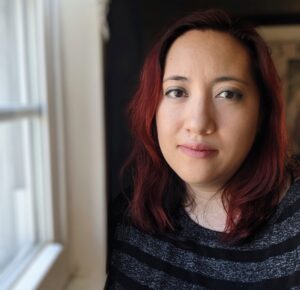 Nadia Bulkin is the author of the short story collection She Said Destroy (Word Horde, 2017). She has been nominated for the Shirley Jackson Award five times. She grew up in Jakarta, Indonesia with her Javanese father and American mother, before relocating to Lincoln, Nebraska. She has two political science degrees and lives in Washington, D.C.

I’ve enjoyed telling stories (as well as absorbing them) since before I could write on my own. What I like now is the same thing I liked at that age: a satisfying plot arc. And what made a plot arc satisfying to me was a sense of consequence and resolution and implication. I do like words, so I’m happy with my chosen medium, but I’m not much of a stylist.

Horror is maybe the most popular style of story-telling in Indonesia, where I spent the first eleven years of my life – instead of cartoons, I used to watch imported Chinese horror movies at 8 a.m. on Saturday mornings. I thought scary stories were exciting and dangerous and the fact that these movies kept me up at night showed me that they had real power.

I do! This is partly about writing “what I know,” and partly about increasing the availability of Asian characters that feel more three-dimensional and less conventional.

I think that my views of the world have more of an impact on my approach to horror-writing than vice versa, and is the reason that my endings tend to be bleak. Maybe the biggest thing I’ve learned from writing horror is that killing monsters does not make a satisfying plot arc, for me.

In the U.S. (where I live), I think more space is being made, slowly, for horror that isn’t grounded in the white male experience (even as a self-critique). And globally, I think more space is being made more quickly for different stylistic expressions of horror. I hope and expect both of these trends to continue, though I doubt the former will be easy. I think it’ll be interesting to see how a horror community that takes pride in being “outsiders” expands to accommodate more POVs.

A lot of horror imagery that’s prevalent today has Asian roots (e.g. the pale ghost woman with long black hair over her face is how onryō were depicted in kabuki plays), thanks to the J-horror/K-horror boom in the ‘00s. But to get depictions of a living Asian community, you have to go to Asia. I would hope that in the future, the Asian diaspora gets representation that goes beyond “superstitious old person” and “disposable airhead.”

I have a soft spot for Alfie in the May the Devil Take You series, because she’s much more of a tomboy and a ne’er-do-well than you typically see for Indonesian heroines. I also really like Lim Ji-oh from the first Whispering Corridors movie, because she’s so defiant and resilient.

Push yourself out of your comfort zone.

Be true to your experience. Write the stories and characters you would have wanted to read. Trust that there is an audience for your work.