A Point of Pride: Interview with Lucy A. Snyder 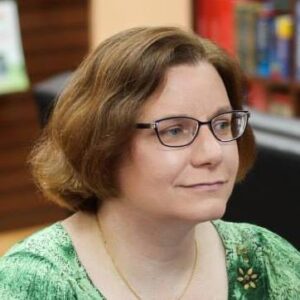 Lucy A. Snyder is the Shirley Jackson Award-nominated and five-time Bram Stoker Award-winning author of 15 books and over 100 published short stories. Her most recent titles are the collections Halloween Season and Exposed Nerves (both from Raw Dog Screaming Press) and the forthcoming apocalyptic horror novel Sister, Maiden, Monster (Tor Nightfire). She lives in Ohio with a jungle of houseplants, a clowder of cats, and an insomnia of housemates.

I wanted to become a writer pretty much from the moment I became an avid reader. And Madeline L’Engle’s A Wrinkle In Time was the book that hooked me as a lifelong reader. I remember that the novel spoke to me in a way that nothing I’d read until then really had, and I got that shivery sense of wonder you get with really good speculative fiction. And I thought to myself that if I could write something that made another person feel the way I was feeling, then that would have to be the best job in the world.

I’ve had nightmares for as long as I can remember. For instance, when I was three or four, I had a recurring nightmare that a large pile of avulsed eyeballs would chase me around the third-story wraparound porch of our house in South Carolina; the doors were locked and I couldn’t get away from it. I wasn’t allowed much TV back then, and my parents certainly hadn’t taken me to see any scary movies, so I’m not sure where all that came from. People said I would grow out them, but I never did.

Even now, my brain is a nightmare factory. I can generally count on having at least one memorable nightmare a week, and the damned things have plots. So writing dark fiction feels most natural to me — I don’t think I actually had much of a choice but to become a horror writer.

Absolutely. I think the vast majority of the stories and novels I’ve written in the past decade have had some kind of LGBTQ content.

I went through my first suicidal depression at the age of twelve. Why was I thinking of killing myself before I’d even become a teenager? I felt completely isolated and unwanted and defective. I was fat. I was a nerd. I was weird in so many ways. And deep down, I knew I was queer. If I’d been just a little more resourceful, a little less fearful, I would not be here right now.

Being queer was the worst. I couldn’t admit it to anyone, not even myself. Back then in that little dust-blown town in Texas, the other kids and adults acted like LGBTQ people were — at best —morally weak crazy people who needed years of shameful psychiatry to straighten out. At worst? They were perverts and predators. Innately evil and not really human. If someone killed a queer, well, that wasn’t what proper law-abiding folks did, but it was still doing the world a favor, wasn’t it?

I escaped into books. I could pretend to be someone else for a while, someone who mattered in their world and had amazing adventures in fabulous places. All those characters I wanted to be were arrow-straight, and mostly male. While I got temporary comfort from these novels, they ultimately reinforced the image I had of myself as being defective because I wasn’t a boy (and therefore wouldn’t ever do anything really cool) and I wasn’t like the other girls, either. Not at all. I was something else, something nobody wanted around. Something that probably didn’t deserve to be alive.

But if I’d seen queer female protagonists in my books? They would have been signs that there might be a future where I belonged and could be happy. I’d have still had plenty of problems as a fat nerdy kid who consistently failed to perform her gender correctly. But I’d have felt I deserved to breathe air.

So, yeah. Putting the characters I needed to see back then into the books I write today matters a great deal to me.

Writing horror has taught me that almost anything can be frightening if you present it in the right way. Not just clowns with sharp teeth or giant spiders or Lovecraftian horrors. You can load tremendous dread into the quietest details: a shadow. A tiny crack in the ceiling. The soft sound of someone breathing. A flower. A gentle touch in an empty room.

But on the flip side, writing horror has also taught me that there are ways to face all the things that terrify us. It’s not easy. Being brave isn’t about not feeling fear: it’s about doing what you need to do for yourself and your loved ones even when your stomach is in knots and your whole body is trembling. Writing through all those terrifying, sleep-destroying things lurking in my dreams has taught me that I, too, can be brave.

Horror has become more diverse, both in terms of the kinds of stories we see out there and in terms of the people publishing them. There’s still a long way to go! But there are far more opportunities for writers to see their work in print than there were when I was a kid. A less ideal consequence of that is that so many people are publishing, it’s hard to keep up with everything new, and as a consequence it’s very easy to miss wonderful novels and stories. On the definite down side, it’s also much harder to make a living writing horror … but every other writer and artist is in the same economic boat.

Every horror trope and every horror plot has been done thousands of times. Bring your own personal, unique perspective to your work … that’s how you’ll stand out. Write the stories only you can write.

If you’re pursuing traditional publishing, you will probably see a whole lot of rejections before you get any acceptances. My first 10 short story sales were a whole lot more difficult than my next 30. Keep trying and don’t give up. Network with other writers to learn about new opportunities … and always remember that sending your work out to editors is also a form of networking. Read widely, read often, and try new things in your writing. Don’t beat yourself up if you don’t write every day — I don’t, for instance — but make sure that you’re meeting the goals you’ve set for yourself.

On that note: set goals for yourself. What do you want to get out of writing? Approach your work deliberately, and re-evaluate your goals and strategies every so often.

As LGBTQ writers, you will encounter both unwitting and deliberate bigotry. Keep doing your thing. Focus on moving ahead. Don’t give the jerks space in your head if you can help it.