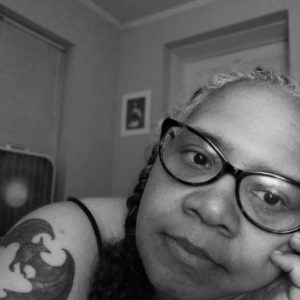 Maafa Day is a Pan-African observance. It is a day of remembrance where we hold space for the millions of Africans who lost their lives due to the TransAtlantic slave trade. That includes those who died on slave ships while being forcibly transferred to the Americas, those who died during escape attempts, and those who died in captivity. Maafa comes from the Kiswahili (Swahili) term for “disaster, terrible occurrence or great tragedy”.and is used to refer to the African Holocaust. Maafa Day also serves the purpose of making sure that we never forget Maafa – the African Holocaust. This year it falls on July 19.

This is an interview of Michelle Renee Lane by Sumiko Saulson on the subject.

Michelle Renee Lane holds an MFA in Writing Popular Fiction from Seton Hill University. She writes dark speculative fiction about identity politics and women of color battling their inner demons while fighting/falling in love with monsters. Her work includes elements of fantasy, horror, romance, and erotica. Her short fiction appears in the anthologies Terror Politico: A Screaming World in Chaos, ,The Monstrous Feminine: Dark Tales of Dangerous Women, The Dystopian States of America, Graveyard Smash, Dead Awake, Midnight & Indigo: Twenty-Two Speculative Stories by Black Women Writers and The One That Got Away, and has been featured on The Wicked Library podcast. Her Bram Stoker Award nominated debut novel, Invisible Chains (2019), is available from Haverhill House Publishing. Her nonfiction can be found at Medium, Speculative Chic, and in the soon to be released Writers Workshop of Horror 2 (October 2021).

Unlike Juneteenth, which is a specifically African American emancipation day, Maafa Day is a Pan-African Diaspora observance, and of a somber nature as it highlights the millions around the globe who were never freed and particularly those who were murdered in captivity. When did you first hear of Maafa Day and how did it impact you?

I only recently learned about Maafa Day, but I’ve been aware of the atrocities of enslavement for quite some time. So, I’m not really sure what to say about how it impacted me. In my research about enslavement and the transatlantic slave trade for my novel, Invisible Chains, I encountered articles by scholars comparing the experiences of enslaved Africans to the Jewish Holocaust. Up to that point I had never thought of it that way, but the idea made perfect sense to me. I think that when many people (mainly white people) think about slavery, they think about it as a finite experience that magically happened around the time of the American Civil War and then it was over. The 1619 Project and other efforts to educate people on the realities of enslavement have made it clear that not only did slavery begin long before the 1800’s, but a lot of African people were tortured — mentally and physically — and murdered during enslavement and holocaust is an appropriate way of talking about the experiences of enslaved people. And, it provides an opportunity to look at that holocaust as a shared experience as part of the healing process that many people within the African diaspora are still going through either consciously or unconsciously.

As a horror writer, how do you feel about horror being used as a vehicle to convey the magnitude of the injustice and terror our ancestors experienced in captivity? What are some stories that you think did it well?

I always feel a little weird talking about my own work, so I’ll talk about some of the fiction that inspired me to write my own supernatural slave narrative. The first book I read that dealt with slavery and the traumatic effects it had on the people who experienced it as a kind of haunting, was Toni Morrison’s Beloved. That book is visceral and there are scenes that will forever be burned into my psyche. I read it in college as part of my literature studies, and it was classified as literary fiction. And, I completely agree with that, but I also think it is in a category all its own: Black Southern Gothic Horror. That book had a major impact on how I thought about slavery and also where Black writers fit in the horror canon.

The second horror novel I read that explored slavery did so in a vampire narrative, Jewelle Gomez’s The Gilda Stories. I am obsessed with vampires. I read about them. I write about them. I will watch almost anything with vampire characters in it. Until I read The Gilda Stories, I rarely saw myself in vampire narratives. And, I didn’t realize that fact bothered me until I picked up Jewelle’s book. It made me reevaluate all the other vampire fiction I’d been reading up to that point. For a very long time, Anne Rice’s>/a> Vampire Chronicles were the benchmark that I used to assign value to other vampire stories, and that changed when it occurred to me that the only slaves in those narratives are essentially props in the background to amplify the atmospheric dread Louis experiences as a plantation owner before he becomes a vampire. Gilda is a former slave who becomes a vampire. In my opinion, that was a much more interesting story.

And then, finally, Octavia E. Butler’s Kindred, which was one of the most wonderful and disturbing books I’ve ever read. The idea of randomly time travelling back to the period of enslavement was absolutely terrifying. Each of these novels, as well as the movie 12 Years a Slave, affirmed for me that slavery is absolutely appropriate as a topic, not just a backdrop, for horror fiction.

Maafa Day specifically calls attention to those who died in captivity, but it also connects to our pain as a people connected with slavery. It is a subject that comes up in a lot of African American works of dark fiction. How has it impacted your work?

My protagonist, Jacqueline, is a young slave who is raped, tortured, preyed upon by humans and monsters, and she is undoubtedly scarred, both physically and psychologically. But these experiences are only part of who she is. Yes, they are catalysts for her growth as a character, but they fuel her to take control of her own life and experiences. She is not only seeking freedom, but also the autonomy to live her life on her own terms. Several of the enslaved characters that Jacqueline is close to die throughout the story, and in most cases, their deaths are related to aspects of their enslavement. Certain reviewers of the novel mentioned that they looked forward to the parts of the story with monsters and supernatural elements to take a break from Jacqueline’s experiences under enslavement, which they believed was the true source of horror in the novel.

And are there any instances in your own work of using African Diaspora folklore, including specifically African American folklore, to convey the story of our people’s great tragedy in the millions who lived and died in captivity.

I didn’t pull from folklore that much when writing INVISIBLE CHAINS, but I did use accounts of actual enslaved people and incorporated the real history into my narrative. I think it’s easy to confuse the real history with folklore that deals with the experiences of enslaved people from the African Diaspora, because some of the real stories exist in our minds because of racist depictions of them in film, advertising, and other media from the past, making them seem unbelievable. But, you know, truth is stranger than fiction.

Can you recommend any authors and books from around the Diaspora that use the horror genre to convey the terrible shared history of so many of us whose ancestors were victims of the Trans-Atlantic Slave Trade?

One book that comes to mind is really dark fantasy with horror elements, The Deep
by Rivers Solomon, Daveed Diggs, William Hutson, Jonathan Snipes, which looks at an underwater society of merpeople who are the descendents of the Africans who chose to drown in the sea instead of becoming enslaved. It’s a powerful book. I highly recommend it.