A Point of Pride: Interview with Robert P. Ottone 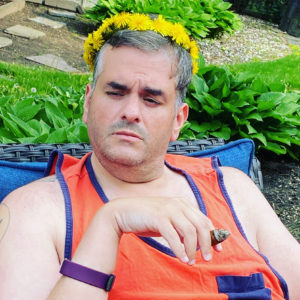 Robert P. Ottone is an author, teacher, and cigar enthusiast from East Islip, NY. He delights in the creepy. He can be found online at SpookyHousePress.com , or on Instagram / Twitter (@RobertOttone). His collections Her Infernal Name & Other Nightmares and People: A Horror Anthology about Love, Loss, Life & Things That Go Bump in the Night are available now wherever books are sold.

Heartache. Writing was one of the few things that has helped me deal with losing my dad two years back. Trying to process and deal with loss and the cocktail of emotions that come with it, that was definitely the catalyst to get me to return to writing fiction.

I feel that horror is such an expansive sandbox to play in. I like to say that reading a well-written family drama is fascinating and certainly draws you in, but imagine that same family drama, just with a haunted house thrown in. That’s even better. Horror allows the writer to indulge in the ugliness of the world while doing so in a therapeutic, relatively safe way.

I do. I do my absolute best to bring LGBTQ voice and character in my writing, along with other groups of people that I believe deserve a seat at the table, narratively. I think, truly, I’m trying to portray the beautiful side of being who one truly is, but also trying to highlight the darkness of the potential reality so many LGBTQ individuals face, day to day.

I have two stories that deal with these two issues head-on, and in my opinion, they’re two of my strongest stories. One is in Unburied, and the other is in The Half That You See, both published by Dark Ink/AM Ink.

The coolest thing I’ve learned about writing horror is how beautiful the community is. I have yet to meet anyone who is outwardly cruel or nasty, whether the writer is a Bram Stoker Award® nominee or winner or whether they’re just someone starting out and exploring their own abilities. It’s a really lovely community and I’m proud to be a part of it.

The horror genre is one of the only ones that evolves constantly. I think we’re riding a wave of some brilliantly-edited anthologies like Black Cranes, Unburied and so many others that will allow folks to get a taste of authors they may have never discovered before. I’m also hoping we see a greater rise in novellas, as so many smaller presses are putting out amazing material like Michael Cisco’s Do You Mind If We Dance With Your Legs?, The Girl in the Video by Michael David Wilson and more.

I feel like I want to steer clear of the obvious ones like Clive Barker’s or Chuck Palahniuk or whatever here, so I’ll throw out a few: Eric LaRocca, whose hustle and drive inspires me, Hailey Piper is definitely another.

My hero is Bret Easton Ellis. Without him, I never would’ve discovered a love for writing when I was a kid. I don’t know if he would identify as LGBTQ, and he’s had controversial opinions on the subject, but he’s an icon to me.

Try not to get bogged down with comparing yourself to others. Everyone gets their time to shine, and hopefully yours is coming.

There’s never been a better time in history to find your tribe among horror writers. Be vocal. Be strong. Get involved. Get your stuff out there however you can. If you can’t sell a story, publish a blog. Do whatever it takes, but make your voice heard, because it matters just as much as anyone else’s.