A Point of Pride: Interview with Jewelle Gomez 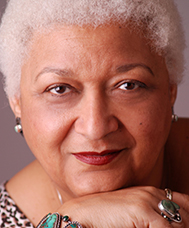 Jewelle Gomez, (Cape Verdean/Wampanoag/Ioway) is a novelist, essayist, poet, and playwright. Her eight books include the first Black Lesbian vampire novel, The Gilda Stories (in print more than 30 years); which was recently optioned by Cheryl Dunye for a TV mini-series. Her work has appeared in numerous anthologies including: Luminescent Threads: Tribute to Octavia Butler, Dark Matter: A Century of Speculative Fiction from the African Diaspora, No Police Know Police, and Red Indian Road West. Her plays about James Baldwin and Alberta Hunter have been produced in San Francisco and New York. Her new collection of poetry, Still Water, will be published in 2022 by Black Lesbian Feminist Press. Find her at www.jewellegomez.com

I grew up with a lot of storytellers-my great grandmother, her daughter, my father. They all told lively stories about their youthful adventures and I was mesmerized. Then coming of age during the Black Arts Movement and the Women’s Movement; in both cases the movements highlighted the value of writing our personal stories as a way of reclaiming our lives as people of colour and as women. Originally I thought I wanted to be a journalist because so much television coverage of the Civil Rights Movement made such a difference to public opinion. But after getting a journalism degree I realised I could use the skills I’d learned to tell the stories of things closer to me–women surviving, lesbians thriving, communities that needed to be seen as human.

When I was writing The Gilda Stories I didn’t think about the genre. I knew it was not just plain fiction but back then I hadn’t realised that vampires were considered horror. And the novel doesn’t have as much explicit, traditional horror as some other novels like Dread Nation. In the years since I’ve come to understand that the ‘horror’ exists in some historical situations like slavery or other things that can be built on and create horrifying narratives. I love the idea of exploring situations that seem ‘normal’ and having the horror emerge from that. For example I wrote a story about a woman having to meet w/her stepfather who’d abused her when she was a child. Then I rewrote it, having a ghost of a dead neighbor be part of the confrontation. That was so satisfying!

Because my life as a lesbian/feminist of colour is my context I don’t have to remind myself to include Queer material. That’s where I begin. There are, of course, other types of characters in my writing but my experience is centralised. I have a Queer social and political circle and they are easily represented in my work. For so long women, lesbians and people of colour were told our stories weren’t important, other (white) people wouldn’t be interested in them. Now we know that was just another way to dominate our experience. I long for the day that non-Queer writers and non-Black writers feel sensitive enough to do the research and include authentic characters in their work who don’t look like them.

In my writing and reading I’ve come to recognise that people perpetuate horrors everyday and either they are hidden or dismissed. We don’t have to look that far to see the stories that need to be told in a ‘grand’ way not simply a journalistic way, so the magnitude of the event/action is not lost in our need to normalise everything. And writing has helped me understand that I have been one of those folks normalising the ‘not normal’! So it’s always a great stretch for me to imagine horror then write it.

The most obvious changes in horror I’ve seen are the increased participation of people of colour and women in the genre. And of course that means that the subject matter and perspectives are different. For example I can’t imagine a non-black writer coming up with Jordan Peele’s “Get Out” yet the story is so elemental to African American experience. The stereotypical subjects that editors always have derided people of colour, women and queer people for I think can become the fresh ideas new writers will incorporate in their work. We have only touched the surface of how those emerging from different cultures will express themselves in horror. I think Tananarive Due opened an important door when she wrote The Good House in 2003. Michelle Lane’s horror/slave novel Invisible Chains and Justina Ireland’s zombie extravaganza Dread Nation are other recent examples of building on the horrors of real history and creating a new horror. Black Leopard Red Wolf by Marlon James is an extraordinary tale and landscape. I imagine many more stories with that deeply ethnic and female core in the future.

We can always go back to the inestimable Oscar Wilde or even Sheridan LeFanu and see that queers stories have been around for a while. Of course Poppy Z Brite has had immense popularity over the years. Still, I feel like it’s in the past decade that queer writers have stepped out into the horror world fully.

I loved the titular character in Carmilla so much I wrote an homage story called “Caramel” with black lesbian characters escaping slavery. And I love Margaret and Serena in Affinity by Sarah Waters. The character, Pie’oh’pah, in Clive Barker’s Imajica is also a fascinating, complex Queer figure I love.

A friend of mine, Stephanie Andrea Allen, just published a wonderful book How to Dispatch a Human: Stories and Suggestions . I really love its horror and its humour. She also edited an anthology Black from the Future, a collection of Black speculative fiction. Wilder Girls by Rory Power is beautifully scary. The Boys on the Mountain by John Inman, since I love a haunted house story.

If I were giving one piece of advice I’d say all of the monsters are right in your own neighbourhood, your own home. One can look at any character or situation and take it to the extreme and have a horror story. Our pasts, both personal and historical, hold so many frightful things one never has to make up monsters.