A Point of Pride: Interview with Billy Martin 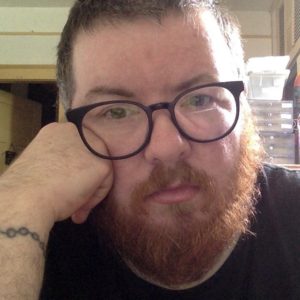 Billy Martin, writing as Poppy Z. Brite, has published several novels and story collections including Lost Souls, Exquisite Corpse, and Liquor. Martin lives in New Orleans with his husband, the artist Grey Cross. He is working on a nonfiction book about religion and spirituality in the fiction of Stephen King. Support him on Patreon at www.patreon.com/docbrite.

I don’t really have a memory of a time when I didn’t do it. Even now, though I’m not currently writing/publishing fiction, I’m still making it up in my head. Most of it isn’t any good, no coherent plot or anything, but it’s always there. When people ask this question, a lot of times they mean “what made you start trying to publish?” I started sending stuff out when I was 12 or 13 because that was about the time I realized I was never going to be fit for anything else. I had the Writer’s Market (for the youngsters, that was a big annual book of magazine and book markets), read the writers’ magazines and everything. Come to think of it, the first market I sold a story to The Horror Show magazine was one I found in Writer’s Digest.

It was the first market I sold to! I hadn’t been consciously seeking out horror markets, but I had always loved reading it, and I realized the label was applicable to most of the work I was doing. I sold several more stories to Dave Silva at The Horror Show, then started getting invited to submit to anthologies — I think Tom Monteleone’s Borderlands was the first one I sold to.

No, not really; I’m just mining what’s there, same as most writers. If I were to resume writing gay-themed fiction, I think one thing I’d want to do is re-address HIV somehow. My husband Grey is not just HIV-positive but an AIDS survivor. I lived through that with him and have had to learn to face the constant fear of losing him. It’s given me a very different perspective from when I wrote Exquisite Corpse. Gender transition has also been an incredible journey that will surely affect anything I write, even if I’m not writing directly about it. I didn’t know I was trans until I was at least in my twenties, but I knew from a very young age that I was … some kind of queer, for lack of a better term. I tried to convince myself I was bisexual, but I really wasn’t, and my relationships with straight and even bisexual men felt all wrong. Not the fault of the men, whom I loved, but (in retrospect) because I needed to be a gay man with another gay man. Writing about male/male relationships helped me a great deal, probably even saved my life.

Well, I guess I had some darkness to plumb, and I plumbed a lot of it, and by the late nineties I didn’t want to write any more horror or (for a while) even read much of it. I wrote some mainstream fiction, I suppose you’d call it, lighthearted stories about restaurants and New Orleans. Then Hurricane Katrina and the failure of the federal levees happened, and I didn’t want to write anything for a long time. Our hearts were collectively broken, and some New Orleans authors were able to respond by writing about it, but I couldn’t. By that time, my publisher didn’t want any more of the restaurant books anyway, and I was sad and disgusted, and I just stopped. Those were terrible years. I feel lucky to have lived through them and made it out the other side, no exaggeration. Anyway, if I were to start writing fiction again, it would probably be horror or at least horror-adjacent.

I think the changes are freaking awesome! A lot of the bigoted old farts have died off, or at least aren’t publishing any more. Gay characters, characters of color, etc. are no longer considered outre or even remarkable. Trans characters are starting to turn up too. I know some guy is reading this and going “It should only be about the stoooooorrryyyyy!!!” It is about the story; more diversity leads to the discovery of more talent, and I think the quality of horror writing — the actual prose — is far higher than it was twenty or thirty years ago. I also see less emphasis on quantity; back in the ’90s, certain writers liked to brag about the size of their “racks.” I mean their vanity shelves, of course, their copies, but I swear I actually heard one guy call it a rack. I understand that it’s hard as hell to make a living as a writer, and sometimes you do have to crank it out fast so you can eat, but I don’t think it should be something to brag about.

(That said, Stephen King is still my favorite writer, so I don’t have anything against being prolific.)

I’m still catching up on contemporary horror, and would want to be better read before talking specifics about representation. For the future, I’d just like to see LGBTQ characters appearing organically in the fiction, as they do in real life. There doesn’t have to be an actual queer horror movement (though that would be cool!). Queer writers should feel free to write about their own communities, and other writers, if they’re going to write about queer characters, should write them as people instead of using them for freak value. It’s already happening, though. All roads lead back to King, but he really is a good example. His early work contained some pretty hostile references to homosexuality. That started changing around the time he wrote IT, I think because of his response to the real gay-bashing murder in Bangor that inspired Adrian Mellon’s murder in the novel. I think he realized, you know, people are being killed for this, and it’s not right. From that point, he started including more gay characters in his work, and while they weren’t always great portrayals, they showed his willingness to grow. In the past few months, he has also spoken out about his disagreement with J.K. Rowling’s anti-trans propaganda.

So anyway, the genre could do worse than to emulate Uncle Steve. As usual.

The characters themselves aren’t especially likeable, but I love Clive Barker’s story, “In The Hills, The Cities.” When he published the Books of Blood, queer protagonists were almost unknown in horror, and this story was revolutionary in part because it wasn’t about the characters being gay; they were just a couple who got caught up in something terrifying and completely outside themselves. I was just starting to publish when the BoB came out, and looking back, the story was very important to me for that reason. I wanted to write horror about gay characters, but I didn’t want the horror to arise from their sexuality. Going back a bit further, Oscar Wilde’s The Picture of Dorian Gray is probably the first gay horror novel, and it’s a hard one to beat — although you could make a pretty good case for Moby-Dick, which really is incredibly gay, and horrific. That final image of Ahab’s corpse lashed to the whale, brrr. Of course, I have a morbid fear of whales, so it might not affect everyone the same way.

Again, I’ve got some catching up to do in the genre. I also hate making lists like this because you always end up leaving somebody out and hurting their feelings. I was going to say that despite the only-about-the-story people, it’s easy to find specific categories like LGBT horror writers, but I did an admittedly cursory search, and no, it really isn’t. There are a hundred lists all citing the same seven or eight authors. The only comprehensive list I found was on queerbio.com , and I’m sorry to say I am unfamiliar with most of the names, but I’ll be seeking them out.

“Write what you love” is such a cliche, but it’s a true one. I was told I wouldn’t be able to publish explicitly gay fiction — I don’t even mean erotica, just fiction whose characters were in obvious same-sex relationships, and here we are. We’ve come a long way even since 1994, when a couple of Hollywood writers pitched me a Drawing Blood screenplay in which Trevor and Zach were just really good friends. (I told them I wasn’t interested; they wrote the thing anyway and sent it to my agent, where it died a merciful death.)