Halloween Haunts: The Voice and Poe

When I think of Halloween, sweet memories come to mind. The scent of caramel apples, the brisk chill of October’s dying breath, horror films flickering on a small screen, and the smooth taste of chocolate on my tongue. These memories are beautiful, but my most favorite is the sound of my dad’s voice reading Edgar Allan Poe.

My father loved Poe. Growing up, he’d read every story, from “The Masque of the Red Death” to “The Gold-Bug.” He also loved the movies, and my first introduction to Poe was through the Roger Corman films starring Vincent Price, Boris Karloff, Peter Lorre, Basil Rathbone, and a young Jack Nicholson.

But my true introduction to the writings of Poe began one Halloween night, when my father read me “The Cask of Amontillado.”

My father entered my bedroom that night with his book, The Unabridged Edgar Allan Poe in hand. The scent of menthol cigarettes wafted in with him as he took a seat in a chair opposite my bunkbed. Then, he crossed his legs, opened the book, and launched into the story, his deep voice filling my room.

My dad possessed a voice like a bass baritone, one he often compared to that of Johnny Cash or Tennessee Ernie Ford. I thought it perfect for a horror story. His rich, gravelly tone possessed just the right touch of malice. The images he wove with Poe’s words concerning the plight of Fortunato and the wrath of Montressor chilled me to the core. I could almost hear the chink of brick hitting brick, the slap of mortar, and the cries of the unfortunate Fortunato.

My father didn’t stop there. When he finished, he turned to the contents, chose another story, and scared me out of my wits with “The Tell-Tale Heart.”

“The Tell-Tale Heart” is frightening and yet, melancholy. The narrator does not hate the old man. He just can’t stand the man’s strange eye and it drives him to murder. The old man does nothing to bring on his sad fate. He can’t help the way he looks. The crime is heart breaking and the narrator deserves what happens when he dismembers the body and buries it beneath the floor.

I hid under the covers during my father’s reading, my own heart pounding, pounding as hard as the old man’s beneath the floor. It was the most terrifying story I’d ever heard.

My dad never read me another Poe story after that. He had a theory that if you repeated an event, the memory wouldn’t stay in your mind as long or seem as special. And, you know, he was right. I have never forgotten that Halloween night. 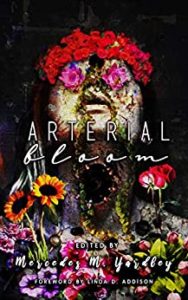 Naching is a member of the Horror Writers Association, an Assistant (and Staff Writer for Still Water Bay) at Crystal Lake Publishing, and Head of Publishing for HorrorAddicts.net. You can find her work on Amazon https://www.amazon.com/Naching-T-Kassa/e/B005ZGHTI0 and on her website https://nachingkassa.wordpress.com.