Halloween Haunts: The Haunter of the Cul de Sac

Oh, Halloweens of my childhood, those halcyon days when our parents hardly ever supervised us and had no idea of the traumas we underwent in the name of fun—most of the time. How it is that I have teeth and am still alive is a mystery to me given all the perilous adventures I took myself on. Yet here I am, remembering not a terrifying Halloween tale of menace most shambling, but the Halloween season when my father shared in the soaring triumph and ultimate defeat of the robot costume he made for me when I was eight years old—and how this is a metaphor for my place among my fellows in the HWA.

My dad and I spent long evenings in our garage in Point Loma, a section of San Diego, California, as he fitted carefully-cut out pieces of cardboard spray-painted silver for my robot legs and robot tennis shoe coverings. Then I stood still and modeled as he created my upper body, consisting of a rectangle of wooden supports covered with Styrofoam and aluminum foil that made me appear about six feet tall. Two heavy straps crisscrossed over my shoulders to bear the weight. My own arms, rendered useless, went inside it. He cut a very small eye-level rectangle in the Styrofoam so that I could see where I was going.

To the towering top of this edifice he attached his fencing mask. This made me about seven feet tall. Next he took cardboard paper towel tubes to fashion a speaking tube for me. There were trial runs, many of them, punctuated by laughter. Eventually, when I said “Trick or Treat” into my speaking tube, I sounded very mysterious and tall.

For my right robot arm, he created a pulley system so that when I pulled on a nylon cord with my eight-year-old hand wedged inside my torso, my right robot arm would activate and lift up my Halloween trick-or-treat bag. This, too, had to be modulated. Too fast, too slow, didn’t work.

“Trick or treat.” Up went my arm. Go for launch!

My best friend, Evie R., scurried across the street as soon as it got dark. She was dressed as a sort of Colonial maiden from clothes she already owned, accented with deeply pink cheeks. We ran out into the night together. Correction: she ran, and I lurched. The robot body was kind of heavy. Getting heavier. Kind of hurting.

No matter! I was the sensation of my little piece of Point Loma. Candy givers yelled for their spouses to come and see! Bring the camera! Who are you? Oh my God, you’re way down there!

Overlooked, embarrassed, she left me after we had hit maybe seven houses. Left me, and I could not see through the theoretical rectangle. I staggered around in the cul-de-sac just around the corner from our house, blisters rising on my shoulders from the tremendous weight of all that wood and the fencing mask; and I didn’t know how to get home; and after a while my father came looking for me, found me, released me from my torture chamber, saw that I had around seven pieces of candy, and apologized profusely.

It took me some time off to realize that my relationship with the HWA, and more specifically, HWA Los Angeles, is a lot like my Robot Halloween. I served HWA as vice president after Lisa Morton filled the giant shoes that Rocky Wood left; I’ve been a member of the board of trustees; I’ve been a Stoker judge. I joined HWA-LA before San Diego established a chapter. I drove to Los Angeles for the LA chapter meetings and participated in LA events such as the Los Angeles Times Festival of Books, signings at Dark Delicacies bookstore, and panel discussions at branches of the LA Public Library.

But after I moved away from Southern California, I withdrew. I assumed I didn’t “really” belong to my chapter any more. I moved to a small town in Washington state that was already filled to the brim with writers, but not horror writers, and I didn’t want to “start over” with them. I was also having problems with a severely damaged knee, and turned down invitations from Seattle-based writers because it was difficult to travel.

Over time, I started withdrawing from sharing what I was up to with anyone, and I even neglected to pay my HWA dues. Then Covid brought us Zoom meetings, and I saw the notices for HWA-LA, but I had already exiled myself because I hadn’t paid up. I didn’t really miss it, I told myself.

And I spent a lot of time on Facebook (and rehabbing my total knee replacement, yay).

Finally I managed to settle up financially, and I emailed John Palisano, not only HWA president but the leader of HWA-LA, and asked if I could come back into the chapter. He welcomed back the Prodigal Robot with his big warm heart, and I started going to the Zoom meetings.

In yesterday’s meeting, I felt that same sense of robot-garage bubbling anticipation while I listened to what my fellow HWA-LAans had been up to since last month’s meeting. Hearing about their short films and their grant proposals and their graphic novels and their specialized interests (Halloween records, Latinx horror comics) enfolded (enshrouded?) me in a sense that neat stuff was going on in our big mutual garage-clubhouse and I was in on the fun.

In his book, Writing from the Inside Out, the writer and therapist Dennis Palumbo debunks the notion that writers by necessity must work in isolation. He suggests instead that creative people are more productive, happier, and focused when they draw strength from a community of people like them. In LA entertainment industry parlance, this is a “table,” a group of like-minded creative people that meets on a regular basis and shares what’s going on with them and with their specialized area of craft. I used to assume screenwriters and TV writers had tables because their forms are by nature collaborative. I didn’t realize until I had been gone for a while that any kind of writer works better in a congenial atmosphere shared with others.

HWA is my big table, and HWA-LA is my home table.

I don’t know I would have put this all together if I hadn’t created a vacuum I eventually realized I needed to fill. In other words, my hiatus from HWA was a good learning lesson. Having missed my compatriots so much, I find I allow myself to be much more open and appreciative of them. My competitive nature is tempered with humility as I realize what a loss I would feel if we weren’t a community. I respect their—no, our—efforts, cheer our successes, commiserate with the group over our individual and collective disappointments. We are an us in the same way that my dad and I were an us during that long ago Halloween Season of the Robot. I know that if I ever got stuck in a cul de sac, one of us would find me and take me home.

And probably give me candy. 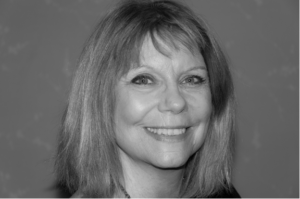 has received 5 Bram Stoker awards for Novel, YA Novel, and Short Story. She is a Baker Street Irregular (“Beryl Garcia”). A new article, “Finding Sherlock Holmes in Weird Fiction,” is available in Penumbra, a new journal of the Weird edited by S.T. Joshi. She is the writer on Mary Shelley Presents, a series of comic book adaptations of short stories by women writers from Mary Shelley up to the 1930’s, published by Kymera Press. The first four issues have been collected into a graphic novel. 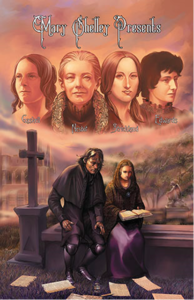 “Written by NYT Bestselling author, Nancy Holder, and published by Kymera Press, Mary Shelley Presents Tales of the Supernatural Paperback, besides having plenty of bonus content, primarily showcases 4 Victorian era horror tales written by female writers brought to life in the comic (graphic novel) format while staying true to the original premises albeit making them scarier, better, and more exciting.”