Halloween has always been my kid’s favorite holiday. I did everything I could to encourage Ezra in that, even letting her choose to stay home from a school sleepaway trip in fifth grade so she could trick-or-treat. What kind of monster schedules a school trip over the best holiday of the year?

By the time Ezra reached junior high, some of her classmates were already outgrowing trick-or-treating, too cool for costumes. Not my kid!

Since she’s an only child, we made dates for her to trick-or-treat with another seventh-grader. My husband Mason and I took them to St. Francis Wood, one of San Francisco’s wealthiest neighborhoods, and let them roam. We lingered nearby, but mostly our attention was taken up by all the families in costumes and the fantastic displays constructed in the neighbors’ yards: cemetery plots, pirate ships with skeleton crews, a full-size hearse drawn by a skeletal horse.

Because there was a lot to take in, my attention was only half on Ezra and Aidan coming back from one of the houses. Ezra’s knees suddenly buckled. Aidan barely caught her. My husband raced toward them before I even thought to move.

Ezra was nauseous, she said, and her head hurt. I asked if she’d eaten too much candy, but she denied it. We got her seated on the curb, head between her knees. Aidan was scared, so I tried to cheer him while my husband helped Ezra as the migraine swept over her.

It was a long miserable walk back uphill to the car, through sidewalks crowded with happy kids. Ezra was too big to carry, so we took the walk in stages, sitting in driveways and leaning against tree trunks. Suffice to say the fun had gone out of the evening.

When the kids were in eighth grade, we made plans to take Aidan trick-or-treating again. Unfortunately, Ezra was too sick with a migraine to go to school on Halloween Day. When we canceled our plans, I worried that we missed our last Halloween of her childhood.

By ninth grade, Ezra needed a wheelchair to get around. The daily migraine meds were so powerful that drug-induced vertigo made it impossible for her to stand. Still, she was determined to trick-or-treat that year. For the first time, she didn’t want chaperones. So Mason and I drove her to a suburban neighborhood down the coast. Her friend Amanda lived at the bottom of a cul-de-sac, a long steep climb upward to the major road. The girls insisted that they could manage the wheelchair up the hill and back down again.

Leaving Ezra to trick-or-treat that night was really hard. I knew my kid was growing up; I understood that she didn’t want me hovering over her. Still, I’d spent weeks sitting beside her hospital bed while the doctors pumped increasingly toxic drugs into her, trying and failing to make the headaches stop. Watching children grow up and letting them go must always be hard, but it feels worse when growing up made her sicker and sicker — and the best the doctors could offer was, “Maybe she’ll grow out of it.”

My husband and I drove home, but I sat beside the phone, waiting for her to call to say it had been too much. That she was nauseous again or her head felt like it was being crushed, that she couldn’t get the puking under control or that she wanted to go back to the hospital for another IV. She never called. In the end, we had to send Amanda’s dad out to locate the girls and make them come inside. I’ve never seen so much candy.

The adventure wore her out and she was too sick to go to school for the rest of the week, but if it was the last time she ever trick-or-treated, it was entirely worth it.

TODAY’S GIVEAWAY: Loren Rhoads is giving away a paperback copy of her collection, Unsafe Words. Email HalloweenHaunts2020@gmail.com with the subject title HH Contest Entry for a change to win. 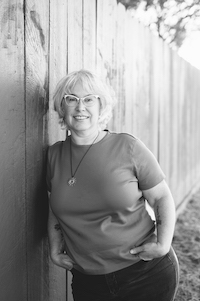 Loren Rhoads is the author of Unsafe Words, a collection of stories previously published in Cemetery Dance, City Slab, Space and Time, and more. Brian Hodge, author of The Immaculate Void and Skidding into Oblivion, called the book “A lyrical kaleidoscope of a collection, whose shifting genres reveal ever-evolving visions of shining beauty and immense darkness.” The book is available in paperback and ebook from Amazon, Barnes & Noble, Indie Bound, and Dark Delicacies. Find more info at https://lorenrhoads.com/writing/unsafe-words/. 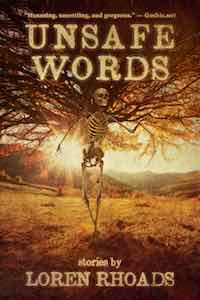 In Unsafe Words, the first full-length collection of her edgy, award-winning short stories, Loren Rhoads punctures the boundaries between horror, dark fantasy, and science fiction in a maelstrom of sex, drugs, and rock-n-roll. Ghosts, succubi, naiads, vampires, the Wild Hunt, and the worst predator in the woods stalk these pages, alongside human monsters who follow their cravings past sanity or sense.