Halloween Haunts: Everybody is a Book of Blood

Each October, we immersive ourselves in narrative. Yes, yes—those classic and cult films, those new and beloved books. I don’t need to tell you. Search “best Halloween movies” and Google spits out 186 listicles before asking you to be more specific. Search “best Halloween books” and you get roughly the same result. But an important aspect of this month gets neglected: narratives come unglued from consumerist machinery to spill out into the rest of life.

We tell each other stories.

One particular house in my neighborhood sticks out: it’s an average bungalow, apart from a large wooden box sat atop a post at the foot of the lawn. The front panel is hinged, with a cheap doorknob nailed to the front. Pinned beside the knob is a sheet of paper, containing no more than three short paragraphs, describing a mad scientist who, unable to find fresh subjects, began experimenting on himself. Pull the doorknob to reveal the doctor’s viciously mutilated (and entirely foam) severed head. A small speaker lets out a canned, gravel-throated scream.

Silly, sure. But following that reveal, the unremarkable house behind the box takes on a new character. I imagine an ad-hoc laboratory packed into the basement, a headless figure shuffling through the refuse. An average home becomes the site of fresh (and incredibly fun) menace.

It’s a micronarrative that encompasses the essence of horror storytelling. Horror at its best is a small push that sets the mind racing. A context is provided to let the shadows evoke something far greater than anything they could possibly contain. This is why we love the genre—its ability to transform the mundane world into something not only stranger and more frightening, but also more magical.

I don’t know if people still tell stories around campfires, but my friends and I will post up at a collapsing mill or 316-year-old murder site, pass a joint and share anecdotes. They’ll tell me about some real weirdness they’ve witnessed: old sconces that light and dim on their own accord; a strange woman’s face briefly flashing in the bathroom mirror once the light switches off; a hulking apparition appearing in a door frame, before gradually dissolving to nothing. None of my friends are writers but they have all these stories, and usually they’re about ghosts.

It doesn’t matter whether these events are genuinely supernatural or hypnagogic hallucinations. These stories nourish me. They feed my work. Because when you’re way too stoned in a dark ruined space, hearing hours’ worth of these stories, you might start seeing ghosts too.

My wife and I celebrate Halloween with my parents. We meet at their house for chili and cornbread before walking the woods behind their house. Ancient pines and rotting birches, coyotes calling from the surrounding mountains—in their natural state, the woods don’t need much embellishment to be suitably eerie. But for the past five years, my mother has turned these walks into a haunted attraction, for just the four of us. The brilliance of these walks is in their minimalism—rather than grandiose set pieces with dummies and animatronics, they’re punctuated by letters pinned to trees. One year these letters were addressed by a Jigsaw-esque puzzle killer threatening to trap us. The year prior, the letters took the form of cruel and taunting nursery rhymes sent by a malevolent living doll (as we walked, I couldn’t help but listen for the crunch of small feet shuffling through the leaves). While my mother is not a professional author, Halloween compels her to tell these stories. And each year, I can rely on a story of hers to transform a familiar location into something fresh: a space of delightful menace.

Horror is a populist genre. That’s one of the reasons it’s so seductive. Professional or amateur, horror wants you to participate. It wants everyone to tell stories. 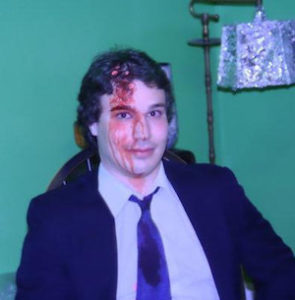 B.R. Yeager reps Western Massachusetts. He is the author of Negative Space (Apocalypse Party), Amygdalatropolis (Schism Press) and Pearl Death (Inside the Castle). He tweets @bryeager.

“Like smoke off a collision between Dennis Cooper’s George Miles Cycle and Beyond the Black Rainbow … a well-aimed shot in the arm for the world of conceptual contemporary horror.”
​​-Blake Butler, author of Three Hundred Million

“… a masterpiece of modern horror. I put it up there with guys like Brian Evenson.”

Read an excerpt from Negative Space by B.R. Yeager: