By David B. Riley

I worked for many years in the hotel business in the mountains of Colorado.  At high altitude snow was a very real possibility for Halloween.  One day, as Halloween was approaching, snow seemed unlikely so I thought Halloween might be good for once. I asked why no one had decorated the lobby of the hotel.  I was shocked when I was informed it was no longer allowed.  The hotel had recently been taken over by another company. Apparently the new owners did not approve of Halloween and there would be no decorations or wearing of costumes or any of that sort of thing.  They did bring in some fall leaves that were glued to a board–hardly the same thing.  Just a few years earlier a stuffed version of the front office manager’s uniform had stood near the door, complete with a jack-o-lantern head.  Now we were reduced to leaves. To say the least, I was not happy about it.

Now, I worked nights at this place–graveyard shift.  Alas, Halloween was not all that exciting a time at a ski resort as the mountain had not opened yet.  At least wearing costumes and decorating the place had been a welcome diversion from the utter boredom that came with what passed for Halloween in Vail. Now they’d taken that from me. I was pissed, but lacked any ideas of how to extract my revenge.  Then it came to me. I knew what I would do.

I came to work early on Halloween.  I went into the linen closet.  I decided a sheet and a pillow case for my head worked best.  I was gonna be a ghost.  So I took my sheet down by the pool. I stood around, but there was no one there.  Finally, the maintenance man showed up to close the pool. I stood near the pool quietly, wearing my sheet.  I started hoping they didn’t think I was some sort of Klansman.  No, I was a ghost.  Surely they could see that. And soon the pool was closed and the maintenance man went back inside. He hadn’t even noticed me.

“David, you are late,” the front desk clerk yelled.

“Who else would stand around wearing a sheet?”

I took the sheet off.  They’d ruined my Halloween.  My effort at revenge had met nothing but failure.  I went into the break room to change into my business attire.  There was a paper plate with some orange cookies. A yellow Post It had my name on it. My favorite holiday had now come to this. I was pathetic.  The orange cookies were damned good–homemade. They really had an orange flavor.

The front doors opened.  A family who’d been staying there a couple of days came in. The older child and the two adults wore regular clothes. The younger one was dressed as a skeleton. I gave him a nod and a thumbs up.

“Yeah, Happy Halloween,” I repeated back to him. In reality I was not happy. Corporate America took my Halloween from me.  I’d actually stood around in a sheet hoping people would think I was a ghost. 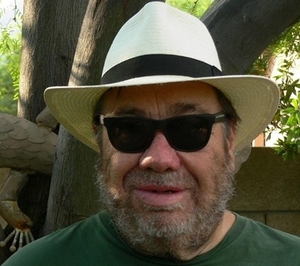 David B. Riley is an active member of HWA.  He’s been writing longer than he cares to admit. Although he’s done a number of different types of projects, he keeps coming back to weird westerns. His recent products as an author in that area are Legends of the Dragon Cowboys and a novella Fallen Angel. He’s also edited seven weird western anthologies.

David’s most recent work is a new weird western anthology that was just released in September. For this project he teamed up with HWA member J. A. Campbell.  The book is called Six Guns Straight From Hell 3.  M. Wayne Miller contributed the cover. Obviously, this is the third book in the series. Copies are available from most retailers or by linking below.

Saddle up for a wild ride through the weird, weird west. As you ride our trails you’ll want to keep one eye on the path ahead and one over your shoulder cause there’s a bushwhacking monster creeping up behind you.  If your horse gets eaten by a monster, you might be able to get a ride on the midnight train, as long as you don’t mind sitting with ghosts.  If you don’t catch the train, maybe the devil can give you a lift back to town. Just be careful which place you head for, because the folks in one town are about to die.  Staying on ranches ain’t much safer, especially at one girl’s birthday party. Then again, even going to outhouses can be deadly. If you happen to visit the local brothel, be sure and treat the ladies right or you’ll pay dearly. And Tombstone is no place to get your picture taken if you want to keep your skin.

David B. Riley is giving away a print copy of Six Guns Straight From Hell 3

To enter the drawing for this giveaway, please send an email by midnight tonight (PST) to HalloweenHaunts2020@gmail.com.