So many of us are stuck inside this Halloween, so we’re excited for this full list of fabulous titles from our Seers’ Table this month. From new anthologies to recognizing a great who left us too soon, browse below for reading to get you through a gloomy October. 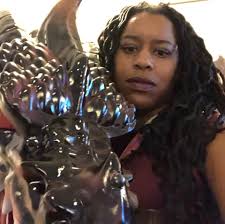 Meet Alledria Hurt, a writer of the macabre from Pennsylvania now enjoying the warmth of sunny Georgia. She is the author of numerous short stories, novellas and novels from the Black perspective. She has three upcoming projects, including a short in the vampire anthology Slay: Stories of the Vampire Noire.

Alledria got bit by the writing bug in eighth grade. Encouragement from a teacher after completing a writing assignment convinced her she DID have talent. This was enough to push her into flexing her writing chops and, despite detours, she has persisted. Starting with her first thriller, Dark Rising, much of Alledria’s work has Black characters, incorporating horror into a world that has been predominantly void of color. In Dark Rising, the protagonist is a Black writer whose horrific stories start to take on a life of their own. Listing this as her favorite project because it blends several different genres, she said the book allowed her to explore a story that, with just a few tweaks to reality, could be hers. However, if you’re looking for a happy ending, you’ve found the wrong writer. Justice is not guaranteed; everyone can get it! When asked, she subscribes to the salt the earth premise: “Burn it all. Scatter the ashes.” Keep that in mind while reading her work.

I discovered Alledria through Slay, a groundbreaking Black Vampire anthology (Nicole Givens Kurtz, editor) out on October 13. Its vampire tales deal with protagonists from Africa or the African Diaspora. Alledria’s story, “Ujima,” follows the happenings of a brand-new vampire and the ties that bind one to family. I was happily surprised to find she had more work for me to explore. Her first short-story collection was Objects: Stories of Things; her story, “The PrizeWinner,” was included in Black Magic Woman (Sumiko Saulson, editor) and “Wish Kitties” was in the Deadly Bargain horror anthology (Mya Lairis, editor).

Alledria Hurt has two other publications coming out soon. Her novel, Alice, is due out October 6. It’s a zombie novel with a twist or two! Coming out on Halloween is The Devil’s Due anthology. “The Black Rock” carries another Black female protagonist. In this case, a writer gets what she wants, just not the way she was planning.

Here is an excerpt of “Wish Kitties”:

As she jogged past, she noticed a beat-up looking van parked in the fire lane of a nearby building. It was the kind of beat-up van one didn’t expect to see anywhere near all the glitz and glitter of the high rises of the area. Yet it looked strangely as if it were a counterpoint to all that steel. There was a man standing beside it with a cigarette and a smile. Angelique couldn’t place him. At first glance, he looked like he might be Haitian, but those eyes said South Islander, and if you looked at his complexion, maybe that was true. Didn’t matter much, she reasoned, knowing the man’s origin wouldn’t get her to the office any faster, and she needed to be moving right along if she wanted to get there before the boss made her life a problem. 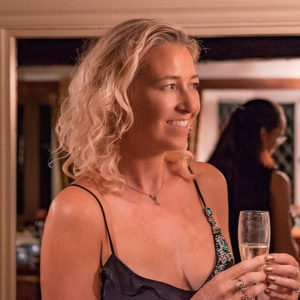 Alice James was born in Staffordshire, where she grew up reading novels and spending a lot of time with sheep. She was lucky enough to have a mother who was addicted to science fiction and a father who was fond of long country walks, so she grew up with her head in the stars and her feet on the ground. After studying maths at university and training to be a Cobol programmer(!), she began writing novels to get the weird people in her head to go somewhere else. She now lives in Oxfordshire with a fine selection of cats, fulfilling her teenage gothic fantasies by moving into a converted chapel with an ancient spiral staircase—and gravestones in the garden. Her go-to comfort dish is a big plate of dumplings, her number one cocktail is a Manhattan, and her favourite polygon is a triangle, though she has a soft spot for concave rhomboids. 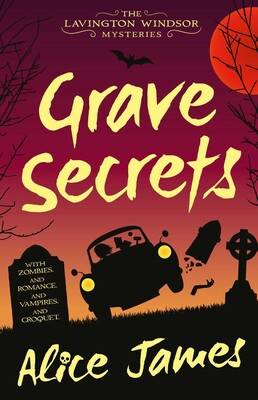 James’ debut novel, Grave Secrets, sees Lavington (Toni) Windsor trying to live a quiet life in the green and pleasant county of Staffordshire. She’d love to finally master the rules of croquet, acquire a decent boyfriend and make some commission as an estate agent …

Lavington’s nightly zombie raising starts, not with an animal to sacrifice like Anita Blake, but with blood, a perfume atomiser, and a packed lunch. After all, zombies tended to be hungry upon awakening.

He stepped out of the earth with a firm stride, nothing tentative about him, and looked around with a watchful air. I could have cheered. He was beautifully intact, not a digit missing, not a mouldering limb in sight. My first thought was how perfect he was for a zombie, and my second  just how tall he must have been amongst my short English ancestors back in the 1750s.”

Alice now has Twitter and can be found here: https://twitter.com/ToniWindsor. 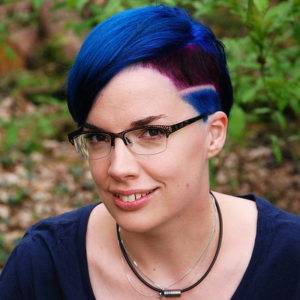 Marieke Nijkamp is a #1 New York Times bestselling author of YA novels, graphic novels, and comics, including This is Where It Ends, Before I Let Go, Even If We Break, and The Oracle Code. Her short stories can be found in several anthologies. She also edited the anthology Unbroken: 13 Stories Starring Disabled Teens.

Marieke is a storyteller, dreamer, globe-trotter, and geek. Before pursuing her lifelong passion for writing, she majored in philosophy and medieval history. She loves to go on adventures, roll dice, and daydream. She lives and writes in Small Town, The Netherlands.

Marieke is the founder of DiversifYA and was a founding sr. VP of We Need Diverse Books. Find her on Twitter.

Marieke Nijcamp‘s Even If We Break: 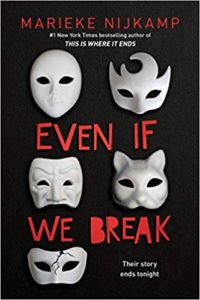 FIVE friends go to a cabin.

FOUR of them are hiding secrets.

THREE years of history bind them.

TWO are doomed from the start.

ONE person wants to end this.

NO ONE IS SAFE.

For five friends, this was supposed to be one last getaway before going their separate ways—a chance to say goodbye to each other, and to the game they’ve been playing for the past three years. But they’re all dealing with their own demons, and they’re all hiding secrets.

Finn doesn’t trust anyone since he was attacked a few months ago. Popular girl Liva saw it happen and did nothing to stop it. Maddy was in an accident that destroyed her sports career. Carter is drowning under the weight of his family’s expectations. Ever wants to keep the game going for as long as they can, at all costs.

When the lines between game and reality start to blend with deadly consequences, it’s a race against time before it’s game over―forever.

Are you ready to play?

Elaine Cuyegkeng was born in Manila, Philippines, where there are many, many creaky old houses with ghosts inside them. She loves eusocial creatures both real and imaginary, ’80s pop stars, and caffeinated drinks with too much sugar. She now lives in Melbourne with her partner and a rose named Blue. She has been published in Lackington’s, The Dark, and Rocket Kapre. She is featured in a new anthology, Black Cranes: Tales of Unquiet Women from Omnium Gatherum. 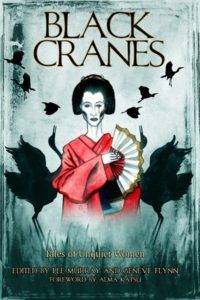 Excerpt from her story, “The Genetic Alchemist’s Daughter”:

She dreams of death and rebirth on her mother’s table. The smell of antiseptic: chemicals, artificial cherries and other-fruit. The specimen on the table. Herself, slipping a needle under the specimen’s skin to obtain samples for reconstruction. Finally, the disposal of the body while the new one grows inside her crimson egg, kicking her little amphibian feet. Later, a telepathic matrix imparts an (edited) library of the Prodigal’s memories. This reinforces the desired traits, knitted carefully into the genome. In twelve days and twelve nights, there will be a single, perfected being: waking in the specimen’s old room with only a vague, uneasy sense of displaced time. There will be no official record, no trace of the original (save for the genetic profiles, buried deep in her mother’s libraries). 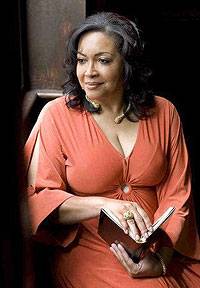 Leslie Ann Peterson Esdaile Banks was born on December 11, 1959. She was a native of West Philadelphia and was a graduate of The University of Pennsylvania Wharton undergraduate program, and an alumna of Temple University’s MFA in filmmaking. At the beginning of her career, she landed a job in corporate marketing for several Fortune 100 firms and worked as an executive for over a decade at Xerox, Hewlett Packard, and Digital Equipment Corporation. Later on, Banks took her marketing skills and became a marketing consultant entrepreneur within the economic development and community-based organization environment.

Banks was an American writer who entered the publishing industry in 1992, where she began a writing career that included 20 novels and eight novellas in diverse genres (romance, women’s fiction crime suspense, and dark fantasy/horror). She also contributed to magazines, newspaper columns, and wrote commercial fiction for five major publishers simultaneously. 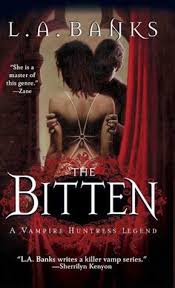 In the genre of dark fantasy/horror, Banks made her mark by writing about vampires, with a six-book series for St. Martin’s Press, including Minion, The Awakening, The Hunted, The Bitten, The Forbidden, and The Damned.

Also for St. Martin’s Press, Banks was signed to an inspired paranormal romance anthology, entitled Stroke of Midnight as a contributor, alongside Sherrilyn Kenyon, Amanda Ashley, and Lori Handeland.

On August 2, 2011, Banks succumbed to adrenal cancer at the age of 51. She left behind a daughter from her first marriage, Helena Esdaile, her husband Al Banks, and her step-children. The literary community mourned the loss of such a talented writer and businesswoman.