Which Witching of Which Witches? by Nancy Kilpatrick 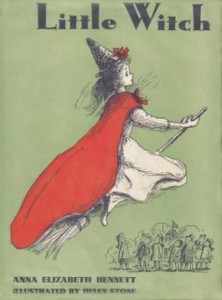 n I was seven years old, I saw a witch. I mean a real witch, not one of the politically-correct Wiccans we have now, or the evil glam witches Hollywood offers up, or the (mainly poor, old, single-by-choice, physically impaired, deranged or feisty) women of history who were burned at the stake because they were outside the collective in some way. No, this was a real witch, not pretty, not pleasant, not a herbalist in a conical hat, and she appeared on Halloween!

Halloween was always a fun time for me as a kid. I remember dressing as a ghost, a vampire (often); a cowgirl (the previous Christmas I’d gotten the cowgirl outfit and a mechanical horse named Toby). The year I saw the witch I went out trick or treating as a witch, with a black cape, pointy hat, green face, and an old broom.

I should also mention that right around this time my class at school made a trip to the big library downtown in Philadelphia. It was an extraordinary experience entering this enormous Classic Revival Style edifice, with its grand staircases, shiny marble floors, exquisite chandeliers overhead illuminating the gorgeous painted ceilings that to my young eyes were 50 feet tall! The furniture consisted of polished oak desks with little lamps and desk chairs, and lovely hardwood card-file cabinets which held white index cards on which were typed the names of books and authors, and number codes that I found incomprehensible. Despite the codes, which were explained in details and which I still could not grasp at all–math has never been my forte–I managed to find a book I wanted to read. Little Witch by Anna Elizabeth Bennett is a children’s novel. Only in my adult life when I felt nostalgic enough to hunt down and purchase an old copy did I discover that literally millions of young girls had read and loved this book, which has a devoted following–the only novel written by Bennett, a Brooklyn librarian who had also penned a book of poetry. Little Witch had remained in print for an astonishing 40 years, from 1953 onward, with a 60th anniversary edition released in 2013.

You can’t judge a book by its cover, yet I did. A young witch, riding a stereotypical witch’s broom. It was the first book I borrowed from a library. That book, that experience, and the library itself burrowed deep into my soul and likely melded with other influences in my early life which led me to become a writer.

So, I was seven. I had this precious book in my temporary possession. It was Halloween and I’d been out trick or treating as a witch and I’d also hosted a party for eleven kids from the neighborhood that afternoon. My Aunt Blanche made the most wonderful ghost out of a sheet and hung it from the ceiling so that it blended into our little group snapshot as child number thirteen.

After a night of trick or treating, and pre-partying as only kids can, I was stuffed with candy my best friend Peggy–who coincidently was also costumed as a witch that year–and I had scoured the neighborhood for, and I felt a little hyper and a little sick. My grandparents, who I was very close to, lived in our house and that night I asked if I could sleep with them–something I hadn’t done in a while, since I’d become a ‘big girl’, but insecurity tugged at me. Their room was on the second floor, at the back of the house. It was a large room with a big bed and two windows that were closed due to Philly’s cold snap. They wouldn’t be upstairs for a while but it was late and I was tired so I crawled into their bed clutching my book, which I’d already read twice. I began rereading the book when suddenly a chill raced up my spine and I was afraid. Instinctively, my head jerked up. Outside the closed window I saw a witch fly by slowly, on a broomstick. She was very close to the window pane and first passed one, then the other window, all the while looking into the bedroom, staring at me. I remember her very well. She was skinny, dressed in a long-sleeved tattered black dress, a cone-shaped hat, scraggly dark hair and black eyes, a large nose with a wart on one side, a pointy chin, and an angry, evil expression on her sharp-angled face as she locked eyes with me.

I may have shrieked; I can’t recall.

Maybe it was the excitement of trick or treating plus the party. Maybe it was an overload of sugar in my system. Maybe it was the influence of Bennett’s marvellous tale of mother and daughter witches at odds. Maybe I was just sleepy. But maybe, just maybe, a real witch flew by my window on the night when that seam between realities splits open and what’s on the other side, the dark side, seeps through.

Of the roughly 225 short stories I’ve published, I’ve written maybe ten witch tales. My latest, “Trick or Treat” (Halloween: Magic, Mystery and the Macabre), talks about a witch trying to overcome her ancestral baggage in a world that treats her badly. My earliest, “Heartbeat” (100 Wicked Little Witches), features a Vodou witch who casts a spell on a man with a heart of stone. None of the witches I’ve written about ride a broom, nor do any spo 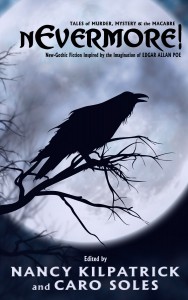 rt a wart anywhere on their face, yet the seven year old me carries that vision of the traditional witch with her to this day.

And just in case anyone assumes that all of the above excuses I’ve offered were meant to justify and make sense of a child’s vision, let me say this about that: even now I am utterly convinced that a witch flew by my window that night, as witches are so prone to do on Halloween!

Nancy Kilpatrick is an award-winning author and editor. She has published 18 novels, over 200 short stories, 7 collections of her stories, and 1 non-fiction book. She is also an editor and her 15th anthology is just out–nEvermore! Tales of Murder, Mystery & the Macabre, Neo-Gothic Fiction Inspired by the Imagination of Edgar Allan Poe (co-edited with Caro Soles). This anthology of 22 original stories and 1 essay is an homage to Poe, the original genre-crosser, and features short fiction by: Margaret Atwood; David Morrell; Kelley Armstrong; Richard Christian Matheson; Tanith Lee; Christopher Rice; Nancy Holder; William F. Nolan; Chelsea Quinn Yarbro; Thomas Roche; Lisa Morton; and many others.