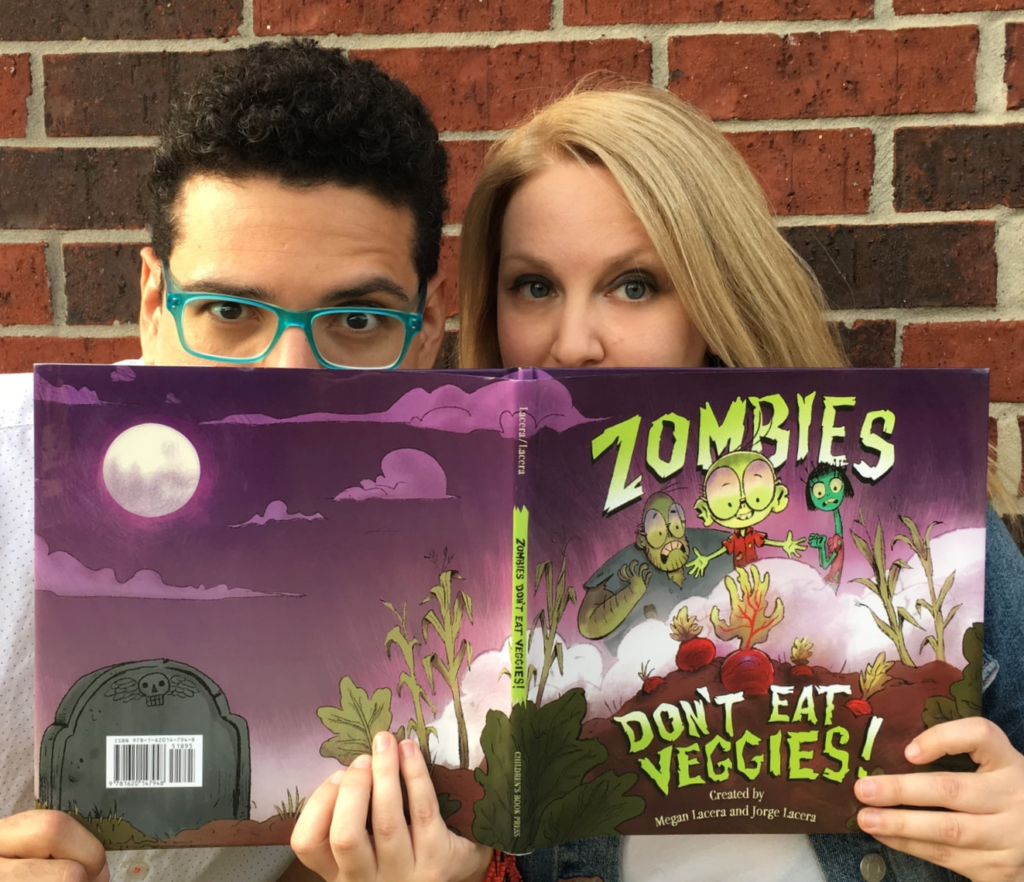 We all know that zombies eat brains. But zombies that eat veggies? Now that’s scary! I recently had the chance to sit down and chat with husband and wife team Megan and Jorge Lacera about their debut picture book, Zombies Don’t Eat Veggies! (Lee & Low, 2019). We also talked about what it’s like writing horror for little kids and why diversity in horror is important.

You don’t see a lot of horror picture books out there for little kids. What made you want to tackle zombies?

Jorge: From the beginning, we knew we wanted to do something that was creepy, and touched on some of the horror tropes. Our son is really into Halloween. We were always looking for experiences and things that we could share with him that had that spooky edge to it. But a lot wasn’t super appropriate for his age range. There’s a lot of parodies of things, and those are fine. But for us, we wanted an original story.

Megan: We both really like horror and pop culture. And, of course, we were into zombies and The Walking Dead. When we started the book, we kept hearing people talk about how their kids wanted to watch the show with them. But The Walking Dead is just way too much for little kids. So we wanted a way for parents to share this zombie obsession with their kids, but in a very light way. And like Jorge said, our kiddo has been into Halloween since the beginning, but he also has a very big heart. So we wanted to create something that fulfilled that scary urge, but had a very heart-centered story as well. 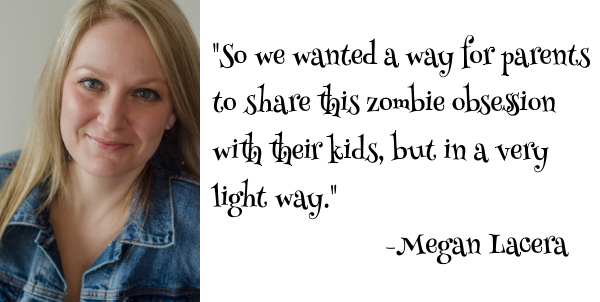 Did you find it challenging to write and illustrate a normally scary subject for a younger audience? How did you tackle that process?

Megan: It was challenging to find that balance. We didn’t want it to be too cutesy, but we also didn’t want to push it too much in the other direction. When we told people we were gonna do a zombie book for kids, there were some that said, “Oh, no. That’s way inappropriate.” So we knew that there was going to be some people that would just never be okay with that. But we found the people that are like us and then we’d show them different versions of the story. We’d ask, “Is this too scary?” That helped.

Jorge: And as far as the illustrations, we knew we wanted Mo to have a distinct character design and be able to stand out. But we also wanted it to be instantly identifiable as a zombie. And I knew I wanted him to be that green and bluish, George Romero, Dawn of the Dead color. It just lends itself so perfectly for a kids’ book. But, at one point, we did need to pull it back. I decided to add this little chunk of brain that was sticking out of his head. But as we were working with our editors, they said, “Maybe we want to just tone back the brain.” And I get it now. We came up with our own rules—anything that felt like it was too specific to the violence, we stepped away from. The characters could be werewolves, they could be vampires, but the story still tracks. They just happened to be zombies and that’s where some of the humor comes from. 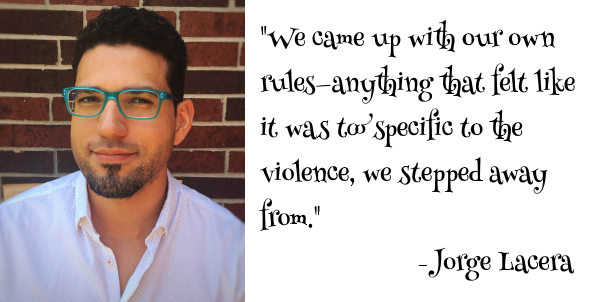 Why do you think kids like reading creepy books?

Jorge: I think it’s a safe way for kids to deal with real fears. As a kid, you want to find a way to deal with it on your own. And I think scary books can help because it lets you edge into it. You’re reading a book, and you can read to a certain page and put it down and be like: “Well, that was really creepy,” and then come back to it and kind of keep edging into it. But I think it’s sort of a cathartic thing to help you get into fears.

Megan: Yeah, and I think it’s probably even more so today. Because there’s so many things  kids have to go through. I think there are scary things that happen in the world, and sometimes it’s a little too much to process for little kids. But something that is creepy but not real helps you work through those feelings in a safer way. It’s almost like exposure therapy.

Why do you think it is important to have diverse books in the horror genre?

Jorge: I was this big comic book and horror and pop culture nerd as a kid. And on Sundays growing up, me and my friends would all sit around and watch Japanese giant monster movies. And it was always really fun. But I was always thought, there’s no one that looks like me, or talks like me, in any of these shows or books or movies or anything. And then I went through college, got a career, married Megan and then we had our son. And there still wasn’t anything. So it became kind of my mission to bring more representation for any other kid that’s into this stuff.

Megan: Our son looks a lot like Jorge and he’s very comfortable with himself. But I think he also notices the lack of characters that look like him. And I think a lot of the diverse books that are out there—they’re very important too—but many are historical books or books about oppression. There aren’t enough books where the characters are diverse, but the story doesn’t hinge on their diversity.

Do you have any favorite creepy books from your childhood?

Jorge: Bunnicula is the one that I loved. And there was another book I would endlessly check out from the library about the cryptid/monsters from all over the US.

Megan: There was this book called Uncle Louie’s Fantastic Sea Voyage about a kid that goes with his uncle on an adventure. And it gets really creepy. I loved the Scary Stories to Tell in the Dark series as well.

Do you have any upcoming projects you’d like to talk about?

Megan: Our deal with Lee & Low is for two books. So we are working on the second book. It’s not about zombies but it is a creepy book. It’s kind of influenced by our love for 80s movies and stuff like that.

Jorge: And then I am illustrating two other books. One book is for Amazon called Pruett and Soo which is about two aliens. And the other is a book for Disney-Hyperion about pen-pal planets called XO, Exoplanet.

You can learn more about the Laceras at http://www.studiolacera.com/ and watch the book trailer for Zombies Don’t Eat Veggies! below:

Rebecca Herzog writes creepy and funny stories for (mostly) young readers. Her poetry has been published in Spaceports & Spidersilk. Rebecca especially enjoys torturing, er, entertaining her own little monsters with spooky bedtime stories. She lives in sunny (and muggy) Florida with her crazy family, a lazy bearded dragon, and two saucy tarantulas. Rebecca’s favorite young horror novel is Something Wicked This Way Comes by Ray Bradbury. Connect with Rebecca on her blog and on Twitter.

One comment on “Q&A for Zombies Don’t Eat Veggies”