One of the oldest surviving works of literature is the Epic of Gilgamesh. It dates back to the 18th Century BCE. For those unfamiliar with the story, here’s a short recap:

Gilgamesh, King of Uruk, is friends with Enkidu, a wild man created by the gods as Gilgamesh’s peer to distract him from oppressing the people of Uruk. Together, they journey to the Cedar Mountain to defeat Humbaba, its monstrous guardian. Later they kill the Bull of Heaven, which the goddess Ishtar sends to punish Gilgamesh for spurning her advances. As a punishment for these actions, the gods sentence Enkidu to death.

Gilgamesh’s distress at Enkidu’s death causes him to undertake a long and perilous journey to discover the secret of eternal life. He eventually learns that “Life, which you look for, you will never find. For when the gods created man, they let death be his share, and life withheld in their own hands.”

Doesn’t really get much darker than that, no? 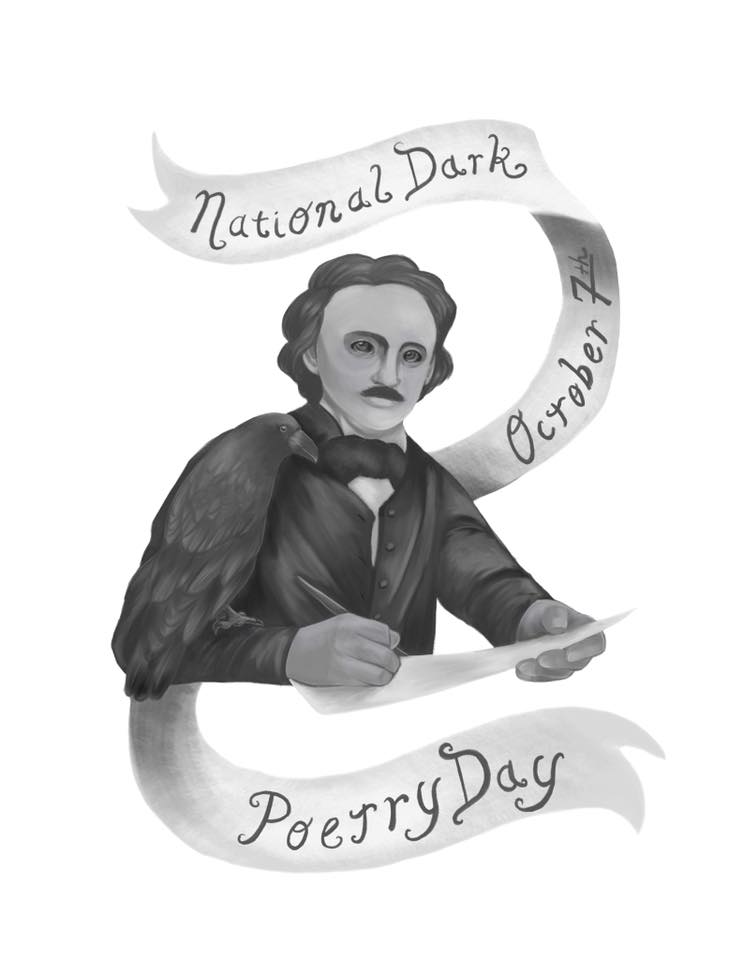 It has been four thousand some odd years since the time of Gilgamesh, but a vibrant, vicious thread of darkness has haunted poetry for every one of those years. And celebrating that thread is the purpose of National Dark Poetry Day.

Modern horror poetry owes a tremendous debt to Edgar Allan Poe’s iconic The Ravenas well as to Gilgamesh’s friendship with Enkidu. As Gilgamesh faces the inescapable fact of his own death, he leaves a haunting legacy to literature. Death is the one constant, throughout history, across the world. In every language there are poems that deal with the end of life, with what lies beyond. And in the search for answers, every poet has discovered different questions to ask about that darkness.

Whether it is the monster under the bed or witches in the attic or any of the myriad shadows imagination can devise, the poetry of horror and the horror of poetry are intertwined. In dark poetry we seek the truth without blinders on, shining light into the darkest corners, ripping off the bandage as quickly as possible.

And in the fear, in the chills, and in the bumps in the night there is the ancient knowledge that the darkest of poetry shines a light on the greatest truth.

National Dark Poetry Day is not just a day for re-reading The Ravenbut a time to discover all those who have followed in the footsteps of Edgar Allan Poe and Gilgamesh.

Bram Stoker winners as well as self-published poets, modern-day stars of the genre and lost, forgotten poets from decades, centuries, and millennia ago. It is a day to celebrate the voices that bring poetry out of the darkness and into the light.

National Dark Poetry Day is the brainchild of HWA Dark Poetry Showcase Founder Peter Adam Salomon. A Bram Stoker nominated novelist, and author of three poetry collections, his work has appeared in numerous anthologies and has been performed by The Radiophonic Workshop on BBC Radio 6.

His short fiction has appeared in the Demonic Visions series among other anthologies, and he was the featured author for Gothic Blue Book III: The Graveyard Edition. He was also selected as one of the Gentlemen of Horror for 2014.

His poem ‘Electricity and Language and Me’ appeared on BBC Radio 6 performed by The Radiophonic Workshop. Eldritch Press published his first collection of poetry, PseudoPsalms: Prophets(nominated for the Elgin Award), and his second and third poetry collections, PseudoPsalms: Saints v. Sinnersand PseudoPsalms: Sodom(nominated for the Elgin Award), were published by Bizarro Pulp Press. In addition, he was the Editor for the first books of poetry released by the Horror Writers Association: Horror Poetry ShowcaseVolumes I and II.