Once I paid for the initial Haunted Mansion Writers Retreat in 2010, I worried what I’d do if the mansion really was haunted. What if things got really bad and I was afraid to sleep? Since I couldn’t drive myself up there, I couldn’t slink out to my car and sleep in it. I’d be trapped for the weekend.

As the retreat drew closer, my new worry became that I’d spent a couple hundred dollars to write for a weekend in a haunted mansion — and nothing would happen. The ghosts would ignore us, or they’d prowl around downstairs while we were all upstairs asleep. How disappointing would that be?

Rain Graves, the weekend’s hostess, hadn’t said much about the ghosts she’d encountered in the mansion. She wanted the attendees to have our own experiences, to form our own opinions. I went into the experience blind, knowing no one but her.

I met S. G. Browne and E. S. Magill in San Francisco for the ride over to Mount Tamalpais. Eunice had come up from Southern California; Scott would drive us across the Golden Gate Bridge. I was relieved to find them your typical very nice horror writers. I felt like I wasn’t making a terrible mistake going away with strangers to a haunted house. I mean, I’ve seen that movie, right? I was determined to be the Final Girl.

We arrived at the Haunted Mansion to find Rain standing on the grand staircase in the foyer. She offered to give us a tour, so we could pick our rooms for the weekend. We dropped our luggage in the first-floor parlor and followed her up the stairs.

The second floor was a maze of interconnecting rooms that encircled the stairway. Almost everyone else had come with a friend with whom they planned to share a room. Since I was solo, I wavered between asking to share a stranger’s room or taking a room of my own. Would the ghosts be more or less likely to mess with me if I slept alone?

There were only eight of us there that first night, rattling around in a house that seemed able to sleep a hundred. Rain said we would all stay on the second floor, even though that was where she’d had the most intense of her ghostly encounters. Most of the second-floor rooms were pass-throughs: each dormitory-style room connecting to the next. I don’t sleep well at the best of times, so I wasn’t eager to choose a room where people might walk through in the night to use the bathroom.

Rain’s tour paused outside a little blue room tucked between a suite — reserved for the one married couple among us — and dead space. I’m not sure what lay on the other side of the wall: maybe a linen closet? It wasn’t another guest room, anyway.

The blue room felt very restful to me, very welcoming. It helped that it only had one door, which faced the bed, and a window that looked out on Mount Tam. The energy felt inviting. When I saw the artwork hanging above the vanity — a piece of white silk featuring a bright Chinese phoenix — I had to have that room. I wear a phoenix tattoo. The room and I shared a kinship.

In fact, my little room proved to be a great haven, especially after I set my suitcase in front of the closet. Not that I thought anything was going to come through there — or that I felt the suitcase provided much of a barricade — but I’ve seen Poltergeist too many times. With big empty spaces, you never know.

I settled into the double bed, feeling safe in a way I wouldn’t have in a room with more doors. I closed my eyes, exhausted and slightly drunk from Rain’s good Argentinean wine.

I thought I heard whispering voices, then a man speaking, but Yvonne Navarro and Weston Ochse had the suite that shared the miniscule balcony outside my window. I put on headphones to block the voices out.

As I lay there in the dark, trying to sleep, the light in my room kept changing. Smudges and smears of light flashed through the well of shadow that lay between the bed and the vanity. The sliver of light coming in around the door grew wider toward morning, as if the door inched open, but it hadn’t. Even so, I didn’t turn my back toward the center of the room.

Finally, about 4:30, I told myself sternly that I really needed to get some sleep. I rolled onto my stomach, clutched the pillow, and felt myself relax. Sleep was washing over me when something the size of a hand compressed the hair on the right side of my head.

Electricity thrilled through me. Without a doubt, someone had touchedme.

I knew I was still alone in the room, but opened my eyes anyway. The room remained silent and empty, holding its breath to see what I would do.

“Hello,” I whispered. “It will be dawn soon. I’d really like to get some sleep before then. Can we talk in the morning?”

I waited, but nothing more happened. Sleep was remarkably easy to find. 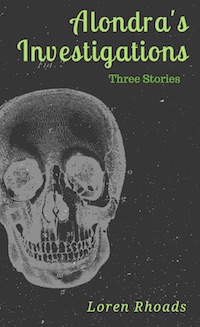 My experiences at the Haunted Mansion Writers Retreat directly inspired “A Curiosity of Shadows,” which appears in the collection Alondra’s Investigations, available now for the Kindle. Here’s a taste of it:

Alondra coiled her fiery braid atop her head and took a chopstick from her backpack to pin it up. No sense in washing her hair now. It would never dry in time for dinner.

She checked the water temperature with her hand, adjusted it, then eased into the stream. The water felt perfect, sluicing over her skin, rinsing the hike away. She closed her eyes to bask.

Something shifted in the bathroom. Alondra remembered the door didn’t lock, but reminded herself that it was a communal room. She resolved to give the other person privacy and turned her back to the shower curtain.

She heard something like a sigh. The curtain blew in toward her, brushing her thigh. Alondra stepped away from its clammy touch, but more of the curtain pressed itself against her. It molded itself to her skin. The intimacy raised goosebumps, despite the warm water pouring down across her shoulders.

“Quit it,” Alondra said firmly. She pulled the curtain away from her body and shut the water off. She reached for the towel hanging on the hook just outside the shower doorway.

Someone put the towel into her hand.

Wrapping it around herself, Alondra said, “Thank you. Would you like in here next?”

She pulled the curtain open. The bathroom was empty. Her backpack still leaned against the door, holding it shut from the inside. The window remained closed. There had been no draft to blow the shower curtain against her.

She’d had her first encounter with the ghost.

BIO:Loren Rhoads is the author of a series of short stories about a young witch who travels the world fighting monsters. This year, Loren’s been assembling the previously-published stories into a collection of chapbooks. Nancy Kilpatrick said about them: “I’ve rarely encountered such beautiful writing. Her newest book weaves mysterious and magical tales that captivate and seduce readers into exotic, lush worlds. Rhoads is a highly-skilled wordsmith and this dark fantasy collection is a must-read.” You can pick up the chapbooks on Amazon at https://amzn.to/2M0fMHi or follow Loren at lorenrhoads.com.

TODAY’S GIVEAWAY:  You can win an e-copy of Alondra’s Experiments by leaving a comment on this blog post or email membership@horror.org with the subject line HH Contest Entry for a change to win. Tell me: have you ever met a ghost?