“The Spirit of Samhain” By David Sharp

Passing through the cemetery gates, I felt a strange calm juxtaposing to the hyperactivity of the city streets. The graveyard surpassed my expectations. It was huge — a vast expanse dating back hundreds of years. Autumn made itself known through a change in the air, a crispness, a different light from the overcast sky. This is the season of the witch, leading up to All Hallow’s Eve — once known as Samhain from the forgotten rites. All of my life I have been drawn to this time of year. The path underfoot was wide and lined with tombs. Leaves were beginning to change in hues of orange and red. 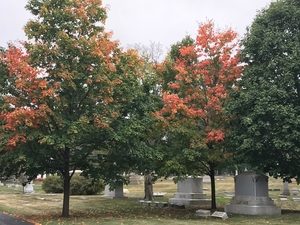 My mind drifted to the past. When I was a teenager, there was a cemetery where me and my punk friends hung out. Located off a freeway behind a seedy motel, it too was vast and filled with acres of the dead. We used to tell ghost stories, freak ourselves out, and enjoy the Gothic coolness in altered states. In present day, I heard a rustling sound that stole me out of my memories. My heart beat faster as I looked around. No one was in sight. Farther down the path, I saw a high brick wall in the distance and wondered about the urban area behind it.

A train passed with a melancholy horn. Nostalgia and mortality plagued my heart in memory of my mother, now in a grave far away. She died from an incurable brain cancer in 2009 and I still miss her. Another memory comes of a Halloween night when I was barely eighteen. Halloween 4 had opened in theaters the week before and I had ordered an authentic and scary Michael Myers mask from the back of a Fangoria, horror film, magazine. I enlisted my friend, Lee, to play a prank. Dressed in a dark blue mechanic’s jumpsuit and the mask, he banged on my mother’s door after dark. I was near, around a corner, and saw the blinds move in time to duck.

“Who’s there?” Mom asked, like a horror film come to life.

“David, is that you?” The blinds moved again. “Stop playing around.”

Passing trick or treaters avoided the porch and went on to the next house. 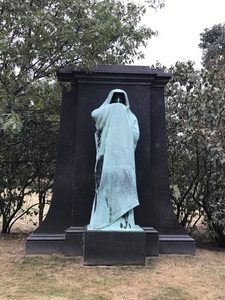 Hearing the terror in her voice caused the hair to stand up on the back of my neck. The moment was awesome.

Lee raised a butcher knife from behind his back.

The blinds snapped back. I went to the door and unlocked it, freaking my mom out more. That was when I realized she had been watching the original Halloween on television by herself when we pulled the prank. Lee and I could not stop laughing. Shaking of the fear, she finally laughed with us too.

The smile left my face with another rustling noise in the cemetery. I stopped.

Was someone watching me?

The wind blew, covering the noise as it crossed the branches above. My heart raced.

Was I going to be attacked by the living or the dead?

I felt alive. The rustling came once more. Turning, I saw something move from one tombstone to the next out of the corner of my eye. I walked back towards the front, trying to remember the way. The rustling was closer the last time. Ready for fight or flight, I look around as a squirrel scampered out of the leaves and climbed up a yellowing tree. Relief washed over me. I had managed to freak myself out, like long ago when I was a kid, in the days before Halloween. 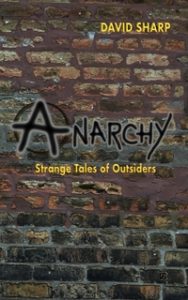 Anarchy – Strange Tales of Outsiders is a punk compendium of queer fiction and horror filled with taboo breaking tales of the streets, asylums, dark rites, and what lies beyond. Experience The Carny Cage, a prison story, with Dirk, whose life is like the carnival ride The Zipper locked up and spinning out of control. Follow Dean on his journey, Where the Road Roams, to find his brother and piece together the past in a fragmented and cut-up tale. Break taboos with a mysterious hitcher in, The Deadfall, as he takes a ride with a van full of coeds into the wilderness where they descend into terror beyond the limits. Witness the Death Tarp. Daniel goes beyond death to return as his shroud, a panel of the AIDS quilt, in a supernatural tale of disease and revenge. Invoke the Dark with a goth youth and his companions as he opens the gates of hell with dark rites. Discover the secret of Under the Moonbow through intense therapy sessions as Maleki, tattooed with the story of his past, schemes to be free of Ponoko Asylum and the covenant with his captor, Dr. West. All of this and more await you inside Anarchy. 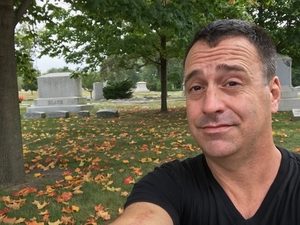 BIO: David Sharp is a writer of creative fiction. A dreamer, he grew up identifying with the outsider from his teenage punk years on. His stories are filled with characters on the fringe of society, from troubled youth and thrill seekers to hardened gunslingers and mysterious loners. Each one is on a journey to find themselves and pursue their desires across exciting and sometimes dangerous landscapes. Escape from Dolphin Street (coming soon) is the third on his own imprint, DS, preceded by Anarchy – Strange Tales of Outsiders and Wild Boys – A Peculiar Western Novel. A Texan by birth, he currently lives in Chicago with his partner Bo.

One comment on ““The Spirit of Samhain” By David Sharp”