Women in Horror Month – Interview with Lucy A. Snyder 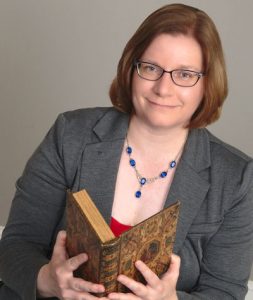 February is Women in Horror Month! The HWA is celebrating by posting interviews with award-winning authors. Following is an interview with Lucy A. Snyder, who has won the Bram Stoker Award five times for works including her fiction collection, While the Black Stars Burn (2015); fiction collection, Soft Apocalypses (2014); non-fiction, Shooting Yourself in the Head for Fun and Profit: A Writer’s Survival Guide (2014); short fiction, “Magdala Amygdala” (2012); and poetry collection, Chimeric Machines (2009).

The books are all very different. The fiction collections, which would seem to be most similar, are composed of stories from various genres written over the course of many years. So, it’s difficult to write concisely about specific influences and inspirations. I can say that everything I write is a combination of the deeply personal and the completely imaginary. I always try to bring my life and my perspectives to the page, because there are only so many plots, so many character types, etc. Anyone who’s widely read has seen the mechanics of any given story before; it’s a writer’s unique voice and perspective that makes a piece of fiction seem fresh.

SL: I was surprised every time! Especially in 2014: it’s unusual to have two works on the ballot and have both win. I hoped they would win, but hoping is not the same thing as having an expectation!

Each award has paid off for each of my winning works in terms of sales and recognition. Winning the award has raised my books’ visibility.

But the win that has paid off most for me was for my story “Magdala Amygdala.” After it won, several editors and podcasters contacted me to see if it was available for reprint or adaptation. It’s been reprinted ten times and translated into Japanese, Czech, and Italian versions. I’m pretty good at reselling stories, but all that far exceeded my expectations.

SL: I do, but these problems are not by any stretch limited to the horror field. While there are sub-genres of horror that employ tropes that are outright misogynistic (using rape as titillation, for instance) as a working professional writer, what I mostly see is an extension of the garden-variety bias you find everywhere. Namely, the perception that women’s work is going to be less vital, less edgy, less interesting than men’s work. And #notallmen, of course; some of my most loyal fans are male readers. But the general trend for a long time has been that female fiction writers are less likely to be published outside of romance, and when they are published, their books are less likely to be reviewed or noticed. Strange Horizons and Vida have gathered statistics on all this.

But a bigger problem for all women artists is being able to preserve their time and energy to get their creative work done. In most communities and families, women are still expected to be the ones who largely take care of the kids, do the cooking, do the cleaning, care for aging parents and sick relatives. Women are still expected to put their husbands’ career aspirations and children’s needs first. The result is that women are often left with less time and energy and support for their writing.

Even just getting ready in the morning — women are expected to sink more time and energy into our appearances, and we are criticized more harshly for looking unkempt or sloppy. I try to be as low-maintenance as I can, but I’m sure I spend a solid half-hour more per day on grooming and dressing than my husband does. That works out to over 180 hours per year! Most women spend a whole lot more time there than I do; I don’t even wear makeup every day. It’s very hard for us to set that time sink aside because we’ll be penalized socially and professionally for it.

More men are pitching in on childcare and household chores than they did in past decades, but the cultural conditioning men and women both receive make it harder for women to preserve the time and energy they need to develop careers as writers and artists. It’s getting better, but there’s still a long way to go.

SL: First, stick with it. Persistence is hugely important. There were some incredibly talented writers in my Clarion Workshop class, but relatively few of us are working professional writers at this point. The difference was being able to grind through all the rejections and disappointments that a writer inevitably faces at the beginning of his or her career. My first ten professional fiction sales were ridiculously difficult; the 90 stories I’ve sold since then have been much smoother processes. Part of that is due to me improving as a writer, but part of it is also due to editors knowing who I am and recognizing that I have an audience.

And on that note, I cannot stress how important networking is. I sold most of my collections to publishers that were technically closed to submissions. The key was that the publishers knew me and my work and were willing to take a chance on my books. An incredible amount of writing business happens at the bar of larger conventions, so that’s a good place to meet other pros. But submitting your stories to magazines and anthologies is also a form of networking, so I encourage writers to not simply default to self-publishing stories. Send them out to professional editors, because that, too, is how they get to know you.