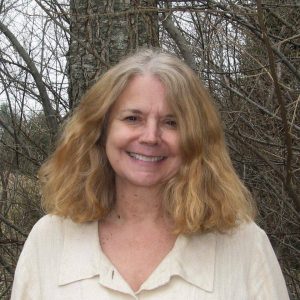 February is Women in Horror Month! The HWA is celebrating by posting interviews with award-winning authors. Following is an interview with Elizabeth Massie, who won the Bram Stoker award in 1990 for her short fiction, “Stephen,” and in 1992 for her first novel, Sineater.

I’ve won the Bram Stoker Award twice, for my first novel Sineater and my novella, “Stephen.” Sineater was inspired, believe it or not, by a made-for-TV movie in which Lindsay Wagner played a nurse who went to Appalachia to help the mountain folks with health care. There was a minor character in the movie who caught my attention. He was the “sineater” – the man who was destined to live alone in the forest and come into the community only when it was time to consume food off the chest of the dead in order to clean the soul for heaven. I thought, The sineater needs a story all his own. And so my novel was born. “Stephen” came straight out of a very bizarre, disturbing dream. As to critical reaction, Sineater was first published in England by Pan, then in American in hardcover by Carroll & Graf, then reissued by Leisure, then Simon & Schuster, then Crossroad Press. So that novel definitely has legs and has been reviewed well throughout its long “career.” “Stephen” has been reprinted in a few anthologies, so it has done well, too. Both the novel and novella have been well-reviewed. I have no complaints!

Both times I won the award were complete surprises; the competition was fierce. Well, in all honesty, each time the Stoker Awards comes around, the competition is fierce. There are some incredible writers in the genre. In fact, the first time I won (with my novella “Stephen”), I was up against Stephen King. Are you kidding me? Stephen freakin’ KING? I didn’t think I had a chance, but I flew out to California from Virginia just to be there for the fun of it. When my name was called I think I spilled my drink on the table, I don’t quite remember! The most concrete way the award has paid off is that it reaffirmed to me that my work didn’t completely suck. I think most creative people – whether writer, artist, actor, dancer, musician – have many doubts throughout their careers. Yet affirmation comes in many ways. Awards are few and far between if ever. So rather than feeling we can do no wrong if we win an award or feeling we are crappy writers if we don’t, we have to put it in perspective and keep on keeping on, honing our craft, being brave enough to get it out there, and encouraging ourselves and others.

I can only speak from my own experience, and I can’t recall facing more difficulties as a female horror writer. Then again, maybe I’m naïve and just haven’t been as aware as I should have been. Maybe I’ve been discriminated against and didn’t realize it. Then again, maybe not. I do know there are some readers who feel men write better, more horrific or powerful horror than women do. But what percent of our readership is that? I don’t know. Would my sales be much greater if I were male? I don’t know. Readers aside, I also have no doubt that some publishers weigh or consider works by men more heavily, and I hate that. In the old days, women would write under a man’s name (the Bronte sisters are a good example of this) or use initials to hide the fact that they were female. I don’t recommend that. I do recommend calling out publishers who clearly discriminate (unless it’s an “all male” antho to match our “all female” anthos; what’s fair is fair, right?) against women writers. I also recommend that we continue to write the best we can and to pound on doors and rattle the walls so we aren’t overlooked.

Read extensively across the genre. AND read extensively outside the genre. Write what you want to write how you want to write it. Don’t write as if your mother is looking over your shoulder; let the stories flow freely. If you need a story to be graphic, go there. And if you want a story to be more subtle and quiet, go there. Don’t feel that you have to write splatter/gore to prove yourself. And don’t feel you can’t write splatter/gore if the story demands it. Meet other writers – both female and male. Attend conventions or conferences if you can. Don’t be arrogant but be bold.

I’m working on a new YA historical horror novel called The House at Wyndham Strand. Set in the late 1800s on an island off South Carolina, it’s way creepy! I’m also working on my Silver Slut series of superhero adventures (several installments are already available on Amazon) and a couple projects for which I can’t say much at the time due to confidentially issues. Cheers!

Elizabeth Massie is a Bram Stoker Award- and Scribe Award-winning author of novels, short fiction, media-tie ins, poetry, and nonfiction. Her novels and short story collections for adults include Sineater, Hell Gate, Desper Hollow, Wire Mesh Mothers, Welcome Back to the Night, Twisted Branch (under the pseudonym Chris Blaine), Homeplace, Naked On the Edge, Afraid, The Fear Report, The Tudors: King Takes Queen, The Tudors: Thy Will Be Done, Dark Shadows: Dreams of the Dark, Versailles, Buffy the Vampire Slayer: Power of Persuasion, and more. She is the author of the Ameri-Scares series of spooky novels for middle grade readers, the Young Founders series of historical fiction for young adults, the comic book The Phantom: Race Against Death, and is co-author of the Great Depression-period musical, Shenandoah Moon. Massie’s newest books, Night Benedictions and On the Outside Looking Up, are of a more spiritual nature. She is currently at work on a new YA historical horror novel, The House at Wyndham Strand, the new Silver Slut series of superhero adventures, a musical entitled The TP Chronicles, and other odds and ends. Massie is a ninth generation Virginian who lives in the Shenandoah Valley with her husband, illustrator and theramin-player Cortney Skinner. She enjoys geocaching, traveling, the beach, chai, fuzzy socks, and the music of Helen Jane Long.