Halloween Haunts: The Last Winter of Newgate by Freedom Chevalier

It crawled toward midnight, outside the Old Bailey

in the echo of Sepulchre’s bells

The moon wrapped himself in a blanket of clouds

the winds screeched a bone-chilling yell

I turned up my collar to stave off the night

a stranger I walked on alone

start to ferry me home

The old road stretched on, bloodless and pale

in the flare of the snickering moon

with gobs of putrid, slick drool

Something blurred the horizon, I unsheathed my sword

with a clink from its talisman chain

A leftover trinket from gods who abandoned

mankind on the night of the rain

“Ezra,” I say in a draught of grey fog

that puffs from my lips as I speak

Ezra, my father, there in the dark

when the dead ones started to seep

from an old rusty sieve

They slipped thru a doorway left slightly ajar

at midnight, on All Hallows Eve

The screams were mistaken for youthful displays

Upon finding a coin in the midst of their sacks

bursting with candy and toys

Dripping and slipping over costumes and paint

That ripped apart souls when they found unmarked skin

immuring the shells of our world

Now, the dead out-number the living

and ere long they each sought their own

Then the feeding began, and those that could, ran

…and those that could not, were gone

as each night more of them sought

Bodies to turn into stumbling abodes

as the haunted are hunted at dusk

A sword and a prayer to gods who don’t care

or themselves have been turned into husks

I turn up my collar to stave off night

a stranger I walk on alone

start to ferry me home 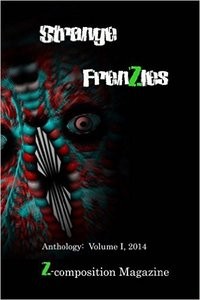 FREEDOM CHEVALIER is an award-winning journalist and author, who has worked continually in various written mediums since retiring from live (stage / music) performance in the mid-nineties. Her work has been published /produced internationally. Additional information can be found on her website: www.FreedomChevalier.com.  On a personal note, she lives with #MarcelTheCat, and her little dog, too, Tallulah…and, yes, she really has heard every possible joke about her name.

TODAY’S GIVEAWAY: Freedom is offering two copies of the anthology Strange Frenzies. Enter for the prize by posting in the comments section. Winners will be chosen at random and notified by e-mail. You may enter once for each giveaway, and all entrants may be considered for other giveaways if they don’t win on the day they post. You may also enter by e-mailing membership@horror.org and putting HH CONTEST ENTRY in the header.

One comment on “Halloween Haunts: The Last Winter of Newgate by Freedom Chevalier”