On May 10, the 2013 Bram Stoker Award for Superior Achievement in a Poetry Collection will be given to one of the following five nominated works. Since April is National Poetry Month and the Horror Writers Association is celebrating with our inaugural Horror Poetry Showcase, I wanted to celebrate the five nominated collections as well, to provide a glimpse into the brilliant world of “horror poetry.”

Superior Achievement in a Poetry Collection

I briefly considered selecting my favorite poem from each piece but decided, instead, to ask each poet (or poets, as the case may be) for their own favorite from each collection. In no particular order, here are their choices.

Dark Rains Here and There
2010

She would listen to the insects ticking
against the dusty metal crosshatch
and watch the light
from a low red sun
encroaching on the shade of the porch.

From the collection Dangerous Dreams, poets Sandy DeLuca and Marge Simon asked me to select my own personal favorite and I chose “Family Ties.” As Dangerous Dreams is illustrated, Marge was kind enough to send along the file of her beautiful drawing that accompanies the poem. 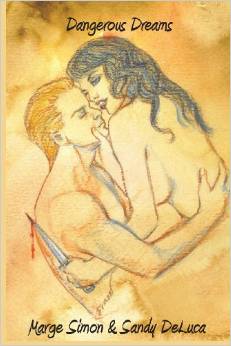 She misses them,
misses those sultry Saturday nights
when they tied her to the bedpost
& laughing, ran their blades
against her throat.

She cries for them,
though her face is scarred,
her mouth deformed,
& her left thumb is history.

She hears her brothers’ voices,
excited about a new pair of pliers,
her parents’ laugh at her door.
Their labors on her last a long time,
and they retire to rest early.

Sleep won’t come, this night.
She tears her tethers from the wall,
seething with anger, her wounds
beyond description, mind on revenge,
and in the shed, she finds the tools.

She buries them upstate
their skulls by the lake,
hands & feet in a farmer’s barn,
tosses their torsos into a culvert
shaded by towering oaks.

Maybe they’ll come back,
tramping through thickets,
across rambling farmlands,
when the red moon rises.

Maybe she’ll be waiting,
hugging her legs under the stars
some sultry Saturday night,
anxious for the special comfort of their
implacable attention. 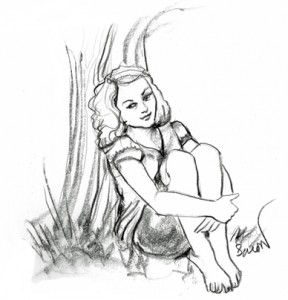 From the collection The Sex Lives of Monsters, Helen Marshall selected “The Collected Postcards of Billy the Kid”

The Sex Lives of Monsters by Helen Marshall

From Helen: “I wrote this poem–one of my very favorites from the collection–on a series of postcards I purchased on a road trip across Arizona with my family. Billy the Kid has always intrigued me, particularly after I read Michael Ondaatje’s stunning The Collected Works of Billy the Kid to which this is a definite homage. Vibrant, lonely, possessing such an immense capacity for violence, my version of Billy is a man haunted by himself, but also in love with himself, a ghost searching out his own imminent death.”

The Collected Postcards of Billy the Kid
2013

1. These are the lost years—
it was easy for Billy to lose himself in them,
tucked away from time
where the earth heaved like a lung,
hills breaking to gravel the rocks,
shattering pines and blasting aspen.

It was the first time Billy saw snow
and so he sank himself into it,
supine, arms spread
and the sun superheating his chest
until he sat up again
saw the angel trace of himself.

The desert never held his presence so long.

2. His path curved like a whip across the wasteland.
He kept Garrett’s man behind him,
losing him sometimes but waiting patient-like
until he saw the black silhouette
pinched like dough in the distance.

When he was lonely,
he imagined walking into that other’s camp
sharing whisky, bread, bacon,
letting that other clean his gun,
tick tick (but companionable!)
before one of them blew the other apart.

This half-dream was the end of his loneliness—
that and the blank of the shadow ten miles away.
He would have made a love letter of it if he could.

3. The earth was a scuttling black:
glassy, black as an upset anthill.

But one evening
as the sky sank into blue gloom,
Billy saw the edge of a dead volcano
light up red as the tip of his cigarillo.

“Oh,”
said Billy,
and it was the first time he had spoken in many days.

It pleased him that when his principles cracked
it was for the beauty:
that bright, burning thing,
the end of all.

4. By then Billy’s beard had begun to grow in,
and when he caught sight
of himself he was angry.

He had been called “the Kid” for so long
he was afraid to leave the name behind.

After that he began to shave—
he had never done anything religiously before
but that was how he did it,

cold edge running across the skin,
catching the blood when he slipped.

He refused to leave any piece of himself behind.

(It was only this last he protested.)

But one night he met a man
named Barringer
who told him of the crater
that hid metal from the sky.

“They’s all want gold,”
the engineer was reported to have said,
before spitting.

Billy went to see,
and when he climbed to the bottom,
Barringer smiled.

“It’s somethin’,” he said,
“what heaven throws down for us.”

Billy imagined these things—
Lucifer’s joyless tumble,
the shape of a body
thrown down so hard,
and the bright bang of the earth
lighting up like a firecracker

(and sometime afterwards
with his father’s gift for clairvoyance)

the click of the bullet
and him mumbling,
“¿Quién es? ¿Quién es?”
three years down that hard road
when Garrett
(that damned angel of mercy)
would lay him low. 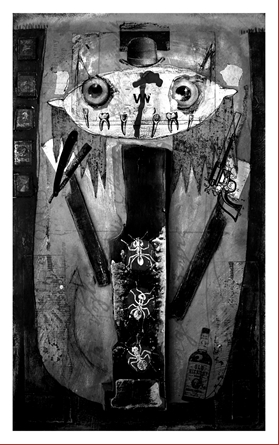 From Linda: “I approached (Marge, Rain and Charlee) with the idea of writing the book and was delighted they said yes and turned in fantastic work. Rain was a main player in our getting our publisher.

In any case, I’m torn between the following two (“Finding the Great Dream of Hell & “Indigenous Evolution”)…although I love them all and see them as a story told from beginning to end, using the Bardo concepts as a framework.

I fell in love with one of the Tibetan meanings of Bardo as “in-between state” when I decided my section would take the reader on a journey through space, time and dimensions after their physical form suddenly changes. I used poetic license to create my own Six Bardo (Continuum, Observation, Transcendence, Death, Revelation, Transmigration) after studying some traditional translations.

One definition of Bardo One=Shinay bardo (Tibetan): is the first bardo of birth and life. This Bardo commences from conception until the last breath, when the mindstream withdraws from the body.”

Finding the Great Dream of Hell
2013

The Underworld sings
from earth that will
no longer embrace me,
abandoned by gravity
exhaling nothing
I still remember soft tissue.

Relentless flames boil water
from earth
entering me,
wanting to cry,
scream, moan
I can only
bend
accept, persist
in the rumbling agony.

Is this a dream,
am I
in
hell? 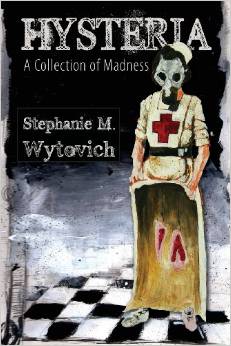 From the collection Hysteria: A Collection of Madness, Stephanie Wytovich selected “Nurse In Ward #1”

From Stephanie: “’Nurse in Ward #1’ embodies the tragic reality of life in the asylum as it portrays madness beyond the patients, beyond the sick and confused. Insanity is a concept, a disease that lurks behind every corner in my madhouse, and sometimes it’s found in the places, and in the people, who you’d least expect.”

I like it when it rains
Because the air
Has a reason to feel cold,
And I’m not constantly
Reminded that there are
People around me
Moments from death,
Practically knocking down
The Reaper’s door
To escape

I like it when it pours
Because the sound
Drowns out their screams,
Helps with the voices
In their heads,
And I can sit back,
Read on my lunch break
Without the moans of
Hungry spirits
Creeping through the
Cracks in my floor

I like it when it storms
Because the lights go out
And I can pretend I don’t
See them fighting,
Don’t hear them begging
As the crazies break out
Of their rooms and murder
Their neighbors while they sleep
I pretend I’m not there,
Because when it showers
I go off duty and
Let the asylum drown