Hallowen Haunts 2013: The Land of the True Halloween by Greg Chapman

I’m an Aussie so what would I know about Halloween, right?

Right now in The Land Down Under it’s spring, going on summer. It’s hot, humid and the constant whir of the pedestal fan or air-conditioner is the only sound you want to hear. Doesn’t sound like Halloween, does it? In your neck of the woods, the true picture of Halloween is emerging. Winter is rising like Death himself from his earthen crypt, pointing his bony finger at the trees, curling the leaves a golden brown. They waltz to the ground below, carried by a chill wind that is steadily growing colder.

This is the Halloween I want, but can only dream of having.

Instead, I must sit here in the heat and try and emulate that “true” Halloween at home. Over the past few weeks, I’ve been preparing to celebrate Halloween with my family, as a family, for the first time. Here, in Australia, Halloween hasn’t really caught on (probably too busy complaining about the heat). There are some who observe the event, but they are few and far between. Still there is a hope. Stores have been stocking costumes and jack o’lanterns and I hope to see a few more kids trick ‘r’ treating, like last year. There’s even an old homestead that will host a Halloween night walk (for the fifth year running) and by God we’re going this time, dressed to the nines. We’ll turn Australia to the dark side if it’s the last thing we do!

The first thing people think when they hear Halloween in Australia (or at least where I live) is “oh, that pagan thing”. They associate it with Satan or something. In truth, it’s meant to be fun. Being scared is part of life – you can’t change that fact – so you might as well make it fun. It’s great to see my daughters’ eyes light up when we talk about Halloween. It’s great to spend time with them and share the “true” Halloween and maybe, just maybe, they’ll pass it on to their children and Halloween will finally catch on in the last English-speaking mainland.

I love that “true” Halloween so much that I decided last year to write a story about it. That book, The Last Night of October, is now on sale from Bad Moon Books. As an Australian, I was very anxious and careful about staying true to Halloween; that air of menace, the evil around the corner, the joy of trick ‘r’ treating. Yes, I set the book in mid-west America (because that is where I imagine the “true Halloween” would call home. I’ve never been to the US, but I painted it inside my head and transcribed it into words. I certainly hope you’ll take a look at the novella and see if I’ve captured the “true Halloween” appropriately. Bad Moon Books and Halloween Queen, Lisa Morton, certainly seem to think I did. 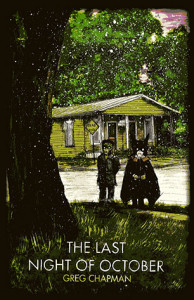 Here’s a scene from the book, where two boys who go trick ‘r’ treating in an approaching blizzard, discover the “true Halloween” for themselves:

Gerald laughed as they ran through the snow towards the intersection of Blake and Washington. Behind him, he could hear Donnie giving chase, his boots crunching the snow, which must have been at least two feet thick on the ground now.

‘Last one’s a rotten egg!’ Gerald teased over his shoulder at Donnie. ‘Or is that…a rotten corpse!’

Gerald saw Washington Street before him; the houses nestled together, inviting yellow light glowing from the windows.

But it was just as Gerald came to the point where Washington merged with Blake Street that he suddenly felt…strange. He came to a stop and stared at his boots. A moment later Donnie appeared at his side, puffing and panting.

‘What’s the matter?’ he asked.

Gerald looked at the road surface beneath his feet, squeezed his eyes shut and then re-opened them.

Donnie looked at the road. ‘Yeah, it’s a road—so what?’

Gerald pointed at it as if his friend couldn’t see it for looking.

Gerald watched as the realisation slowly emerged on his friend’s face; a slight dip in his eyebrows, a quizzical upwards curve at the corner of his mouth.

Gerald held out his gloved hands to the air; not a single snowflake fell on the intersection. Curiosity getting the better of him, he turned on his heels a full 180 degrees to look behind him, back up Blake Street. His gloves slowly filled up with snowflakes. Donnie copied Gerald and gasped.

‘It’s weird,’ Gerald replied, turning back to stand in the centre of the intersection. ‘Don’t you think it’s weird that the snow isn’t falling here on this spot?’

Donnie sniffed and rubbed his nose. ‘Yeah, it’s a little weird, but who cares—come on, let’s go to the Colton’s already.’

Donnie shoved his friend with one hand, while he rubbed his nose again with the other. ‘Don’t be such a baby. It’s probably just the wind or something blowing up the street. He took a step onto Washington. ‘Dammit!’

Donnie stared down at his own gloved hands. ‘My nose!’

Gerald saw the droplets of blood on Donnie’s gloves, watched them soak into the wool. He drew his eyes up and saw a steady drip of blood falling from his friend’s left nostril, almost like a running tap.

‘Oh, no!’ Gerald said, stepping off the kerb onto the road towards Donnie.

The blood dripped onto the sleeve of Donnie’s jacket, down and down to spatter across his boots. Donnie quickly clamped his hands over his nose and squeezed to stem the flow. His brown gloves became red.

‘It won’t stop!’ Donnie cried through his hands. His eyes were wide with panic.

Gerald knew Donnie occasionally had nosebleeds, but never one this bad. ‘Move your hand!’ he told Donnie, reaching up to pry his hands away. ‘Let me have a look!’

Donnie complied, dropping his hands. The blood was running down over his lips.

‘Aw gross!’ Donnie said, before turning to spit a great gob of blood onto the road. It hit the asphalt with an audible slap.

Abruptly the wind stopped howling. There was only the road, yet it was more dirt than asphalt. All the houses had disappeared; there was only the crossroads and the two boys. Gerald and Donnie looked around them. The sky was blue and cloudless. The air was warm, so warm they felt the urge to take off their winter coats.

‘Where are we? ’Gerald said.

Donnie let go of his nose and realised it had stopped bleeding.

‘What’s happening?’ he said to Gerald.

The landscape was lush and green, apart from the dirt crossroads beneath their feet. There were no structures of any kind, only a large oak tree, which cast a looming shadow over the pair. Gerald’s heart hammered against his ribs.

The sound of a branch snapping made them turn. The oak tree was thick, its bark rippled and veined with age. The leaves were turning gold, heralding the rapid approach of Fall.

I hope you liked that and want to read more, but for now I must say “catch ya later!”

So to all you folks living in the Land of the True Halloween I say count yourselves very lucky and spare a thought for this poor, sweaty, Halloween-loving Australian, who sadly has to settle for being there with you in spirit from the other side of the world.

Greg Chapman is a horror author and artist from Australia. He has had four novellas published: Torment, The Noctuary (Damnation Books, 2011), Vaudeville (Dark Prints Press, 2012) and The Last Night of October (Bad Moon Books, 2013). His short fiction has also appeared in Midnight cho magazine, Eclecticism, Trembles, Morpheus Tales, Bete Noire and the anthologies A Killer Among Demons, Sex, Drugs & Horror and Frightmares. His most notable illustrative work is the Bram Stoker Award®-winning graphic novel, Witch-Hunts: A Graphic History of the Burning Times, written by Rocky Wood and Lisa Morton, published by McFarland & Company in 2012. He also illustrates the comic series Allure of the Ancients, written by Mark Farrugia, for Midnight Echo magazine. You can find Greg on the web at htpp://darkscrybe.com

6 comments on “Hallowen Haunts 2013: The Land of the True Halloween by Greg Chapman”