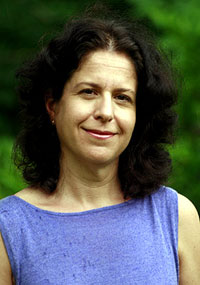 Kaaron Warren is an Australian writer living in Canberra. Before venturing into novel-length work, she published short stories for nearly two decades. Some of her stories were gathered into two collections, The Grinding House (published in the U.S. as The Glass Woman) and Dead Sea Fruit. Kaaron’s first novel, Slights, was published in 2009. This was followed by Walking the Tree in 2010 and Mistification, coming out in June 2011. Her stories have won the ACT (Australian Capital Territory) Writing and Publishing Award, the Ditmar Award (twice), and the Aurealis Award. Slights recently won the Canberra Critics Circle Award.

Hello, Kaaron, and welcome to the HWA.

HWA: Your first novel came out sixteen years after your first short story. Is there any particular reason you waited so long to publish a novel? Do you prefer writing short stories, and if so, why?

KW: I’ve always written both short stories and novels, and I love writing both. With a short story, I can have the idea and realize it, concentrate all the words into expressing that idea in the form of a story.

With a novel, you can’t be as straightforward. You have to explore more, answer more. You can follow different pathways and see where they lead, and you have more room to play with subplots and secondary themes.

Most of my early opportunities came in short-story venues, so those are the ones I pursued.

HWA: Is Slights the first novel you wrote, or had you written, but not published, any novels previously?

KW: I wrote a novel called Skin Deep when I was fourteen. It was pretty powerful, inspired by S.E Hinton’s The Outsiders. I loved writing it, did the whole thing in red pen in a series of exercise books. That was when I knew I could be a writer, not that I just wanted to be one.

Mistification is the novel I wrote next. That’ll be published in June. This one I wrote and rewrote probably a dozen times before Marc Gascoigne at Angry Robot saw it and bought it.

So Slights was the third novel I wrote.

HWA: The room in Slights is something completely off the wall, not at all what most people would imagine when picturing the afterlife. Where did that come from?

KW: I had to go look this word up because I can never remember it, but it describes the exact state I was in when I imagined the room: hypnagogia, the unique state of consciousness between wakefulness and sleep.

A lot of story ideas come to me in this way. The thoughts are there, and the research, but it’s the hypnagogic state where they become clear.

With the room, I knew I wanted to explore the idea that we all create our own personal hell. (An aside: I was interviewed by a newspaper once and they misunderstood me, thinking I said, “Our own personal hill”!)

I wasn’t sure what my character’s hell would be; I didn’t even know who the character was at that stage. Then, in that moment before sleep, I imagined a place where small-minded people with petty gripes attacked a woman with domestic objects, potato peelers and pencils, inflicting pain and terror on her. I could smell the place: mothballs and blood and filth.

I fell asleep with that image and when I woke up, I wrote the first visit to the dark room in Slights.

HWA: To go off topic a bit, you recently spent a few years in Fiji. What was it like living there?

KW: It was an amazing experience. We were there as part of the diplomatic corps, which is an experience in itself. I loved the chance to meet interesting people from around the world and to form long-lasting friendships.

We lived on Viti Levu (Big Fiji), the main island. Distancewise, you could drive around the whole thing in a few hours. But the roads are not always good, and the speed limit is 80 kilometres an hour. That’s a good thing, because it’s very windy and single laned most of the way. Absolutely beautiful. Villages line the way and people are so friendly, they wave as you
pass.

We loved visiting the small islands and preferred the small resorts to the large ones. You can do day trips to Nukulau, where George Speight, the 2000 coup leader, was jailed. You can visit Naigani, which has cannibal caves (you can see the burnt walls from the cooking fires) and the remains of an ancient fort.

HWA: I can’t imagine a tropical paradise inspiring horror stories, but did you do any horror writing in Fiji?

KW: When we decided to go to Fiji, I imagined it the way most people do: an island paradise. It is partly that, but mostly it isn’t! The islands and resorts are what we know about, but it is an incredibly layered place. The culture, the people, and the history actually inspired a lot of work.

I wrote Walking the Tree there, which has many horrific elements.

I wrote a story called “Cooling the Crows,” partly inspired by the mounds of decaying cars we saw along the road from Suva to Nadi. I loved watching these things become more and more organic as each day passed.

I wrote “That Girl” for Datlow and Mamatas’s Haunted Legends. This one was inspired by the local mental hospital, and by the lively taxi drivers who drove me everywhere when I lived in Fiji.

The “Coral Gatherer” was written in one of those tropical paradise resorts I mentioned earlier, because of this sort of coral:

And there were plenty more. It is such a rich, beautiful, terrifying, fascinating, confusing place, I was constantly inspired.

“The Gaze Dogs of Nine Waterfall” was inspired by the stray dogs you see everywhere. It was also inspired by a newspaper article telling of the vampire dogs that were taking animal stock. The accepting tone of the article gave me the idea for the story.

HWA: Are there any traditional Fijian ghost stories? Or spooky legends?

KW: There are plenty of ghost stories. Fijians, both indigenous and Indo-Fijian, have a strong belief in the soul, and Fijians tell stories about the hauntings of their relatives. I had one friend who took great delight in telling me about curses which last for generations, and others which eat you from the inside.

There are the ghostly bejeweled women of Lautoka, a must-visit town near Nadi.

And there’s Udre Udre (pronounced Undray Undray), who is considered to be the last cannibal. You can visit his grave, a concrete block near Raki Raki (and that’s where the witches are, they say). It sits at the side of the road, and you could miss it if you weren’t looking. Around the concrete block sit 999 white painted rocks. Word is that every rock represents a person the man ate. They say he never shared, not even with his sons. They also say that if he had eaten a thousand people, he would be immortal.

See what I mean? Constantly inspirational! How could you not write horror stories?

HWA: You wrote two versions of Walking the Tree, each from a different character’s viewpoint. What was the reason for this? Was it difficult to do?

KW: I love reading alongside my two children, the three of us lined up with books. We talk about what we’re reading, and it struck me how wonderful it would be to be able to talk about the same book. Not a kids’ book I’d read, but a book we’d both read in our own edition. It came very naturally because the character of Morace was very strong by the time I finished Lillah’s story. I found it a brilliant way to explore the nuances of the story I was telling. Seeing it from another angle brought out the flaws and the gaps. It also meant I could layer the messages. I thought that the adult can read the kid version as well, in order to gain perspective of the things happening, to see the adults from a kid’s point of view. Children have such clarity of thought.

HWA: Tell us about your upcoming publications.

“The Gaze Dogs of Nine Waterfall” will be reprinted in Ekaterina Sedia’s Bewere the Night, from Prime Books.

The Five Loves of Ishtar, part of the three-novella series about the goddess, from Gilgamesh Press.

“Lucky Fingers,” in the Conflux Banquet Cookbook, by Gillian Polack, from Eneit Press. The Conflux Banquet is an historically accurate feast, designed by Gillian and held during the Canberra SF convention, Conflux. This year the banquet is set in 1929 aboard the Graf Zeppelin, and Gillian is mixing short stories in with the recipes.

“A Pot to Piss In” is in Lee Harris and Scott Harrison’s Voices from the Past from H&H Books. All proceeds go to Great Ormond Street Hospital.

“All You Can Do Is Breathe,” in Ellen Datlow’s Blood and Other Cravings from Tor Books.

HWA: Why did you join the HWA, and what do you hope to get from your membership?

KW: I wanted to be part of the worldwide community of horror writers, readers, and editors. I love the chance to vote in the Bram Stoker Award™ competitions for my favourite works of the year. I’m hoping to catch up with people at Readercon this year. If you see me, say hi!