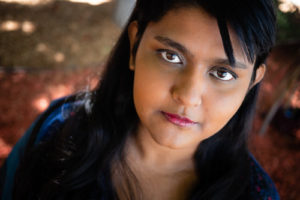 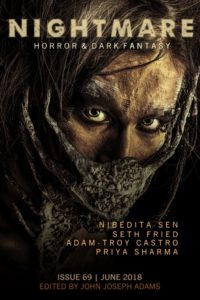 Nibedita Senis is a queer Bengali writer, editor, and gamer from Calcutta. She acquired several English degrees in India before deciding she wanted an MFA, too, and that she was going to move halfway across the world for it. She’s a graduate of Clarion West 2015, and her work has appeared in Anathema: Spec from the Margins, Podcastle, Nightmare (June 2018, Issue #69), and Fireside. These days, she can be found in New York City, where she helps edit Glittership, an LGBTQ SFF podcast, enjoys the company of puns and potatoes, and is nearly always hungry.

From “Ten Excerpts from an Annotated Bibliography on the Cannibal Women of Ratnabar Island” (forthcoming May 2019, Nightmare Magazine):

“We are all cannibals at birth, and our mother-tongue is the language of the mouth. When the Ratnabari eat of their dead, they embrace what Kristeva calls ‘the abject’—the visceral, the polluted, the blood and bile and placenta and the unclean flesh we associate with the female body. Return to us, they say to their dead, be with us always. […] Science has yet to explain how it is that they almost never bear sons, only daughters, but it is scarce to be wondered at that their society is matriarchal in nature, for they spurn the clean, rational world of the patriarchal symbolic, remaining locked in a close, almost incestuous relationship with the maternal semiotic instead.” 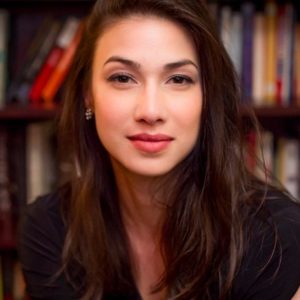 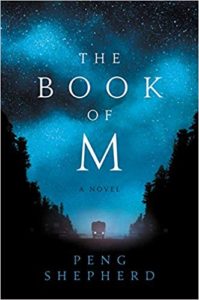 Peng Shepherd was born and raised in Phoenix, Arizona, where she rode horses and trained in classical ballet, and has lived in Beijing, Kuala Lumpur, London, Los Angeles, Washington, D.C., and New York. Her debut novel, The Book of M, was chosen as an Amazon “Best Science Fiction and Fantasy Books of the Year,” and has been featured on THE TODAY SHOW, NPR ON POINT, and in The Guardian, io9 Gizmodo, SYFY Wire, Book Riot, and Elle Canada. She is a graduate of New York University’s MFA in Creative Writing program and a winner of the Elizabeth George Foundation’s emerging writers grant.

Set in a dangerous near future world, The Book of M tells the captivating story of a group of ordinary people caught in an extraordinary catastrophe who risk everything to save the ones they love—a sweeping debut that illuminates the power that memories have not only on the heart, but on the world itself.

Praise for The Book of M: “Eerie, dark, and compelling, [The Book of M] will not disappoint lovers of The Passage and Station Eleven.” – Booklist 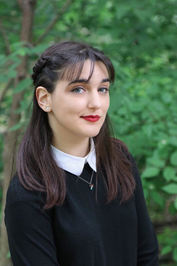 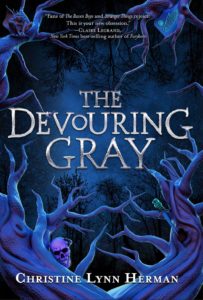 Christine Lynn Herman. Born in New York City but raised in Japan and Hong Kong, Christine subscribes to the firm philosophy that home is where her books are. She returned to the United States to study at the University of Rochester, where she received the Dean’s Prize in fiction and an Honors English degree. Currently, Christine and her books reside in a Brooklyn apartment, along with her partner, many plants, and their extremely spoiled cat.

The Devouring Gray – After the death of her sister, seventeen-year-old Violet Saunders finds herself dragged to Four Paths, New York. Violet may be a newcomer, but she soon learns her mother isn’t: They belong to one of the revered founding families of the town, where stone bells hang above every doorway and danger lurks in the depths of the woods.

Justin Hawthorne’s bloodline has protected Four Paths for generations from the Gray—a lifeless dimension that imprisons a brutal monster. After Justin fails to inherit his family’s powers, his mother is determined to keep this humiliation a secret. But Justin can’t let go of the future he was promised and the town he swore to protect.

Ever since Harper Carlisle lost her hand to an accident that left her stranded in the Gray for days, she has vowed revenge on the person who abandoned her: Justin Hawthorne. There are ripples of dissent in Four Paths, and Harper seizes an opportunity to take down the Hawthornes and change her destiny-to what extent, even she doesn’t yet know.

The Gray is growing stronger every day, and its victims are piling up. When Violet accidentally unleashes the monster, all three must band together with the other Founders to unearth the dark truths behind their families’ abilities…before the Gray devours them all.