I have a number of friends who give themselves reading challenges every year. One friend decided she would read at least 52 books in a year. When the next year came along she added ten more. Another, Alexander Chee, realized he had read mostly men in the past year, so he dedicated the year to reading women. He wrote about it here. Another still said he would only read writers of color. What will you do in your new year?

Claire C. Holland is a poet and writer from Philadelphia, currently living in Los Angeles. She received her BA from Washington College in English and creative writing, with a concentration in poetry. She’s been a freelance writer for more than ten years, writing primarily about film and U.S. law. Holland’s first book of poetry, I Am Not Your Final Girl (an SFPA Elgin award-nominated book), is available now from Amazon.

When not writing, she can usually be found reading or binge-watching horror movies with her wonderful husband, Corey, and her Wheaten Terrier, Chief Brody. She’s also a feminist (should go without saying but apparently does not), a tattoo lover, and interested in all forms of art strange and subversive. Always up for a chat about anything horror-related, so don’t be afraid to reach out on social media!

I Am Not Your Final Girl, a collection of feminist-horror poems about final girls. The poems confront the role of women throughout history in relation to subjects such as feminism, violence, motherhood, and sexuality. Each poem is based on a fictional character from horror cinema and explores the many ways in which women find empowerment through violence and their own perceived monstrousness.

Recommended reading from: I Am Not Your Final Girl.

A woman’s body was made for this,
for birthing, for enduring

hours of pulsating pain, but no birth,
no ingress into this world should hurt

this much. A blade in her back,
it threatens to bubble up from inside,
to pour from her prone and twisting
body, everywhere, frothing

into cracks in the cement, heavy
like paint. And so she thrashes, smashes

her head against the tunnel walls
like a dervish, a devil woman demented

and godlike, with her too-many arms
waving, a container for grief and this other

thing she cannot name. A broken
discontent, willing itself to life. 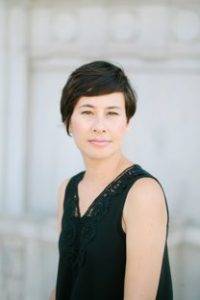 Shawna Yang Ryan is a former Fulbright scholar and the author of Water Ghosts (Penguin Press, 2009) and Green Island (Knopf, 2016). She is the Director of the Creative Writing Program at the University of Hawai’i at Manoa. Her writing has appeared in ZYZZYVA, The Asian American Literary Review, The Rumpus, Lithub, and The Washington Post. Her work has received the Association for Asian American Studies Best Book Award in Creative Writing, the Elliot Cades Emerging Writer award, and an American Book Award.

Locke, CA, 1928—Three bedraggled Chinese women suddenly appear out of the mist one afternoon in a small Chinese farming town on the Sacramento River, and their arrival throws the community into confusion. Two of the women are unknown to the townspeople, while the third is the long-lost wife of Richard Fong, the handsome manager of the local gambling parlor, who had left her behind in China many years earlier and had not yet returned for her. 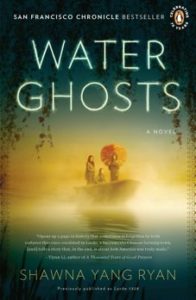 Richard’s wife’s unexpected arrival complicates his life in no small way—not least with two prostitutes at the local brothel he frequents. One, the beautiful young Chloe, depends on him but has eyes for someone else, someone even more forbidden—the local preacher’s daughter. The other, Poppy, the psychic madam of the brothel, is desperately in love with him, and she begins to sink into despair as he grows further and further away from her.

As the lives of the townspeople become inextricably intertwined with the newly arrived women, Poppy’s premonitions begin to foretell a deep unhappiness for all involved. And when a flood threatens the livelihood of the entire town, the frightening power of these mysterious women who arrived in the mist will be revealed.