Just in time for your holiday shopping, our Seers’ Table brings you some creepy, wonderful reading! 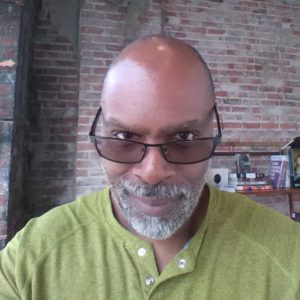 Zig Zag Claybourne grew up watching The Twilight Zone and considers himself a better person for it. His fiction and essays have appeared in Apex, Strange Horizons, Vex Mosaic, Stupefying Stories, UnCommon Origins, The City (a cyberfunk anthology), and more. He loves promoting great art and posing the Great Questions, such as whether or not anybody can ever be funkier than Prince. You can find interviews and articles scattered throughout the Web, but if you really want to get to know him, there are two essential online pieces:

His book, Brothers Jetstream, takes the reader on a wild adventure with language that’s beautifully hip and chaotically surprising at the same time. When the Brothers Jetstream and their crew seize the chance to rid the world of the False Prophet Buford, other evils decide they want a piece of him too. A wild race ensues to not only destroy Satan’s PR man … but make sure no one else gets to him first.

He’s currently working on the sequel to the Brothers Jetstream, Afro Puffs Are the Antennae of the Universe.

Maseef looked out at the expanse of water for a silent moment. Milo followed his gaze. The ocean at night was terrifying for the uninitiated. There were huge things underneath which sometimes ate things. Huge ancients that were gigantic sets of teeth with human-sized gaps between them. They were called singularities, dark holes in the darker night of the ocean, that sometimes rushed from below and bit whales in half so quickly and cleanly no one was likely to know. Singularities were nocturnal.

He and Maseef bobbed the waters of this night.

The Brothers Jetstream were never terrified of what they could not see.

Laura Mauro was born in southeast London and currently lives in Essex under extreme duress. Her work has appeared in Black Static, Interzone, Shadows & Tall Trees, and a wide variety of anthologies. Her debut novella, Naming the Bones, was published in 2017, and in 2018 her work was shortlisted for both a Shirley Jackson Award and a British Fantasy Award. When she’s not making things up she enjoys watching wrestling, attempting to learn Japanese, collecting tattoos, and dyeing her hair strange colours. She is currently studying toward a Master’s in Modern and Contemporary Literature and has thrown her copy of James Joyce‘s Ulysses across the room more than once. She blogs sporadically at http://www.lauramauro.com. 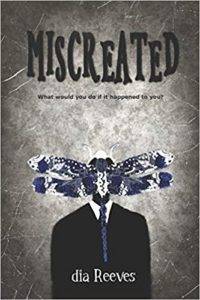 Dia Reeves writes weird books that are difficult to classify. She is a suspiciously analytical INFP, which is probably why it’s more comfortable for her to write about random surreality than about real things that really happen. Real things are scary. Dia lives in Dallas and hides from everyone. Good luck getting an autograph; the odds are not in your favor. If you’re feeling lucky, though, try contacting her at diareeves.com. You can even sign up to be notified of new releases. She lives in Dallas, works as a librarian, and her favorite fictional villain is Gretchen Lowell.

Her novel, Miscreated, is available from Amazon. Summary: Jimi Elba has it all: good looks, popularity, money, and the arrogance that goes with it. But he’s undergoing a change, an unthinkable transformation that turns everyone against him, including his family and friends. Jimi, who’s grown up in a town where the mayor is over three hundred years old and doors to other worlds sometimes appear in midair, decides to show everyone that being a freak of nature isn’t so bad. With the help of a peculiar girl who always seems to show up whenever someone commits suicide, Jimi’s quest for acceptance leads him in and out of the world on surreal rescue and recovery missions, into fierce battles with creatures more monstrous than Jimi could ever be, and finally to his true birthplace. But a birthplace isn’t a home, and more than anything, Jimi wants to find a place to belong. 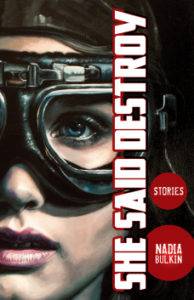 Nadia Bulkin says, I write stories that I like to call “socio-political horror,” or, scary stories about the scary world we live in. Here, have a quote that sums up my writing aesthetic:

I write fiction about politicians, generals, kings and queens; the disenfranchised and the dispossessed; outcasts, clerics, and pillars of society. I write about blowback and weapons of mass destruction: ghosts and demons and witch doctors. I write about people who, through a combination of circumstances and ambitions, take a ride down the road of no return.

I also write nonfiction about sports, and what we really talk about when we talk about sports. I grew up in Nebraska, so I watch college football, and I live in Washington, D.C., so I watch baseball and hockey, and for no good reason, I watch tennis. Tennis really stresses me out.

Her first collection of stories, She Said Destroy, is available here: https://www.amazon.com/dp/1939905338/. A dictator craves love—and horrifying sacrifice—from his subjects; a mother raised in a decaying warren fights to reclaim her stolen daughter; a ghost haunts a luxury hotel in a bloodstained land; a new babysitter uncovers a family curse; a final girl confronts a broken-winged monster … Word Horde presents the debut collection from critically-acclaimed Weird Fiction author Nadia Bulkin. Dreamlike, poignant, and unabashedly socio-political, She Said Destroy includes three stories nominated for the Shirley Jackson Award, four included in Year’s Best anthologies, and one original tale, with an introduction by Paul Tremblay.

You can learn more about her here: https://nadiabulkin.wordpress.com/about/.