The Challenges of Writing a Spook Show by David Lucarelli

Before there were TV horror hosts, haunted houses, and the Rocky Horror Picture Show, there were spook shows. Now a nearly forgotten bit of Americana, these once incredibly popular shows toured around the country on the movie theater circuit from the 1940’s through the 1960’s. In some ways the last vestige of vaudeville, they featured comedy, spooky magic, a little burlesque and often a séance. A half-century before it was a term, the spook shows were also on the cutting edge of “immersive” theater. The climax of every show was a “blackout sequence,” in which the audience was placed in total darkness, surrounded by supernatural phenomena they could see, hear and feel. They had all kinds of tricks to make that happen. 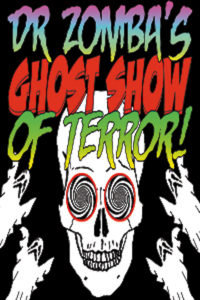 I first became aware of the spook shows when I stumbled upon Ghostmasters Mark Walker’s wonderful book about their history. I badly wanted to see a spook show, but because they are almost entirely extinct, I quickly figured out that the only way to do so would be to write and produce one myself.

As a writer, that provided a number of challenges. Today the lurid and sensationalistic advertising posters and a few bare bones movie trailers are practically all that remains of the shows themselves. To my knowledge, none of the classic spook shows were ever filmed. Scripts for the shows are almost impossible to find. Because they were so popular, a number of the spook shows eventually franchised themselves, and produced “manuals.” While far short of full scripts, they reveal many of the secrets of how to put the shows on, and enough suggested patter that one can reconstruct a rough estimate of the spook show experience. HWA’s President Lisa Morton was kind enough to provide me with one of these manuals, and I was able to find another through my research. 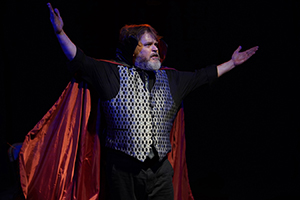 The next challenge I faced, was trying to write a script before the show had been cast, and I knew what tricks our magician would have in his repertoire. As luck would have it, I was introduced to actor/magician David M. Beach. David brought to the table a number of additional skills (juggling, ventriloquism) and some unique routines he had developed over the years that more than lent themselves to the show. Once David was on board, I was able to further flesh out the script, confident of what we could pull off. 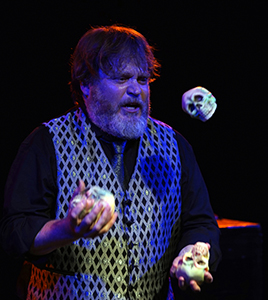 David also possessed a unique intensity that made him a perfect “ghost master.” I wasn’t the only one who thought so. He was actually chosen to take over the role of one of the classic original ghost masters “Doctor Silkini,” several years ago by producers that owned the rights to the show. That revival didn’t end up happening, but it did put David in possession of a full script for a spook show to compare to my own. Without borrowing anything directly, I was at able to satisfy myself that we had captured the spirit of the original shows, while putting our own spin on it.

That spin was necessary, because there are a number of problems with reviving a spook show exactly as it was done more than a half century ago. Some of the bits had aged poorly. The idea of holding a spontaneous dance contest in the audience, or surreptitiously spraying an audience member in the crotch with seltzer water, and then making fun of them for having wet themselves in fright, didn’t seem like they’d go over well today. 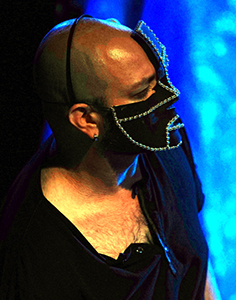 The other aspect of the spook shows was that they were in many ways, a con. The posters would make outlandish claims of what the shows entailed and the shows would fulfill these promises in the barest minimum way possible.  Of the “10,000 Ghosts” said to “Invade The Theater!” the audience was lucky if in reality, there were two. While some shows strived to provide more entertainment value than others, the P.T. Barnum-like hype always outweighed what they could actually deliver. By the time the audience had seen the show, satisfied or not, the spook show was already packing up on the way to the next town. Of course, to some, that was part of the fun and charm of the show itself. We, on the other hand, wanted to produce a show that would satisfy ALL our audience.

My solution was to write a play that was in some ways post-modern: a spook show that was also a play about a spook show. One that also tacitly acknowledged chicanery of the original shows. It was also my theory that having a story line running throughout would help hold the audience’s interest and keep the show from merely being a series of unrelated spooky tricks and comedy bits.

The final key to writing the show was incorporating the creativity of the cast. While HWA’s Kevin Wetmore directed rehearsals, the actors were encouraged to improvise additional dialogue.  I took copious notes so that when their improvised lines improved upon my own, I could add them to the script.

So how did it all go? We played to sold out crowds and rave reviews. We won the Fringe Producer’s Extension Award, the Double Sweet Better Lemons Award (from audiences and critics alike), and perhaps most importantly, we won Midsummer Scream’s “Screamiest Award.”

Hollywood Gothique said the show was “a treat that will satisfy your horror craving and tickle your funny bone.”

In fact, the show was so successful that we’re bringing it back to Hollywood for the Halloween season. All attendees must sign a medical waiver! We are not legally responsible if the Ghost Show scares you to death! Fall under Dr. Zomba’s hypnotic spell! See Sirena’s Dance of the Damned! We make contact with the dead and unleash monsters from beyond the grave!

Get your tickets HERE, and save 5 dollars a ticket with discount code: hwa

TODAY’S GIVEAWAY:  David Lucarelli is giving away a pair of tickets to the October 20th performance of Doctor Zomba’s Ghost Show of Terror!  The first person to email David at dlucarelli@earthlink.net with the subject title “HWA Ghost Show Giveaway” wins!

BIO: David Lucarelli is the writer/producer of Doctor Zomba’s Ghost Show of Terror, The Children’s Vampire Hunting Brigadegraphic novels, and Tinseltown, from Alterna Comics. You can contact him on Facebook: https://www.facebook.com/david.b.lucarelli