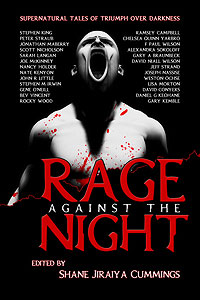 Under the onslaught of supernatural evil, the acts of good people can seem insignificant, but a courageous few stand apart. These brave men and women stand up to the darkness, stare it right in the eye, and give it the finger. These are the stories of those who rage against the night, stories of triumph, sacrifice, and bravery in the face of overwhelming evil.

All proceeds will be donated to Rocky Wood, author and President of the Horror Writers Association, who is battling motor neurone disease.

(in order of appearance)

Rage Against the Night can be purchased as an ebook from Amazon and Smashwords.

It will soon be available from Barnes & Noble, Apple, Sony, Diesel, and all other leading online retailers. The print version will be available in late January.