Turning the Page, 2019’s Oklahoma Writers’ Federation, Inc., annual conference, was held May 2-4 this year. Taking over much of the usual venue, Embassy Suites on South Meridian in Oklahoma City, the conference offers workshops, panels, and sessions presented by experts, both locally and nationally known.

Attendees come from Colorado, New Mexico, Kansas, Missouri, Arkansas, Texas, and Oklahoma as well. It’s not unusual for a former Oklahoman to come back from farther away.

One of the features of the conference is the presentation of awards for the writing contests. Submissions are open December 1 with thirty-four numbered categories and the Crème de la Crème Award. Sponsored by community businesses and individuals, the categories range from poetry to articles, memoirs to fiction and blogs of all lengths. Except for best published novel, all entries are unpublished and are submitted electronically. All genres are represented as well as age levels. Entry fee is $35, which gives an author the opportunity to enter as many categories as they want. Some enter only one, while the highest number of entries I heard about this year was 19. Cash awards for first through third places, with a trophy also awarded for the Crème de la Crème.

Officially, the event begins on Friday, but each year there is a Thursday evening pre-con workshop. This year, Tamara Hart Heiner was the presenter; the topic was “Writing Hard Topics for Teens while Avoiding the Smut.” She touched on writing several genres for the age group, including horror, romance, and coming of age.

Opening session was scheduled for 8:30 a.m., Friday. During the day, four rooms were set up for sessions, from 9:10 a.m. until 4:10 p.m. on both Friday and Saturday. Lunch workshops were also scheduled both days with a guest speaker. Friday’s speaker was Robin Patchen, whose topic was “Writing When Life Gets in the Way.” John Biggs was Saturday’s presenter, the topic being “Let Magic Realism Work Its Spell on Your Fiction.”

One of the unusual features of this conference: two banquets. Friday night’s banquet is a celebration of the authors and a costume contest. The theme this year was “Good vs. Evil” and about one-third of attendees were in costume. (I went as Offred from The Handmaid’s Tale.) The winners of the writing contests are announced at Saturday night’s event, which is usually a dressy to semi-formal affair.

On both Thursday and Friday, a room is set up for attendees to meet and pitch to agents and editors who are invited to attend. This year, the agents who attended were Amelia Appel (TriadaUS Literary Agency), Amy Brewer (Metamorphosis Literary Agency), and Paul S. Levine (Paul S. Levine Literary Agency). Editors from both large and small publications included Shannon Iwanski (A Murder of Storytellers), Ally Robertson (Wild Rose Press), Melissa Ann Singer (Tor/Forge), and Vivian Zabel (4RV Publishing).

Keynote Speaker was Meg Gardiner, Edgar-winner, and author of thrillers. She was born in Oklahoma City, raised in Santa Barbara, California, and now lives in Austin, Texas. Her keynote address—Inspiration, Craft, and Elbow Grease: A Writer’s Journey—was a delight, mixing humor with writing advice and her own experiences as a beginning writer through trials and tribulations to ultimate success. Her first novel was published in London with later publication in New York, thanks in part to a rave review of her novels by Stephen King.

The OWFI annual conference isn’t an inexpensive affair. Registration for the full weekend is $175, which includes each of the banquets. Guest tickets for the banquets are $50 for each night. The lunch workshops cost $25 each, while the Thursday evening pre-conference workshop is $20. The fees add up, but not everyone attends every special affair. Between 400 and 500 writers attend each year.

Attendees are a varied group in age, ethnicity, and locale.  They are also at all levels of proficiency as writers, newbies to authors with dozens of credits, traditionally published authors to indies. The sessions are varied and presented by knowledgeable experts. All sessions are recorded, both video and audio.

Attendees can take advantage of free breakfast in the hotel dining room if they are guests of the hotel. Lunch is not free, but a happy hour offers a free drink to guests of the hotel, beginning at 5 p.m. There is also a lounge with drinks and food available in the evening.

Over the years, the conference has grown in friendliness and attendance. Every sort of author comes from the region, described earlier, and I’ve heard of members coming from more distant parts of the country.

A good time was had by all, at least everyone I spoke with, or heard from across the room, or who posted on Facebook. I look forward to going each year myself, and seeing friends I only see once a year, those I chat with on Facebook, and those few who I join at book signings at bookstores, libraries and other venues around the state.

Cary Osborne earned a B.A. in both history and communications from Mary Baldwin College, and an M.L.I.S from the University of Oklahoma. She lives in Edmond, Oklahoma, with her beloved husband. 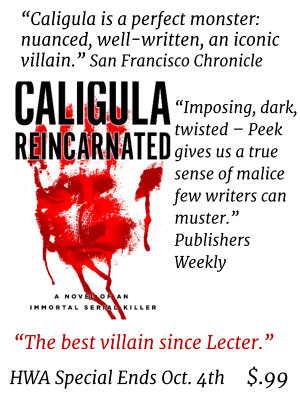