October has one of our favorite holidays in it—HALLOWEEN!!! Check out some folks creating cool, creepy stuff. 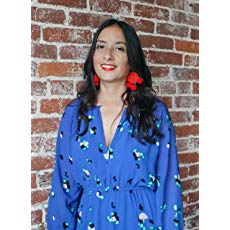 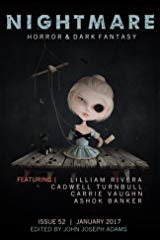 Lilliam Rivera is an award-winning writer and author of the young adult novels Dealing in Dreams (March 2019) and The Education of Margot Sanchez (February 2017), published by Simon & Schuster and available in bookstores everywhere. Dealing in Dreams has been featured in Teen Vogue, PBS Books, Los Angeles Times, and Bustle, among other outlets, and has received starred reviews by the School Library Journal and Booklist.

The Education of Margot Sanchez was nominated for a 2019 Rhode Island Teen Book Award, a 2017 Best Fiction for Young Adult Fiction by the Young Adult Library Services Assn. (YALSA), and has been featured on NPR, New York Times Book Review, New York magazine, MTV.com, and Teen Vogue, among others.

She is a 2016 Pushcart Prize winner and a 2015 Clarion alumni with a Leonard Pung Memorial Scholarship. Lilliam has also been awarded fellowships from PEN Center USA, A Room Of Her Own Foundation, and received a grant from the Elizabeth George Foundation and the Speculative Literature Foundation. Her short story, “Death Defiant Bomba,” received honorable mention in Bellevue Literary Review‘s 2014 Goldenberg Prize for Fiction, selected by author Nathan Englander. She recently received honorable mention in the 2018 James Tiptree, Jr. Literary Award.

Lilliam’s work has appeared in The New York Times, Elle, Lenny Letter, Tin House, Los Angeles Times, and USA Today, to name a few. She has been a featured speaker in countless schools and book festivals throughout the United States and teaches creative writing workshops.

“I give the chain attached to the radiator in her bedroom another tug. There’s enough slack for her to move about the room but not enough for her to get out. Her breath stinks like spoiled milk, so I inhale through my mouth. I try my best not to look directly at her face because if I do I won’t be able to go through with it. There are two thick layers of aluminum foil and garbage bags covering her bedroom windows. To secure the layers tight, I nail the quilt from off my bed to the wall. This has to work. Tomorrow I go back to school. If anyone were to find out they would take Mamí away. I’ll never let that happen. Not to Mamí. Not to us.

The idea for the chains came to me after reading an article on how this mother and father tied up their fourteen-year-old daughter to the radiator using a bike chain. They swore their daughter was possessed. The paper ran a photograph of the girl. There was nothing demonic about her but if you looked closely, you can see the slight film covering her eyes like gauze. Most people would have never noticed it, but I did. She had Mamí’s eyes.”

Lilliam is represented by Eddie Schneider of JABberwocky Literary Agency. She lives in Los Angeles.

You can find Lilliam Rivera at http://www.lilliamrivera.com/ or on Twitter: @lilliamr. 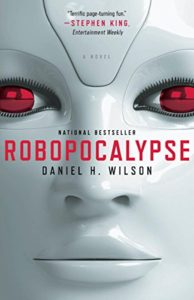 Daniel H. Wilson is a Cherokee citizen and author of the New York Times-bestselling science fiction horror novel Robopocalypse and its sequel Robogenesis, as well as many other books, including How to Survive a Robot Uprising, The Clockwork Dynasty, and Amped. He earned a Ph.D in Robotics from Carnegie Mellon University, as well as a Masters degree in Artificial Intelligence and Robotics. His latest novel (to be released November 12, 2019) is an authorized stand-alone sequel to Michael Crichton’s classic The Andromeda Strain, called The Andromeda Evolution. Wilson lives in Portland, Oregon.

“Things pop along at a wonderfully breakneck pace, and by letting his characters reveal themselves through their actions, Wilson creates characters that spring to life. Vigorous, smart and gripping.” — Kirkus

“A brilliantly conceived thriller that could well become horrific reality. A captivating tale, Robopocalypse will grip your imagination from the first word to the last, on a wild trip you won’t soon forget. What a read…unlike anything I’ve read before.” — Clive Cussler, New York Times-bestselling author

You can find Daniel H. Wilson at http://www.danielhwilson.com/ or on Twitter: @danielwilsonpdx. 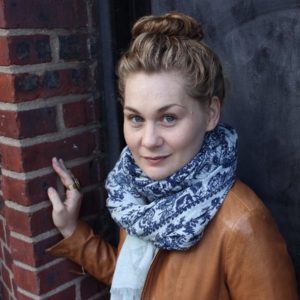 The Merciless has been acquired by Lionsgate with PRETTY LITTLE LIARS creator I. Marlene King onboard to write and Hannah Macpherson directing.

Survive the Night has been acquired by Warner Bros. with Pharrell Williams producing, and Tracy Oliver, the writer behind the hit comedy GIRLS TRIP, set to write the script and direct.

Her newest project, the sweeping time-travel trilogy Stolen Time, was acquired by HarperTeen at auction in 2016. Foreign rights have already sold in France, Germany, Brazil, and Spain.

Recommended Work: The Haunted. From Danielle Vega, YA’s answer to Stephen King, comes a new paranormal novel about dark family secrets, deep-seated vengeance, and the horrifying truth that evil often lurks in the unlikeliest of places.

Hendricks Becker-O’Malley is new in town, and she’s bringing baggage with her. With a dark and wild past, Hendricks doesn’t think the small town her parents moved her to has much to offer her in terms of excitement. She plans on laying low, but when she’s suddenly welcomed into the popular crowd at school, things don’t go as expected.

Hendricks learns from her new friends that the fixer-upper her parents are so excited about is notorious in town. Local legend says it’s haunted. Hendricks doesn’t believe it. Until she’s forced to. Blood-curdling screams erupt from the basement, her little brother wakes up covered in scratches, and something, or someone pushes her dad down the stairs. With help from the mysterious boy next door, Hendricks makes it her mission to take down the ghosts … if they don’t take her first. 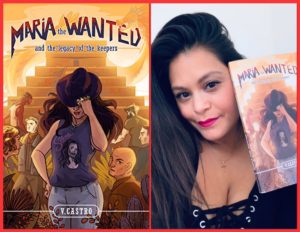 This month I have the pleasure of bringing to your attention a horror writer with a foot on two continents. Violet Castro hails from San Antonio, Texas, but currently lives in the UK. She writes film and book reviews for SciFi and Scary from her home across the pond, and, lucky for us, Ms. Castro published her newest project this year: Maria the Wanted and the Legacy of the Keepers.

She credits books like Bram Stoker’s Dracula and Scary Stories to Tell in the Dark by Alvin Schwartz for putting horror into her heart. She has stated that it was hard to overcome the fear of exposing her writing to the world, but she finally did it. Kudos to her for overcoming those insecurities that plague us all and giving the world the gift of her innermost thoughts.

Maria is a Mexicana vampire from Juarez, Mexico, who has to abandon her original hopes and dreams when she is turned during a slaughter at the maquiladora where she worked. She becomes a dark enforcer of justice, wreaking vengeance for those that others would take advantage of, providing a sense of justice she did not receive while alive. The novel follows Maria through her journey of self-acceptance to what she has become and forming a new life that defines a woman’s power and grace through trials and tribulations. I thoroughly enjoyed this new spin on the vampire tale and its connection to Mexican historical figures like Quetzalcoatl and Tizoc. Maria is a total badass in the best way—just like her creator and the world needs MORE of this. Stay tuned as I hear this is just the first book in the series!

Recommended Reading: Maria the Wanted and the Legacy of the Keepers. He glanced back at his companions again. “Do you want to live in death? I’ve never saved anyone in my life and I’m not about to start now. I will only give you a gift. Do you want my gift?”

“Si,” she answered with hope as small as the child inside of her. Maybe the Sacred Heart still burned. Tears drenched the stranger’s fingers. Maria’s fear throbbed and writhed inside her as she wondered what would happen next. The stranger reached for a pair of scissors lying on the table. With a swift motion, he sliced open his wrist. Before she could react, his body was leaning over her and two long needles punctured her neck. A roar of laughter and howling filled her ears as the warmth drained from her skin. Pinpricks of pain dotted her body.

This was the end. The end of Diego, their baby, The States, night school, a good job. This was the death of the only dream she had ever dared to dream. Maria could feel her eyes become heavy while a small tide of blood moved down her throat, nearly choking her.

The gringo placed his hand over her lips. “Don’t move until we leave. Your boss will be back soon, so I hope you enjoy your vengeance, Maria.” A wicked smile, and then he closed her eyes. She kept them shut.

“We didn’t think you had it in you!” The other two were still reveling in their killing spree. “You old vamps are all the same. You forget how to party!” 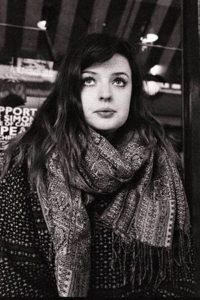 Sarah Maria Griffin is an Irish writer and poet living in Dublin. Griffin began writing poetry before beginning to write articles for newspapers. This became her first book, Follies. She was selected as Writer-In-Residence at NUI Maynooth for the 2018-2019 year, and in 2007 she won the European Science Fiction Awards Chrysalis Award. Griffin has written for a number of publications and currently writes a podcast for The Irish Times. She writes about monsters, growing up, and everything those two things have in common. Other titles she has authored include Not Lost: A Story of Leaving Home and Spare and Found Parts.

Recommended Reading: Other Words for Smoke. When the house at the end of the lane burned down, none of the townspeople knew what happened. A tragedy, they called it. Poor Rita Frost and her ward, Bevan, lost to the flames. Only Mae and Rossa, Rita’s niece and nephew, know what happened that fateful summer.