The fourth annual StokerCon has now come and gone, and most attendees seemed to think it was the best yet.

If this year’s event had a theme, it would be “family”: it was what Jonathan Maberry talked about in his moving and funny opening to the Bram Stoker Awards® presentation, it was at the heart of Kennikki Jones’s Final Frame Film Competition winner KNOCK KNOCK, and I talked about it when I led the Opening Ceremonies. Perhaps it has to do with how divided so many other parts of modern life are, but for the four days of the 2019 StokerCon, horror felt like one big, happy family, united in the love of a genre. 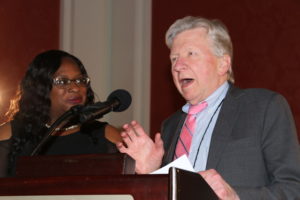 I got to tour a little of our host city, Grand Rapids, on Thursday, and was pleased to see how many local businesses had signs welcoming our convention. Grand Rapids is sometimes called “Beer City,” and I did manage to visit three of the local brewpubs while I was there. StokerCon started on Thursday afternoon, with programming kicking in before the official Opening Ceremonies.  I was able to attend exactly one panel I wasn’t on—a Social Media discussion—and I learned so much out of it that I’ll soon be overhauling my Web site (thanks to Meghan Arcuri, Beverly Bambury, Lucy Snyder, and J.D. Barker for the tips!).

For the Opening Ceremonies, I had the pleasure of introducing our outstanding line-up of Guests of Honor: Kathe Koja, Josh Malerman, Robert McCammon, Kaaron Warren, and Stephanie M. Wytovich (unfortunately one Guest, Josh Boone, had to cancel two weeks before the convention, as did our Lifetime Achievement Award winner Graham Masterton), and our awards emcee Jonathan Maberry. The Opening Ceremonies also featured a catered reception, and then HWA’s officers and trustees adjourned for a private business meeting.

Thursday evening closed out with Josh Malerman’s extraordinary “reading,” which was really more like performance art incorporating live music, actors, props, and amazing masks (made by Josh’s gifted fiancée Allison Laakko, who was also part of the cast). The performance included material from three of Josh’s novels: Bird Box, Unbury Carol, and his latest, Inspection.

Friday began with a bang as I joined with Antonio d’Intino, Literary Manager at the film management and production company Circle of Confusion (THE WALKING DEAD) to announce a forthcoming short story competition. This contest, which will be open only to current HWA members, will offer five winners the opportunity to discuss representation by Circle of Confusion (stay tuned for the announcement regarding the dates and details of the contest). 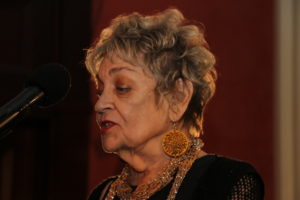 The major event for Friday evening was the Final Frame Film Competition, directed by Jonathan Lees. The films, which played to a packed house, proved to be extraordinary in the breadth of both style and geographical location, and the six judges—Antonio d’Intino, Lynne Hansen, Jonathan Maberry, Josh Malerman, John Skipp, and yours truly—had a hard time choosing a winner, but finally decided that Kennikki Jones’s KNOCK KNOCK had knocked all of our socks the furthest off. We were doubly thrilled to discover that Kennikki lived nearby and would be able to join us the following day; presenting this talented young filmmaker with her award during the Bram Stoker Awards presentation on Saturday night was a convention highlight for me. The Final Frame component also came with a Mac ‘N’ Cheese bar that had me going back for seconds (I’ve got a new fondness for mac ‘n’ cheese and scallions).

Friday closed with Kathe Koja’s thought-provoking and disturbing “The Art of Darkness,” an interactive performance that had attendees peering into mirrors and reading sections of randomly-distributed books aloud.

Saturday’s programming climaxed with the Bram Stoker Awards presentation, wonderfully emceed by Jonathan Maberry (who was carefully supervised by our last emcee Jeff Strand). At the conclusion of the awards presentation (see elsewhere for a list of the winners), I was pleased to pass the Presidential baton to John Palisano, who made two announcements: StokerCon 2020 (held in Scarborough, U.K.) will include Grady Hendrix as a Guest of Honor, and StokerCon 2021 will be held at The Curtis Hotel in Denver, Colorado. 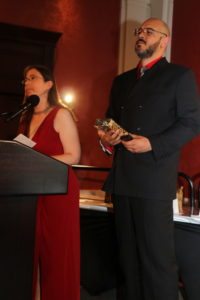 Sunday saw the convention close down with the HWA General Meeting, always a forum for the exchange of some fantastic ideas, and the Closing Ceremonies.

I would like to offer a final note of thanks to our astonishing convention chair Brian Matthews, our entire convention Committee, our fabulous Guests of Honor, our attendees, and the warm, attentive staff of the Amway Grand Plaza Hotel.

My last thanks go to our new President John Palisano, who navigated the convention like a true champ, ably demonstrating that he’s going to be a superb leader for the organization.