So we have reached the third part of our series and will take a look at Swedish horror movies.

Side note: Scandinavia consists of Denmark, Norway and Sweden. If you include Iceland and Finland, we’re known as the Nordics. This includes Greenland and the Faroe Islands, which are both part of the Kingdom of Denmark.

To outsiders the Scandinavian nations seem to be all the same, but we have a pretty complex relationship internally. Denmark and Sweden have been rivals for more than a thousand years and fought 42 wars against each other. I believe that is a world record.

Today, we have peace and an excellent relationship, but we do enjoy poking fun at each other. It’s typical that the worst insult a Finn can use against Denmark is to call it “Stupid Sweden.”

Onward to the movies.

Sweden has less of a tradition in horror than Denmark and Norway, but their one hit was massive. 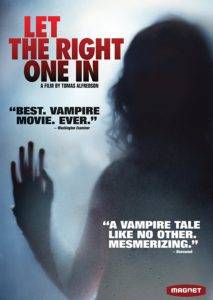 LÅT DEN RÄTTE KOMMA IN / LET THE RIGHT ONE IN from 2008 is one of the highest-ranking movies to ever come out of Scandinavia.

Oscar is twelve years old and is being mercilessly bullied. He develops a friendship with a strange girl from the block, and, as the story progress, it becomes clear that she is not really human. People begin to die, and it turns out that when you are in dire need, a vampire friend is handy to have.

The director ignored most conventions from horror and vampire movies and instead focused on the relationship between the two characters, all set against a backdrop of bleak social realism.

Critics praised it as a fresh take on the vampire genre.

But unfortunately it was not allowed to stand alone. An American version was released in 2010 against the wishes of the original director Tomas Alfredson. Featuring Chloë Grace Moretz, the movie was well-received by critics but didn’t deliver at the box office.

I will recommend any fan of horror to watch the original version at least once. 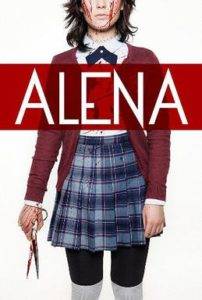 ALENA from 2015 is based on a Swedish graphic novel.

The local teenager Alena is transferred from her public high school to an elite private girls’ academy where she’s one of the few students who isn’t a rich boarder. She quickly learns that status makes her a target for Filippa, the noxious ringleader of a small mean-girl posse.

Alena does have a protector, though: a mysterious girl who will get violent in her defence and whom other people don’t appear to be able to see.

The original graphic novel is highly praised, but the movie got a mixed reaction. Most reviews lament that the story hinges on a twist that most viewers figure out long in advance. 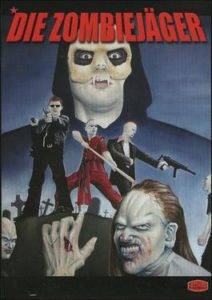 DIE ZOMBIEJÄGER is a Swedish exploitation film from 2005.

I could find almost nothing about this movie, but it’s clearly a no-budget gritty affair. I mostly included it because of the pretty awesome poster.

The description is from Wikipedia.

During a time in the near future, Gothenburg has been invaded by zombies. The police are powerless, and a team of German zombie hunters are called in to solve the problem and clean up the city and find out what is causing the zombie epidemic. On their way through the streets of Gothenburg, they run into several obstacles. For example, they come across an Italian assassin and some Swedish reporters on the wrong side of the barricades.

There was a prequel released in 2010 called: DRAGONETTI: THE RUTHLESS CONTRACT KILLER.

The budget seems to be increased.

Interestingly, where Norway gravitates heavily toward the slasher genre, Sweden is drawn to vampires. They produced three vampire movies in a short amount of time from 2006 to 2008, where LÅT DEN RÄTTE KOMMA IN is clearly the most successful.

FROSTBITE from 2006 was considered a failure in Sweden, but was well-received by international critics.

FROSTBITE takes place in northern Sweden during midwinter, which creates the perfect hunting ground for vampires, since the sun will not be up during the day. It’s basically the same premise as the much more well-known 30 DAYS OF NIGHT, which came out the following year. 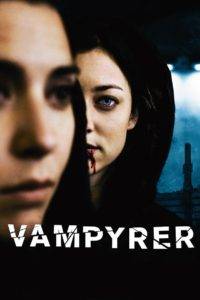 Vera and Vanja are vampire sisters—a breed that is human-like but can only survive on blood. They have the cravings of vampires but none of the special powers. When they kill a biker they are afterwards hunted by the rest of the gang.

The movie was poorly received and has been referred to as “the worst vampire film of all times.”

And there you have it.

A look at horror movies from the Scandinavian region.

I hope this three-parter has inspired you to seek out a few movies from outside markets, because there’s plenty of gold out there.

I will leave you with three recommendations—one from each nation: LET THE RIGHT ONE IN from Sweden, TROLLHUNTER from Norway, and WHEN ANIMALS DREAM from Denmark.

A vampire, a troll and a werewolf.

You won’t get rid of me, though—I will have a regular column starting in next month’s newsletter.