It’s been a busy year so far for us; we’ve been building up the HWA meet-ups—the latest was last Saturday in London, (see some pictures attached) and was a great success. We’ll try and organise another one before the end of the year. We’ve also sponsored Edge Lit, Sledge Lit, FantasyCon, and in general tried to spread the word about the chapter as far as we could; something we’ll continue to do—and it’s nice to see the UK membership expanding as we do. 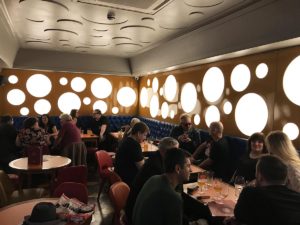 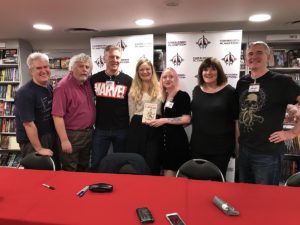 Mostly, though, we’ve been working on StokerCon UK—with our Guest of Honour line-up so far comprising award-winning filmmaker Mick Garris (HOCUS POCUS, NIGHTMARE CINEMA, MASTERS OF HORROR, THE STAND), award-winning novelist and film critic Kim Newman (Anno Dracula, An English Ghost Story, Angels of Music), U.S. author Grady Hendrix (Horrorstör, My Best Friend’s Exorcism, Paperbacks from Hell), Deputy Publishing director of Gollancz Gillian Redfearn, Special Guest Robert Lloyd-Parry (otherwise known as Nunkie Theatre), and our Mistress of Ceremonies, author A.K. Benedict (The Beauty of Murder, Jonathan Dark and the Evidence of Ghosts). Robert will be performing an M.R. James reading as well as readings from Stoker and Machen over the course of the weekend. It’s going to be quite something!

With the Final Frame Film Competition now open for submissions (https://stokercon-uk.com/final-frame.htm), the Ann Radcliffe academic conference, the Bram Stoker Awards® banquet on the Saturday evening—with more events to be announced over the coming months—StokerCon UK is an event you don’t want to miss! For full details of how to book, see https://stokercon-uk.com.