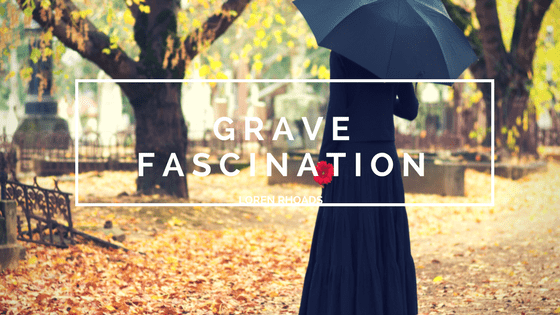 When you go to the graveyard, the stones speak a language that might be unfamiliar. While some symbols keep their meanings for long periods of times over great distances, other symbols change meaning from place to place and over time. I’ll give you some examples below.

There are several good books that will give you a good grounding in graveyard symbolism, if you’re looking for more detailed information. The best reference is Douglas Keister’s Stories in Stone: A Field Guide to Cemetery Symbolism and Iconography. Keister is a widely traveled master photographer, and his book is lovely. My second choice would be Tui Snider’s Understanding Cemetery Symbols. Her book isn’t in color, and some of her interpretations are idiosyncratic, but she’s very thorough in cataloging some obscure symbols. If you have specific questions about symbolism, the man to speak to is Richard Waterhouse at rwsymbolism@gmail.com. He’s been publishing a monthly Symbolism e-Newsletter for 145 issues. He particularly likes tracking down the answers to readers’ questions.

Because I write, one of my favorite recurring symbols in the cemetery is obviously the book. Sometimes books on graves are supposed to be bibles. In the Mission City Memorial Park in Santa Clara, California, Rachel Smith’s book has a bible quote engraved on it: “I am the resurrection and the life. He that believeth in me, though he were dead, yet shall he live.” This is John 11:25, from the story where Christ raises Lazarus—dead for four days—from the grave. 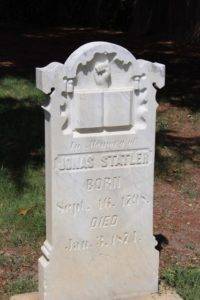 Sometimes the book’s pages are left blank, waiting to be written. That can indicate that this book symbolizes the Book of Life, in which the names of the Elect are written. According to Calvinist Christianity, only those chosen by God before the creation of the world—those predestined—can attain Heaven, no matter what good deeds they did or didn’t do on earth. Jonas Statler was a farmer who came to California from North Carolina and was buried in Mission City Memorial Park, in what’s now the heart of Silicon Valley. It’s likely he was Presbyterian or Lutheran or something similar in life. 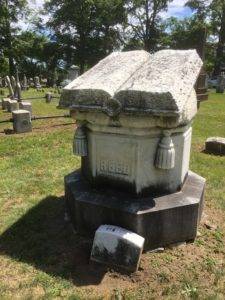 Occasionally monuments of a book are a pun on the person’s name. The family buried in this grave in the Wooster Cemetery in Danbury, Connecticut were named Reed. The surface of this marble stone has weathered so badly that it’s hard to tell if it was ever engraved.

It’s not uncommon to find a book on an author’s grave or even a teacher’s. Even if her epitaph didn’t label her, you know she’s a teacher because of the apple, right? 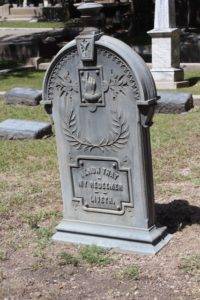 Another symbol you see a lot of in 19th-century cemeteries is a hand. The monument on the right is made of zinc, but its gray surface looks like stone. (You can tell, if you’re in a cemetery, by gently tapping on the monument.) Zinc monuments, referred to in the trade as “white bronze,” are hollow inside. These metal monuments could be ordered in pieces out of a catalog and delivered in the mail. They were assembled on site. This one has a hand with a single finger pointing up, meaning that the person expected to go to heaven. Below the hand is an olive wreath, a symbol of peace that dates back to the Greeks. This monument came from Tulocay Cemetery in Napa, California.

The epitaph: “I know that my redeemer liveth” comes from Job 19:25-26. In the King James version of the bible, that reads, “For I know that my redeemer liveth, and that he shall stand at the latter day upon the earth. And though worms destroy this body, yet in my flesh shall I see God.” For some reason, the worms part of the quote isn’t often seen in the cemetery. Still, the implication is that the person buried here suffered greatly in life, just as Job did.

This pair of headstones stands in Bothe State Park, south of Calistoga, California. The gravestone on the left is illustrated with two hands clasping in farewell. These are unusual in that they are both female hands (you can tell by the cuffs), so probably 13-year-old Rebecca was saying goodbye to her mother. Her sister’s stone is engraved with a hand holding poppies, which mean sleep, alluding to morphine. Twenty-two-month-old Mary Ellen probably died after an illness. Morphine, laudanum, and their sisters appeared in patented medicine in those days and were given to children to soothe them.

I could probably do a post just about hands. Sometimes you find one pointed downward, but that doesn’t indicate the person was expected to go to Hell. Usually, the hand is just an indicator, pointing out the name, the epitaph, or marking a place in a book. Sometimes a hand will be surrounded by a cuff of clouds, to symbolize the hand of God.

I like the theater curtains above the clasping hands on Andrew Kather’s gravestone. For contrast to Rebecca’s hands above, this hand is more masculine. In fact, most hands you see clasping combine a masculine and feminine hand. In Andrew’s case, the clasping hands seem to say that life’s performance is over. Below them are three links of chain, which means that Albert was a member of the Odd Fellows, another fraternal organization like the Masons or the Elks.

Graveyard iconography fascinates me. I think I’ll continue in this vein for a while. If you’ve seen something in a cemetery that puzzled you, let me know. I’ll try to interpret what it means.

Loren Rhoads is the author of 199 Cemeteries to See Before You Die and Wish You Were Here: Adventures in Cemetery Travel. She blogs at CemeteryTravel.com.