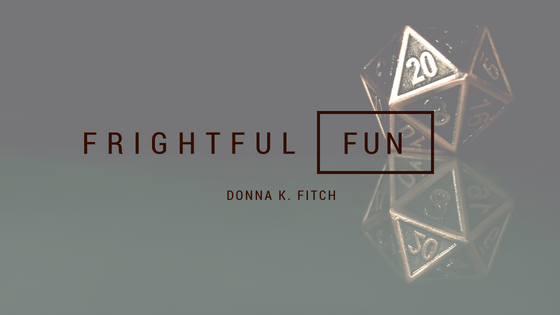 Arkham Horror is a tension-inducing board game set in the Lovecraftian town of 1926 Arkham, Massachusetts. Players move through the city against the backdrop of a looming terror—the awakening of the Ancient One, a terrible monster from beyond time and space! Dimensional gates open at various locations within Arkham, and the investigators must gather weapons, spells, clues, and other tools to close the gates before the Ancient One is awakened. Ultimately, players must cooperate with one another to defeat the monster or have their characters devoured in the attempt.

Fantasy Flight games are beautifully produced, and this one is no exception. The artwork on the box depicting three investigators in a 1920s car, shooting a tentacled horror with Tommy gun and pistol, sets the scene for the game pieces within. The character markers are printed on heavy cardboard on both sides and fit into plastic stands. The various encounter markers (monsters and cultists, gates, activities) are clearly printed and professionally decorated with appropriately scary images.

Players have sixteen character cards from which to choose, such as Joe Diamond the Private Eye, Harvey Walters the Professor, Marie Lambeau the Entertainer, Diana Stanley the Redeemed Cultist, and Carolyn Fern the Psychologist (who resembles a certain red-haired FBI agent on TV). Each investigator has his or her own particular abilities and items. For example, Monterey Jack the Archaeologist starts the game with 3 sanity and 7 stamina. His possessions are $7, one clue token, a bull whip and a .38 revolver, in addition to two unique items and a skill. Monterey’s unique ability is Archaeology, which allows him to draw an extra unique item card whenever he is required to do so, discarding one.

By contrast, Sister Mary the Nun begins with a 7 sanity and a 3 stamina. Her possessions are $0, a cross, and holy water. She also has two spells and one skill. Her unique ability is Guardian Angel, meaning she is never “lost in time and space.” This condition occurs if an investigator is reduced to either 0 sanity or 0 stamina while in an “Other World” attempting to explore and close a gate. Instead, she goes to either Arkham Asylum or St. Mary’s Hospital. The diversity of character abilities means each player has the opportunity to make a difference and contribute to the action.

Each investigator card also includes “The Story So Far,” giving the character’s motivation and back story. The back story doesn’t come into play but is a nod to the board game’s inspiration, the roleplaying game Call of Cthulhu.

What would a Lovecraftian horror game be without an otherworldly opponent? While earthly cultists and creepy creatures abound for investigators to combat (byakhees, wraiths, children of Abhoth, etc.), the Ancient One awakening from slumber is what everyone fears. In the setup steps, a monster is either randomly chosen from the eight monster cards or, depending on the group’s time constraints, deliberately selected. In our play, we tended to choose Nyarlathotep, as we found him easiest to beat. Everyone’s favorites are included: Azathoth, Cthulhu, Hastur, Ithaqua, Nyarlathotep, Sub-Niggurath, Yig, and Yog-Sothoth. (The Dunwich Horror expansion adds Abhoth, Glaaki, Shudde M’ell, and Tsathoggua, all names that give my spell check fits!)

As with the investigators, each monster has its own characteristics. Shub-Niggurath, for example, increases all lower-level monsters’ toughness by one during the entire game. Her numberless worshippers have the “endless” description, meaning they do not become trophies when defeated. Trophies are important to investigators any time, but especially when Shub is the Ancient One. At the start of the battle with Shub, anyone without trophies is devoured. Additionally, her special ability causes an investigator who doesn’t pass a Sneak (+1) check to lose a monster trophy—and the modifier decreases by one each round of battle. If all the investigators are devoured, care to guess who wins? Hint: Not you.

My favorite monster card is Azathoth (abstractly speaking, of course). Its unique ability is “Absolute Destruction.” If Azathoth awakens, the game is over and the investigators lose. Its attack? “The end is here! Azathoth destroys the world.” The moral of the story is: You can potentially beat Shub-Niggurath. You can’t beat Azathoth.

The investigators can win the game in one of three ways: closing the gates, sealing the gates, or banishing the Ancient One. Closing the gates is a major requirement, and just a bit challenging because new gates open each turn. If all gates are closed and the number of gate trophies equal or exceed the number of players, stability is restored to Arkham and the Ancient One goes back to sleep. Much rejoicing! Gates can also be sealed with an elder sign, producing an even better outcome. Although the action costs the investigator one sanity and one stamina, she trades five clue tokens for one of the markers on the Doom Track, turns it on its elder sign side, and places it on the gate. Such an action reduces the Doom Track by one, giving the investigators more time to close gates.

I will not pretend Arkham Horror is a simple game. The setup instructions contain fourteen steps. Each round of game play has five phases. That said, the rulebook presents the instructions clearly. (At least for me. Our gaming group included a couple of dearly-beloved rules-lawyers. We ended up printing the updated rules and errata, which made them happy. Mostly.) The game maintains the flavor of the roleplaying game, Call of Cthulhu, my favorite RPG of all time. Lovecraft’s bleak world view is perfectly exemplified in the unlikelihood of players prevailing against the Ancient One. The tension, especially toward the end of the game, is real, and the feeling of defeating the big bad calls for exuberant celebration. I believe our group played this game five or six times, and we won maybe twice.

If you love a challenge, don’t mind rules, and appreciate excellently produced games, you will enjoy Arkham Horror. If you’re a fan of horror, especially the works of H.P. Lovecraft, you will definitely want to play Arkham Horror: A Classic Game of Lovecraftian Adventure. https://amzn.to/2KX3oMs

In this column, I’ll bring you reviews of horror board and roleplaying games, as well as interviews with writers and creators of such games. Please feel free to ask questions or give me suggestions of games I should review or writers you’d like to see interviewed. Contact me at HorrorGamerDonnaEldritch@gmail.com.

Donna K. Fitch, MLS, is a long-time HWA affiliate member, Silver Hammer Award-winner, and HWA Newsletter Web Designer. She is the author of Second Death, The Source of Lightning, and The Color of Darkness and Other Stories. In addition to novels and short stories, Donna wrote a now-out-of-print RPG supplement on using cemeteries in d20 games, a gaming supplement called Sahasra: Land of 1,000 Cities based on a fantasy India, and a chapter of Scott Carter’s Imperial Age: Faeries. A former librarian, Donna works as a Web designer in the marketing division of Samford University. She and her husband and two black-and-white cats live in a suburb of Birmingham, Alabama.