The first Australian supernatural story ever published was “Fisher’s Ghost: A Legend of Campbelltown,” originally published anonymously in March 1836, but later credited to John Lang. Why am I telling you this? I’ve no idea, really. Just thought it was interesting. It’s almost Halloween, after all. A time of sunshine and shorts. The perfect weather for ghosts.

Anyway, enough rambling. Here’s Greg Chapman from the AHWA to kick us off this month:

The AHWA Committee was recently shocked to hear of the sudden loss of its Vice-President Robert N. Stephenson. Robert’s dedication to the AHWA and the wider horror community will be sorely missed. Robert was responsible for the coordination of a number of projects, including the Short and Flash Fiction Competition. He had also participated in the AHWA’s Mentor Program. We pass on our sincerest condolences to his family and friends.

General Committee Member Silvia Brown has recently resigned from the Committee. Silvia was a Committee member for three years and quickly took on the role of Membership Officer and then Shadows Coordinator. Silvia worked hard to lift the profile of the Shadows and was instrumental in introducing a live Shadows Awards presentation event as part of the Continuum Conventions. The Committee thanks Silvia for her tireless efforts and wishes her all the best with her future endeavours. As one Committee member departs, another joins us, with Alan Baxter coming on board as a General Member. We look forward to working with this award-winning author.

Entries for our annual competition have been slowly trickling in, but our judges are craving more pieces, especially flash fiction works. If you are based in Australasia and have a short or flash piece please consider submitting. AHWA members enter for free. More details can be found at https://australasianhorror.com/competition/.

The fourteenth issue of our digital magazine is progressing well. Almost 30 fiction and art submissions were received for the “Things Are Not As They Seem” themed edition, and our guest editor Deb Sheldon has made her selections. The TOC and cover art will be revealed in the coming weeks. The magazine will be available on Amazon in late November/early December.

Australian publisher Things in the Well have just published details for pre-ordering the Kindle version of their annual Halloween charity anthology Trickster’s Treats’. This issue is number 3, and the theme this year is The Seven Deadly Sins. Cover illustration by Greg Chapman and co-edited by Marie O’Regan (UK) and Lee Murray (New Zealand), with no fewer than seven sub-editors from across the globe. This year the flash fiction magazine is to raise funds for charity: water.

Geoff Brown from Cohesion Press has some excitingly cryptic news he wanted to share: “Another SNAFU story in S2 of Love, Death + Robots. Can’t tell you which story or which author, but we’re definitely in S2.” 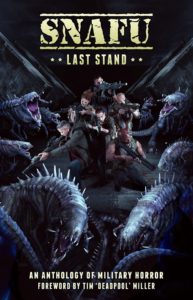 And now for something a little different: Presented by the West Australian Symphony Orchestra, I give you … Phantoms, passions, and love-sick fantasies – Symphonie fantastique.

From the Web site: “Two dream-filled French works frame a world premiere conducted by one of the stars of the new generation, Fabien Gabel. Inspired by unrequited romantic love, Berlioz’s radical masterpiece Symphonie fantastique is full of passions, dreams and phantoms—a lovesick musician’s hallucinatory fantasies. Astonishingly modern and revolutionary at its premiere in 1830, it is still breathtaking nearly 200 years later. Multi award-winner James Ledger is one of Australia’s finest composers. His new Viola Concerto is his eleventh work to be premiered by WASO and was composed especially for one of Australia’s greatest musicians, Brett Dean, himself an acclaimed composer, soloist, and former member of the Berlin Philharmonic.”

October 4-5, at the Perth Concert Hall. For full details: http://www.perthconcerthall.com.au/events/event/waso-symphonie-fantastique

Cassie Hart has set up an online community to help connect Māori, Pasifika, and other Indigenous speculative fiction (science fiction, fantasy, horror, etc.) creatives in the Oceania/Pacific region. As it says on the group’s homepage:

“Aurora Oceania is a community for creators from minority groups in the Oceanic/Pacific region. It’s focused on speculative fiction creatives because I think that we bring some amazing work into the world in the realms of science fiction, fantasy, horror, etc., but come up against extra barriers to getting visibility because a) we’re from a minority group b) which is often only praised or held up as valuable when it focuses on the culture the creator is from and c) in a location where speculative fiction gets a short shrift. And this isn’t okay. Let’s do something to change it.” The Facebook group can be found here: https://www.facebook.com/groups/2270188136628418/

Reposting a Twitter feed from Major General Mick Ryan (@WarintheFuture): “Our next seminar, in partnership with @NSC_ANU is on 3 October. We will examine #Scifi and the study of war and have an amazing line up of speakers including Janeen Webb, Meighen McCrae, Jack Dann, Cat Sparx, John Birmingham, Russel Blackford, and John Scalzi.” 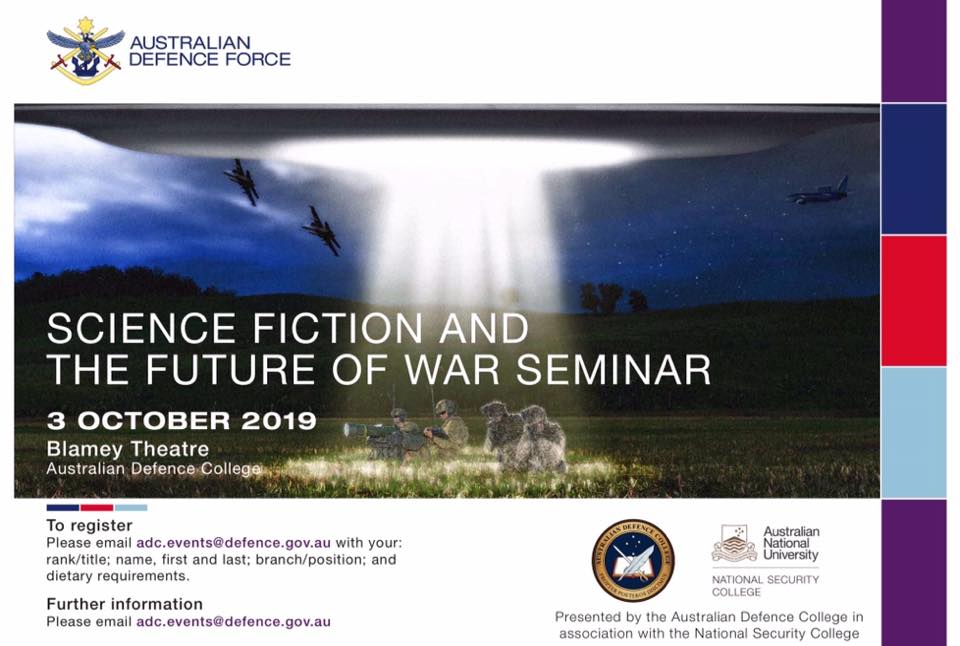 From the Kickstarter page: “The Drowned Earth novellas began as a vague idea of a ‘shared world’ project back in 2018. After publishing our first anthology of Australian speculative fiction, Beginnings, we thought it would be fun to try something a little different … First we had some heated discussion about the type of world we wanted to create. Science Fiction? Fantasy? Set after a deadly virus had been released? Exploring other planets? Possibly inspired by recent environmental crises, we eventually settled on a cli-fi approach to this project.”

Another curious piece of news to flutter in through my window (thanks, messenger pigeon!) was this: “Tramlines is a piece of writing delivered via a unique podcast where writers write a story to be listened to on a tram. The story makes use of the location, the time and the ambient sounds to be part-audio book, part-spoken word, and part-locative literature. We are bringing storytelling to tram journeys through audio tailored to specific tramlines and specific stops—and we are looking for pitches.

“We are looking for imaginative ideas for scripts, specifically tied to one tramline, written for one narrator to perform. Please submit your idea by 5 p.m., Monday, 28 October!”

The Cavern by Alister Hodge was picked up recently by Luzifer Verlag for German translation—a first for Al! 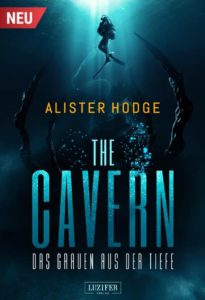 Kaaron Warren appears in The Unique Dreamer, a tribute to Harlan Ellison, edited by Preston Grassmann (PS Publishing). Says Kaaron: “I’m so proud to have a story in it. Harlan Ellison inspired me as a writer and entranced me as a reader.” 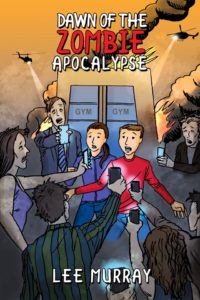 Latest IFWG releases to keep an eye out for:

– Dawn of the Zombie Apocalypse by Lee Murray (IFWG Publishing Australia), a middle-grade horror novel (cover art by Greg Chapman). [Here’s a great interview with Lee by David Kempf: http://www.mastersofhorror.co.uk/2019/08/interview-with-lee-murray-by-david-kempf.html. “I remember loving words, and the sounds the words made, and I liked the shape of them.”] 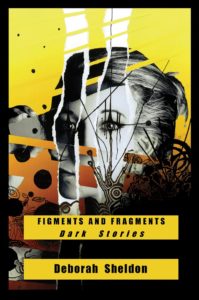 – Shadows in the Stone by Jack Dann, with cover art by Bob Eggleton.

IFWG’s Cthulhu Deep Down Under, Volume 3 has been moved to early next year to avoid marketing saturation. A great cover by Steve Santiago is in the offering, to be revealed in coming months. And, while we’re on all things IFWG, Gerry Huntman was proud to announce that eight of their Aussie and NZ authors attracted recommendations by Ellen Datlow for her year’s best round up.

Conferences coming up in October:

October 5-7 – Conflux; Canberra, ACT. One of the main conventions on the Australian spec-fic calendar and generally features everyone (except me. Again …). https://conflux.org.au/

November 16 – Dark Enchantments. The Australian Storytellers NSW team up with the Australian Fairytale Society to present “a day of storytelling performance and deep emergence into the misty meaning and history of the tales.” https://www.storytellersnsw.org.au/events/2019/11/16/dark-enchantments

As always, if you’re an Aussie or a Kiwi and have horror news, or know of horror-related events or gatherings or anything else at all, let me know at martyyoung2002@yahoo.com, and I’ll include it here.