The Australian spec-fic world is in mourning with the tragic loss of Robert N Stephenson. Robert was a huge personality, a divisive character for sure, but a man with a heart of gold and someone who loved the speculative fiction world with a passion. Robert passed away on August 14.

Robert achieved a staggering amount. He was an award-winning writer of short fiction, novels, and articles, publisher and editor with the long-running Altair Australia, editor at Harbinger Magazine, Edit Avenue, Siddharta Publishing, and other venues, literary agent, poet, teacher, mentor, and so much more. He founded the Peter MacNamarra Achievement Award (now defunct), the Australian Shadows Award (running since 2005), and the International Future Visions Award. His magazine, Altair Magazine, ran from 1997 to 2000, and he was the current Vice-President of the Australasian Horror Writers Assn. He was also a husband and a father, and a friend.

RIP, Robert. You will be sorely missed. Our sincere condolences to your family.

For anyone suffering depression, it can be impossible to know that we’re here for you, but we are. And it’s our job to reach out to you, our friends and family and colleagues, to make sure you’re okay.

Award-winning writer, super editor, and one of the coolest people you’ll meet, AJ Spedding, features in the latest episode of The Story of the Story. This new blog series “seeks to help us understand our favorite authors, and to give them a chance to tell us about something they’ll positively gush about: their favorite story.”

In this week’s episode, AJ discusses her short horror story “The Whims of My Enemy,” a “harrowing tale about prisoners playing a deadly game at the behest of mysterious and cruel captors, and it all takes place in a deathly train car.” Check it out at http://www.buzzsprout.com/337568/.

From their Web site (https://www.huntedexperience.com/): “Dark Lake Reborn is an immersive walk-through performance. Actors guide you through the storyline that includes you and makes you a part of it. This experience also includes puzzle solving and mystery elements.

“Participants enter Dark Lake Reborn in small groups, maximum of eight at a time. At least one person in your group requires a smartphone. The experience is between 45 minutes and an hour, depending on how quickly your group moves through the experience.

“At a secret location in Perth (near Cannington), you download a location map when you book your tickets.”

With multiple dates from September 20 through until November 30 in Perth, plus other dates across the country, I’m sure you can get yourselves scared silly!

Check out the website for more information, or the FAQ page here: http://www.interactivehorrorexperience.com/faq-1.

Some new Aussie/Kiwi releases to keep an eye out for:

Due for release on September 17, Served Cold is Alan Baxter‘s second volume of collected short fiction. Collected together for the first time ever, these sixteen provocative and intensely chilling tales by multi-award-winning author Alan Baxter venture into the depths of the darkest and most shadowy places where unspeakable horrors are the predators and we the willing prey. Prepare for an always terrifying, frequently heartbreaking journey in multiple stages, each piece echoing Baxter’s unique voice that effortlessly blends horror, fantasy and the weird, cementing his place as a modern master of the dark fantastique, and resulting in an unforgettable volume of fiction. 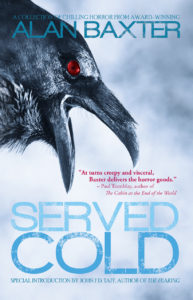 Jason Franks has a new book up for pre-order. Shadowmancy will be released on October 15, and it’s a short novel with a dozen interior illustrations by Nicholas Hunter. Jason says, “It … says Dark Fantasy and it’s about a magic school but … I approached this as a horror novel. I think anyone who comes looking for Hogwarts here is going to … not get what they want.” On a mountain that does not exist, there is a school where they teach the impossible. From his first day at the Academy, things are difficult for Quay. Though he has surrendered his name, like every other acolyte at the magical school, Quay is the son of a disgraced professor, and he finds that his father’s old enemies are already lined up against him–while the professor’s own faction is just as suspicious. Quay refuses to take a side, but as his powers grow it becomes apparent that the damaged young boy may prove a greater threat than his father ever was. Deep in the Library of Shadows, Quay finds a way to survive his father’s treacherous legacy, but the price is high indeed.

“A strange, mysterious and compelling read told in spookily disconnected first-person narrative, delivered by a likeably unlikeable main character. A subtle and dreamlike tale.” –Sam Bowring, author of the Broken Well trilogy. Pre-order links: https://argonauticapress.com/?product=shadowmancy. Keep an eye out for a Halloween launch. 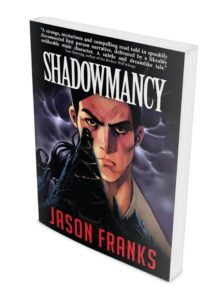 Chuwa: The Rat-People of Lahore by Brian Craddock (https://www.smashwords.com/books/view/942121). Jasmine is wanted by both mafia and monsters, navigating Pakistan’s back-streets as she tries to save her kidnapped husband. But a bite from a mysterious creature is changing her, and the supernatural world is stepping forward to stake its claim. Can Jasmine beat the clock and save her beloved?

Here’s a sneak peek from the book: At their feet flowed a shifting tide, undulating as it swept around corners, keeping pace with the robed errand-keepers. It squeaked and squabbled with its progress, this tide did, claw and tooth flashing from its dark currents. Only when it followed its masters across the road did the dull illumination of the street-light show the gnashing tide to be a river of rats, squabbling amongst themselves for prize place closest to the feet of the errand-keepers.

A homeless man sat up from his bedding of tarpaulin as the tide approached, beseeching the figures for alms, just a modest token of generosity with which he might purchase some flat-bread later in the day. He was summarily ignored, by the errand-keepers, at least; but of the rats that followed, not so. They swarmed toward the man before he had sense enough to flee, enveloping him and stifling any cry for help he might have been ready to beckon. 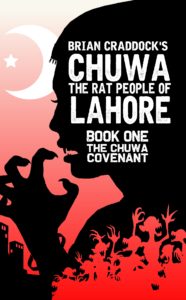 Seventeen stories. Seventeen tales of terror. If imperfection is crucial to a society’s survival, what makes a monster?

“Visceral and demented, full of flesh that twists and deforms … Fitzpatrick’s stories will either sicken or delight. There’s only one way to find out which way you’ll swing. Fitzpatrick’s protagonists are among some of the most unique I’ve come across in fiction: almost singularly they are fixated with notions of the flesh, be it in its transformation or in its consumption.” – Brian Craddock, Australian Shadows Award-Winning author.

[On “Scents”] “One of the creepiest stories I have read in a long time.” – Jeani Rector, editor of The Horror Zine

“Wonderful carnage amongst the formalities and forced smiles.” – Aaron Dries, author Of A Place For Sinners.

Claire’s collection can be found at https://ifwgaustralia.com/title-metamorphosis/. 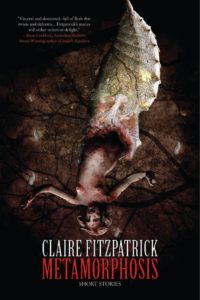 The Macabre Modern and Other Morbidities by Kyla Lee Ward (P’rea Press) was released on August 4. Inspired by the fourteenth century “Danse Macabre” (the Dance of Death) in the cemetery of the Innocents, The Macabre Modern transcends time, updating for contemporary readers the allegorical, medieval concept of the universality of death.

Defy death with the doctor. Mourn with the soldier. Indulge in the rich, weird traditions of Ancient Egypt and the Victorians, as you trip over the unspeakable at your own front door. Chuckle at the grotesque and the fallible but remember, the last laugh will be on you!

With a sharp wit, compelling satire, and fervent, feverish imagination, Ward generates fiendishly compelling vignettes of the human drama, and offers a profound reflection on life.

Includes the Australian Shadows Award-winner, “Revenants of the Antipodes.” Illustrations, including cover artwork, by the author. http://www.preapress.com/books.php?isbn=9780994390127 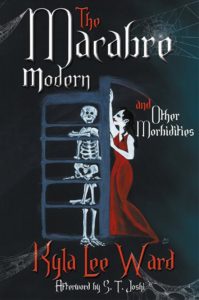 Aurealis #123 – features “compelling new fiction as well as the usual generous serving of nonfiction, reviews, and stunning artwork. It has everything you could possibly want in your speculative fiction.” https://www.smashwords.com/books/view/952262

Conferences coming up in September:

If you’re an Aussie or a Kiwi and have horror news, or know of horror-related events or gatherings or anything else at all, let me know at martyyoung2002@yahoo.com and I’ll include it here.