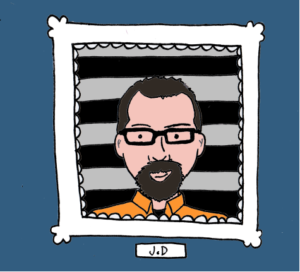 It’s June already and I’m pleased to introduce a man of poetic merit, JD DeHart. As a poet who shares the same elements JD mentions in his first paragraph, I related immediately to his work. He is a writer and teacher. He has been writing poetry and other creative works for the past few decades. DeHart’s collection of speculative poetry, The Truth about Snails, is available from publisher Red Dashboard.

Exploring Poetry in Many Shades

Although I write in many shades about many topics, there are certainly times when I tell stories that have an element of darkness. Sometimes this darkness is very rooted in earth, and sometimes my love of science fiction and fantasy causes my stories (in prose and poetic form) to float outside of the world a bit more.

This sense of darkness is a part of the human story, most embodied by our love of supernatural films and books, and it has certainly proven to be part of my work. So, if the telling’s honest there are many nuances to navigate in the world of writing, including the shadows and mysterious corners of human experience.

Sometimes this exploration of human life leads to a poem that I enjoy enough to reread a few times, and sometimes the fantasy element is woven in a little more tightly. One such example is “Dollhouse,” which was published by The Fear of Monkeys in 2014:

Each doll is arranged and crafted
Carefully, dressed to the tiniest detail
A child’s hand was so cautious
Delicately placing until lights dim
All hell, as they say, breaks loose
Mother doll takes out her minute flask
She is tired of this toy ordeal
Father doll stays on the computer
Doing “research”—mother knows
What that means, this is not her first
Rodeo, oh buddy oh boy
She even has a program to track
Her doll husband’s online movements
Baby doll is trying desperately to find
A way to tell them she is pregnant
Do not worry—she is in love, the daddy
A military man from the guest room
There is a sound in the yard, if you could
Call it a yard, and Father doll goes to check
Screaming profanity at the neighbor’s dog
Brandishing his useless plastic shotgun
Step away from that window, Mother doll
Says, You are just a plaything
Father doll returns, deflated, plopping down
On the couch that is never comfortable
While the child snores lightly in her bed.

This poem was my attempt to bring some reality into a shrunk down world of a dollhouse, adding hints of sorrow and humor. The monsters lurking here are just bad luck and poor decisions.  There are, of course, other times that I treat my inspirations differently.

As a young reader, I enjoyed EC Comics as much or more than mainstream graphic novel stories and junior novels. These EC books featured short tales in compilation, often with a clever twist, and were brief pieces of macabre entertainment. No wonder I would later explore Stephen King’s novels as an adult reader, as well as the writings of Anne Rice and Neil Gaiman. Even the dark side of science in books by Michael Crichton appealed to me, and I engaged with them readily since my adult reading life predated JK Rowling’s work.

There were other books that piqued my interest, too. I have written before about my affinity for Mike Mignola’s take on Bram Stoker’s Dracula in visual form, published by Dark Horse Comics.  Mignola is, of course, known for his character, Hellboy, as well—yet another creature living in dark corners. It seems that moonlit paths are forged through many of the stories, visual and otherwise, that I have enjoyed over the years. I found a similar affinity for a Creature from the Black Lagoon comic I read voraciously as a teenager.

Monsters have populated my reading life, from mythological creatures to Universal classic characters. A quiet trip to the river to do some fishing would turn into an imaginative account with whatever might be lurking under the surface of the otherwise calm rural waters. I crafted stories in notebooks featuring some of the mainstream comic book and film heroes I enjoyed in ferocious battle with fictional beasts. I believe that what we read informs what we write, and this was certainly true for me.  Here is an example of a short poem I wrote, including a more traditional monster:

The elongated face remembered
from some distant place,
a sphere we visited once,
the translucent skin, the invitation
calling to us through the wooded
star-gazing plain, and the tone
cold as malice, swift as the end.

This one was published by Yesteryear Fiction, also in 2014, and it’s kind of a late-night creature feature told in only words with no illustrations or flickering lights.

When it came to practicing my own craft as a poet, I remember one of the first “dark” pieces I wrote. It was for a summer writing conference I attended in high school. I submitted a swath of material covering many genres in hopes of showing off my talents.

It was the job of a small group at this conference to read and critique each student’s work, and the group leader chose my dark poem among the myriad of offerings. It was met with disdain by the rest of the writers and the rules of the game were that you were supposed to sit and listen to the critiques and then respond at the end, not simply because it was a product of my high school flirtations with composing but because what the group considered to be the shock value of the poem’s macabre ending. I have no idea what my response was, but this initial experience with darker works not being appreciated is one of the likely reasons I turned away from that avenue of expression for a while.

These days, I continue to practice writing in as many ways as I can, both in light and in darkness. A mentor recently told me that he writes for himself. To be honest, as I write this, I am composing because I enjoy the process but there is also an invisible audience in mind. In 2014, with a similar invisible audience projected, I wrote a collection of science fiction poetry—and some of them were even dark. The writing took place over a series of snow days, giving me time away from my teaching job to explore. I had dreamed of writing a book for years—who knew that it would be my love of science fiction that would finally inspire me to root my body in a chair long enough to make a manuscript take shape?

Beyond that one collection, I have also discovered a number of other venues that have featured some of my speculative/dark work, including Illumen and Zetetic. I leave you with a small sample of some of the poems, largely inspired by my love of comic book characters and science fiction, that were featured at the now-disappeared UFO Gigolo site in 2015. I am also including one more example that I have been working on more recently.

She wore a wide-brim blue hat
and an ice blue coat, skin
of similar feel and shade.
A name I can no longer remember,
and could never pronounce
from a land I have never been to.
Visits came in the evening when
the kids had gone in from playing
and the streets were silent.
Everyone’s early buzz gave her
safe passage. We loved, passing
through one another, and she
always left, not a trace of scent
or warmth behind, only the brief
memories that even now fade.

a web, continuous
network and we are
engine rumbling roving
through the fallen
universe where ragged
figures roam and linger.

His face is the grill
of a car, his mouth uttering
the diesel fumes.
Arms like axles and palms
like rolling wheels.
He can tell you the lay
of the land as far as eye
can see, then farther.
He’s been up the highway,
married to it, loving it,
holding his face close
to the white strip lapping by.
Another turn,
another endless run.

I recommend caution. Wolves
only talk when they are the villains
in stories, or at least trying to obfuscate.

Remember there are paths and trails,
breadcrumbs but also monsters.

Neil Gaiman is quick to remind us of many
fairy tale truths. Authors hold the keys,
so enjoy them and pass them on to others.

You have an author living
within every story you know. You
have collected your tales.

Now spin them, and let all
the animals do the talking.