Once again, I’m delighted to feature poet Lori Lopez! As you will find in the following essay, she shares her trials and travails over the past year to get her full-size poetry collection, Darkverse: The Shadow Hours, into a print version.

Lori R. Lopez has a lot going on beneath her hat, much of it too weird to mention … mostly dark and inky and preoccupied with horrors. When she isn’t busy being strange, she’s a poet, author, and illustrator with works in HWA Poetry Showcases, The Horror Zine, The Sirens Call, Weirdbook, Bewildering Stories, and California Screamin’. Her books include Darkverse: The Shadow Hours, Leery Lane, The Dark Mister Snark, The Witchhunt, and An Ill Wind Blows. Lori resides in Southern California with cats and two sons. Together they run Fairy Fly Entertainment, a creative company. While the cats are very entertaining, they’re too lazy to lend or lift a paw, so Lori and her talented sons are left to do everything themselves.

I was invited back to share the journey from e-book to illustrated print edition for my epic-sized poetry collection Darkverse: The Shadow Hours. Here then are my reflections while retracing those footsteps.

Illustrating and laying out this volume of Darkverse for paper was no simple feat. It was rather daunting and demanding. We’re talking about seven hundred fifty pages, fifty unique illustrations, and various repeated art details. A task requiring double the illustrations I would normally do for a novel or collection. This book demanded more because it encompasses such a large quantity of my darker poems, over two hundred and fifty. With names like “shadows,” “The Darkest Hours,” “That Step,” “Death’s Viper,” “fearing the worst,” “Cold Feet,” they represent years of verse.

At last I can hold the result in my hands. It’s very good for strengthening one’s biceps!

Measuring eight and a half by eleven inches, about one and a half inches thick, the book makes a lovely gift because it’s a keeper. Either that or it makes a good door-stopper.

Lest you think this is a commercial, let me return to the verse and art. For this collection, I had chosen horror and speculative titles from the first three volumes of my book series Poetic Reflections. The next step in assembling an illustrated print edition: I very much enjoyed selecting which poems to embellish with my drawings. All part of the fun.

Unlike creating one piece at a time, when you illustrate a book, it is less of a relaxed experience. There is a list to complete, and like most lists, it may seem a bit imposing for a while. Plus, when I am drawing I tend to miss writing—an activity that calms, even heals me. Drawing for weeks and weeks, I cannot get a lot of writing accomplished. I may become frustrated, impatient. A single drawing might take days (or days and days) to finish.

So it isn’t surprising that I often put off doing art.

I published the e-book of Darkverse in late 2017. And labored on most of the illustrations during 2019. Well, I was busy. I’m always busy. Usually writing. It’s a struggle, a wrestling match, to tear myself away. It’s pretty amazing, in fact, that I got the book done.

I must thank my sons, especially Rafael, for their assistance in the publishing. I did a lot myself, but we have a creative company called Fairy Fly Entertainment and work together, helping each other with projects when needed. They handled some of the more technical aspects.

Okay, now for the best part, a look at a few illustrated poems.

There are bilious black slugs inside my skull
That slither and cling to the walls and roof
Causing them to itch
The things interfere with my waking thoughts
Interrupt my sleep with trails of dreck
And wrest electric screams
From my soul’s unbottomed eternal pit
Like plump dark worms that creep from earth
Escaping a loamy grave
They send shivers down neck and spine
And make the backs of my orbs squirm
While their bodies quiver
Wiggling about, slinking on bellies
The slimers crawl in and out; they tickle ears
Worse than any feather
I can hear them giggling. It echoes, you see
Which can draw attention to the sediment
On my drooping shoulders
The cornflake dust from pouring cereal
Upon my head in an effort to lure them
And seal my ears
With wax, for I am weary of headslugs
Rubbing my brain, slurking like fiendish grubs
Like a dog wishing
To shake them back from whence they hailed
So that I could have a moment’s peace
Without feeling them move.

(From Poetic Reflections: Blood on the Moon, 2018) 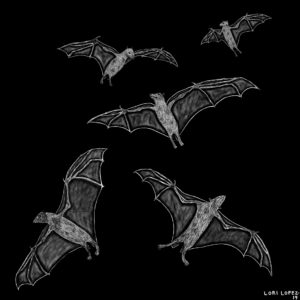 The birds of night flap broodful wings
Against the pewter clouded mist
Though sleep might claim most
At this hour of witchcraft and ghoul
Their leather-like flails evoke a restless
Energy for mischief, screeching and silent
Diving enmasse; swimming the air like fish
With bursts of upthrusts and echoing reports
In the quiet of Nocturnity; like swarms of bugs
Cluttering the sky against a lunatic pall
Keening in graceful plummets of precise formation
Their dense fraternity defined by echoes
They are swept aloft like a flight of starlings
And greeted with a similar disapproval
The same unpopularity of rodents
Rakishly adorable, these vermin of Twilight
Fit into the overall design, the fragile balance
That maintains the environs of a delicate planet
Like thread or glue, binding the seams
Holding the links together
Once in seemingly inexhaustible supply
Labeled pests, they have dwindled with wolves
And other species competing for space
Food and water, the right to exist, to survive
And roam free by land, sea, or sky.

(First published in Poetic Reflections: The Queen of Hats, 2014)

She was just a girl, giving birth to a legend
In a flash of horror, a monster was born
The invention of ghouls would be nothing new
But this one had heart and it beat forlorn

From a mad doctor’s lab, the corpse on a slab
The sum of a man built in pieces of death
A jaundice-eyed fiend stitched by charnel design
A jigsaw of fragments until his first breath

How that aberrant moment when life was jumpstarted
Would jolt the world like a bolt of thunder!
His ghastly pulse brought rejection and shame
To the sinister figure of a scientist’s blunder

This object of guilt and forged conception
Of miserable tainted vanity
Perpetual loathing, parental regret
How much his plight would mean to me

The society that shunned was the same to love
A cumbrous ogre, the patchwork creep
I was just a girl when I watched and read
His tale of torment; the words made me weep

A thinker who practiced her own ideals
While sifting the notions her parents had
Rebelling, embracing, at times she would bend
To society’s ways or the will of her dad

Like me, she read and scribbled stories
Happiest as a child away from her life
With another family or in the Cemetery
To read near her mother and escape the new wife

The story she drafted, and then the book
Yet more than a single horror tome
She wrote stories, novels, and of their journeys
While the couple moved from home to home

Frankenstein bore vestiges of Mary’s creation,
And the horrors of death known intimately
Along with her wretch, the two opposed eating meat —
“Vegetarian” for animals, like my sons and me

The pair would wed as lovers do
Four children died, just one survived
Her husband’s death by accident
Left a spouse and little boy deprived

Mary edited and released his poems
To help Percy Shelley’s verse be read
Promoting his name, increasing his fame
Too soon she herself would join the dead

The Mother Of Horror gleams strong today
More recognized than the man she’d marry
Gone a century before my birth
Yet the horror she wrote is still scary.

Just a taste of the variety in themes and styles that abound throughout the bulging collection, along with flies, shadows, and bats. There are also poems spinning tales of ghosts and frightful creatures, villains or demons.

My thanks again to Marge, and now I must bid adieu for my headslugs are itching! It is time to write something deep and dark …