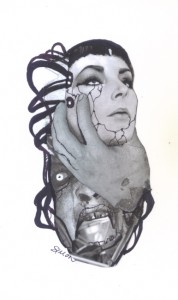 With well over 100 submissions from around the world, the Inaugural HWA Horror Poetry Showcase has come to an end. There was an astounding breadth of subject matter and themes and styles and all of them had one thing in common: the desire to scare the reader, to shine a light into the darkness. It has been a tremendous honor for all those poets to trust their poems to us.

In addition, I wanted to thank Marge Simon and Jonathan Maberry for their dedication to the Showcase. Many hours were spent discussing these poems and I’m thrilled to finally be able to announce the first Featured poet for the HWA Horror Poetry Showcase. Throughout the month of May, one Featured poet will be announced each week.

These four poems went through an intense debate and, in the end, we are proud to have them represent the Showcase.

In order to get a little behind the scenes view, I asked fellow Judge, Marge Simon, about the past month of reading the submitted poems:

I believe poetry is a vital part of the history of the written word (beginning in Medieval Europe as songs played by wandering minstrels to carry news and to entertain people in scattered towns). Poetry has been around long before that, most notably developed by Greek scholars. And when we think of horror poetry, we think of E.A. Poe’s “The Raven”, which is our own HWA logo.

As a side note, I’m also pleased to discover more editors are now open to including a bit of dark poetry in their collections as well. It was a practice of the small press early on, and I hope it continues.

Finally, if you submitted and your poem contained forced rhyme, or had a trite theme—I’m sorry, but it just wasn’t the type of work we were looking for. I suggest you study poetry by the best contemporary dark poets and examine what makes them work so well—and you’ll find some good examples in those that we chose for the HWA Dark Poetry collection (title to be determined).

Also, there will, indeed, be an electronic chapbook of those poems we thought worthy of publication by the HWA. Some of those poems were serious contenders to be Featured and all of them show the talent, creativity and brilliance currently writing dark horror poetry.

In no particular order, here are the first two Featured poems:

Monster, Me
By Stephanie Wytovich

Inside of me, there’s a sickness. A darkness that breeds and snuffs out
the good, filling me with screams and cobwebs and an emptiness
that infects everything that was once alive. It’s a slow death and I feel
everything: every touch, every kiss, every parting. Sometimes I even think my
heart
stops beating; it just quiets and goes kind of still, barely working until it’s not. I know it’s her, and I know she holds me tighter than any lover I’ve ever known, and I hate her—but oh do I love her—and no matter how hard I try to fight, how desperately I try not to give in, she’s always there, waiting, ready, and willing to take me as I am. Broken. Tired. Weak. She loves and accepts the tragedy of my being and she understands the cuts and the bruises, the stitches
and the scars.

I call her monster and she moves within me, finding her comfort spot
where she nestles down deep until her arms are mine, until my legs
are hers. I see through two pairs of eyes, and breathe with four lungs, and the
disease
that breeds in my stomach is not a cancer of the flesh, but a mutation of the heart.
She’s
the cure to my epidemic, my anti-suicide machine, and together we/I walk through this life, holding hands and hearts, whispering secrets and drinking down poisons, mixing black magic
remedies and sucking down sage, and together we/I live, somehow we/I survive. My monster, me. The Jekyll to my Hyde.

Stephanie M. Wytovich is the Poetry Editor for Raw Dog Screaming Press, a book reviewer for Nameless Magazine, and a well-known coffee addict. She is a member of the Science Fiction Poetry Association and a graduate from Seton Hill University’s MFA program for Writing Popular Fiction. Her poetry collection, HYSTERIA, can be found at www.rawdogscreaming.com. Follow her at stephaniewytovich@blogspot.com and on twitter @JustAfterSunset.

Truth to tell, I was never a big fan
of raw veggies, either before or after,
and ironically, when it comes to grilling
meat, I’ve always eschewed the rarer cuts,

preferring extra char on my steaks
and ribs. So imagine my surprise
when this new diet most of the world
is now on, with its instinct-guided

mono-eating and emphasis on totally
unaltered food turned out to be
a real godsend. I’m shedding weight,
barely seem to need any sleep,

and my heart no longer pounds
whenever I exert myself. Who, too,
would have thought that something
a.k.a. the Caveman Diet

could resurrect long dormant senses,
like night vision or acute sensitivity
to smells, or a boyhood love of hunting?
But it has—as well as eliminated

any desire on my part for salt, pepper,
sugar, caffeine or processed fat. From
now on out, it’s strictly food as close
to natural and original as possible,

the same way, fresh down from the trees,
our paleolithic ancestors ate: uncooked,
unprocessed, unspiced. As for those
who’ve never seen the light (but whose

numbers, thankfully, are dwindling), they
who continue to contaminate or pollute
their bodies with chemicals and additives,
who cook the living daylights out of their food

with fire or chemicals, or even more
outrageously claim our diet is dangerous
and a menace to mankind — well,
evolutionarily-speaking, they’re now

the new equivalent of ancient Neanderthals—
even if raw and still twitching, on the run
or freshly harvested, the best of available
foodstuffs, delicious down to the last morsel.

Robert Borski did not begin to write poetry until he was well into the middle of his sixth decade—hence his frequent description of himself as a late-blooming child prodigy—but since then has had well over 200 poems published in such venues as Asimov’s, Dreams& Nightmares, Strange Horizons, and Star*Line, as well as a first collection of verse, Blood Wallah and Other Poems (Dark Regions Press). He continues to live in Stevens Point, Wisconsin, where he works on behalf of the state university system.