Happy Friday All! Today marks the last interview spotlight as Halloween Haunts welcomes writer, artist and poet Robert Payne Cabeen. At Stokercon this past spring, Robert was the recipient of the Bram Stoker Award for Superior Achievement in a First Novel for Cold Cuts (2017, Omnium Gatherum Media).

Halloween Haunts:  Welcome Robert! You have worn a number of career hats over the years, having become an accomplished artist, poet and writer. Of the three, which came first for you?

Robert Payne Cabeen:  Thanks for including me in Halloween Haunts, Michele. I’d have to say that art came first. I recall being obsessed with drawing airplanes, as a kid. Around fourth grade it was all dinosaurs and monsters, then just monsters–until art school. Otis Art Institute had a rigorous classical curriculum–drawing, painting, sculpture, and design. It was like art boot camp. So, after acquiring that hard-earned skill set, what do I do with it? Monsters. Guess ten-year-old Bobby still gets his way.

HH:  At what point did the written word and visual coalesce for you?

RPC:  Pretty early on. At some point it became obvious that the monsters I was drawing needed names. Once they had a name, a graphic description of their horrific talents was a must. Once I started down that corpse littered road I was bound to wind up in Antarctica with a horde of mutant penguins.

HH:  Can you share your first time when horror, terror and all things creepy crawly became a part of your world?

RPC: My mother was a closet horror fan, life-long movie buff, and the first woman executive at Paramount Pictures. For some reason, my father hated going to movie theaters, so my mother would take me instead. More often than not it was a horror movie. I’ll never forget seeing “The Tingler,” starring Vincent Price in a theater. I’d never seen adults scream before. That was more disturbing to me than the creature, but I liked it–I liked it a lot. I remember thinking that someday I’d like to make grownups scream. It wasn’t until years later that I learned William Castle rigged some of the theater seats with a vibrating device that activated when the parasitic creature crushed its victim’s spine. The Tingler was quite creepy and ever so crawly. 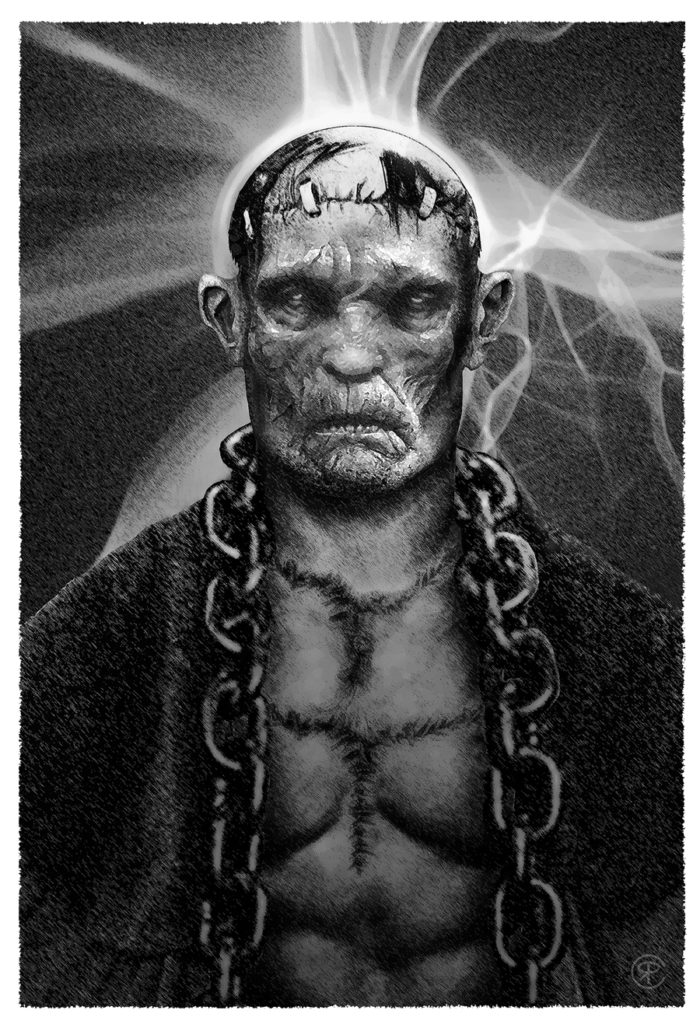 HH:  Before asking about your current project, I would love to segue to an older project for a moment. I think that your skills as a writer and artist are often understated, because you seek to engage with readers’ senses in an unanticipated way. For example, with Fearworms: Selected Poems you make poetry approachable, horrifically delicious, but crucially, you encourage readers to make it an audible experience. Why was that important to you?

RPC: As far as I’m concerned, when someone reads one of my poems aloud, it belongs to them as much as me. When I was in high school, I’d gather a crowd of friends together and we’d go to the local IHOP on Friday nights. I’d jump up on a table and recite poetry–Poe, Kipling, Coleridge. I own those poems now, they’re part of me. I want readers to own my poems. To that end, my publisher, Fanbase Press, rebound “Fearworms” with spiral binding so it opens flat, making it easier to read aloud.

HH:  Getting back on track, you are working a current project about Mary Shelley. Can you tell our readers more about it?

RPC: “Birthing Monsters: Frankenstein’s Cabinet of Curiosities” is a tribute anthology honoring Mary Shelley, but it’s not limited to Frankenstein. It includes a variety of short fiction pieces inspired by synthetic biology, genetically modified organisms, artificial intelligence, and the creation of one life at the cost of others. There are also several scholarly essays about Mary Shelley’s work and times. I contributed 12 black and white illustrations to the book. They’re some of my best work. I’m proud to be part of this landmark project. 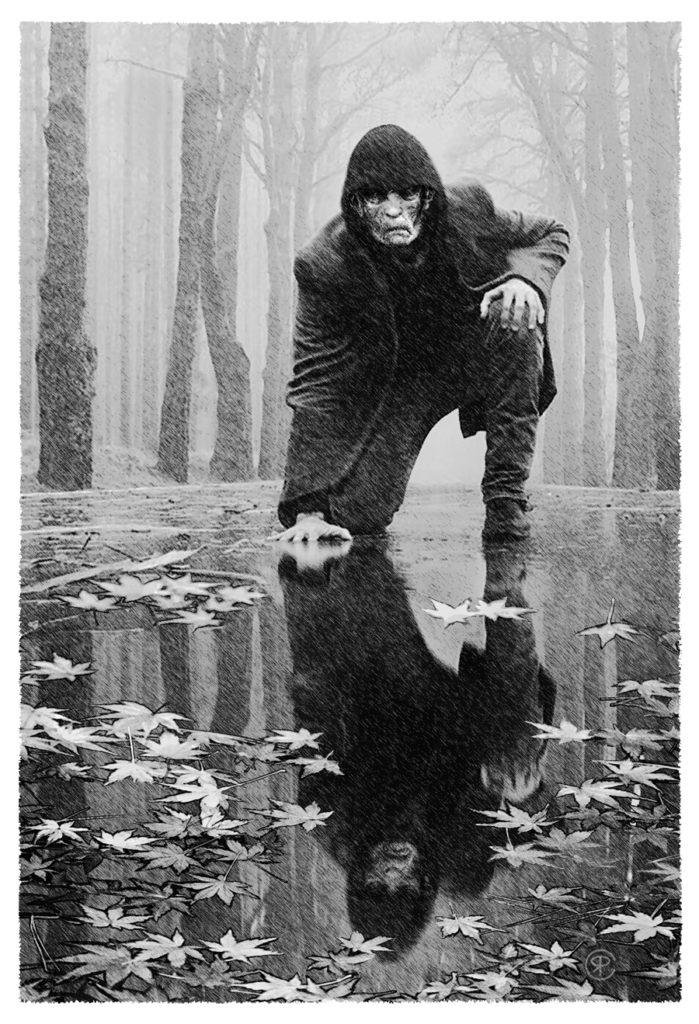 HH:  This year marks the 200thanniversary of Shelley’s seminal novel, Frankenstein; or, The Modern Prometheus, which has understandably received much attention this year. Did you encounter challenges in working on Mary, Mother of Monsters and Frankenstein: The Birthing Monsters Suite (a portfolio of 12 limited prints) as a writer and artist?

RPC: Creating a major body of artwork is always challenging, but I’ve wanted to illustrate “Frankenstein” since I saw Lynd Ward and Bernie Wrightson’s take on the subject. Of the 12 drawings, my portrait of Mary Shelley was the most challenging. To my eye, none of her historical portraits captured her rebellious spirit or intellectual intensity. My version is more like a moment in a movie scene. I also wanted it to look like her. Luckily, I found photos of a lifetime, portrait sculpture of her in a Sotheby’s catalog.  The most daunting challenge was writing, “Mary, Mother of Monsters,” my short fiction piece that puts Mary Shelley’s portrait in context. The hitch was that the only way to make it work was to write it in the dreaded second person–from the reader’s POV. The reader becomes a drug and alcohol addled Percy Shelley as he interrupts Mary conjuring her literary monster. She is not amused.

HH:  What themes did you explore in your art?

RPC: Who is the monster in this story? Victor Frankenstein is cruel and self-consumed. By today’s standards, he’s probably a sociopath. The creature’s murderous brutality is clearly the product of his abandonment by his creator. I wanted to convey the creature’s sorrow, isolation, and self-loathing. One of the drawings depicts the creature gazing at his reflection in a pond.  When I showed it to my wife, Cecile, she wept, so I guess it got the point across.

HH:  And, did you come away with new insight about Shelley and her novel?

RPC: Apart from the novel’s obvious literary merit, Mary Shelley’s historical significance fascinates me the most. As timely as her 200-year-old novel is today, her struggles as a woman author mirror the obstacles women face in our current culture. 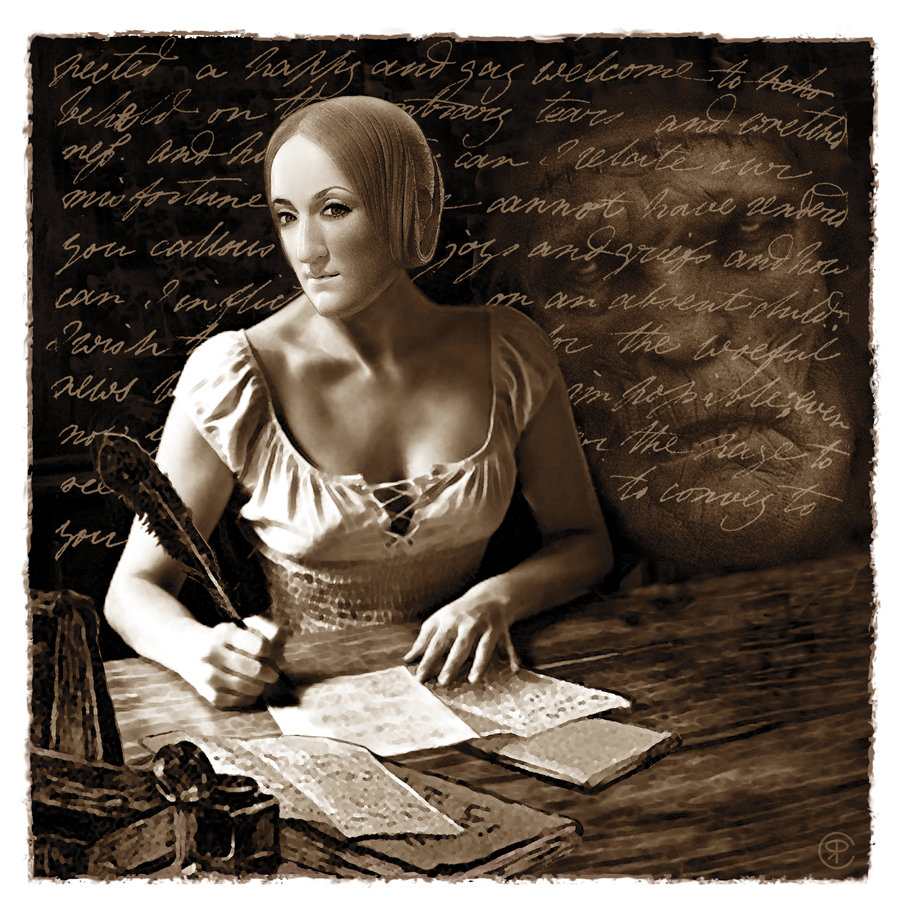 HH:  Can you share what you are currently working on? And, can you share the pertinent details of your upcoming signing?

RPC: I finished the first draft of the Cold Cutsscreenplay before I began the Frankenstein suite. I always let scripts log some drawer time before I begin polishing.  So I’ll start back on it after all the Halloween reveries subside. I’m really looking forward to the “Birthing Monsters: Frankenstein’s Cabinet of Curiosities” signing. Contributors from near and far will descend upon Dark Delicacies, Sunday, October 28th, at 4 pm. 3512 W. Magnolia Blvd, Burbank, California 91505. My signed and numbered limited edition prints will be available at a reduced price. I’ve collected all 12 in a portfolio–“Frankenstein: The Birthing Monsters Suite.” Limited edition, sepia prints of Mary’s portrait will also be available. Some will be given away to unsuspecting book buyers. This is a full on release party with refreshments and prizes.

HH:  As we wrap up Robert, where can people find you and your artwork on social media?

RPC: Facebook is the best place to find me.  New friends are always welcome in my world!

HH:  Robert, thank you so much for your time and for sharing insight into your craft!

TODAY’S GIVEAWAY: HWA is giving away an e-copy of F. Paul Wilson’s novel Freak Show. Comment below or email membership@horror.orgwith the subject line HH Contest Entry for a chance to win.